The East Coast was a little soggy last week as I made my way to Manhattan for a tasting of Spanish wines. It was the sort of rainy, humid, New York City mess of a day that makes one want to stay inside, but I’m glad I overcame my weather-induced sloth. A train and two subway rides later, I managed to arrive early at my destination on the lower east side.

My reward was a private audience with Justin Berlin of Spanish Wine Exclusives who gave me a detailed overview of their portfolio of seven limited production wines that are only available in the United States through Tinto Fino, the little Spanish wine shop that Gabriella wrote about last year. The cozy inside of the shop with co-owner Kerin Auth chatting away in perfect Castellano reminded me of stepping inside a welcoming establishment tucked into the labyrinth of streets in Seville’s Barrio de Santa Cruz.

According to Justin, Spanish Wine Exclusives (SWE) is a joint Spanish-American collaboration between himself (a New Yorker) and another Spanish wine industry veteran, María Alvarez of La Rioja, Spain, who I also met at the tasting. The two search for wines that are small production (no more than 6,000 cases per vintage) and have an interesting story behind them. All of these stories along with producer information, tasting notes, label images and videos are documented in detail on SWE’s website.

Though I have no way to comparison shop, Justin says that by eliminating an expensive sales force to distribute the wines to multiple outlets in the USA and selling exclusively through their retail partnership with Tinto Fino, they can offer these wines at prices that are typically 20-25% lower. Tinto Fino can ship wines to about 31 states. Ironically, New Jersey, where I live, is not one of them.

The seven wines were of varying styles from subtle and earthy to very fruit forward. All of them were very nicely balanced. The lineup included a couple of beautiful white Riojas—the 2009 and 2008 from “B de Basilio” that were two of my favorites with a
gorgeous palate of rich fruit, subtle minerals, great acidity and a slight nuttiness from the perfectly integrated oak.

I sampled these two whites before I was rewarded a second time for trudging through the rain with a taste of the Castrijo 1964 Gran Reserva Rioja—a red wine that, as Justin explained is no longer made and that many knowledgeable Riojans and collectors
don’t even know about because it was the first vintage of Bodega Cooperativa Vinicola Labastida—a cooperative in La Rioja Alavesa that no longer exists. 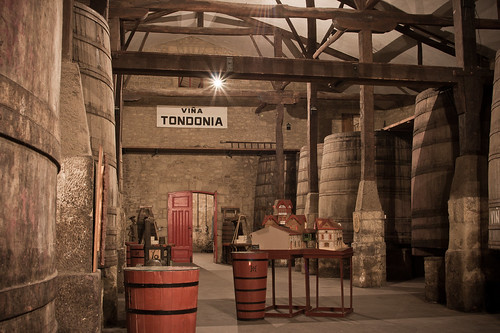 The wine had that quality I love in older Rioja—just enough fruit and acidity to keep the flavors and aromas alive with a nuanced dimension that can only be achieved by long bottle ageing. Like a strawberry scented, soft leather glove, this wine was smooth,
complex and had a long, intricate story to tell.

I’ve been lucky enough to taste older vintages of López de Heredia, La Rioja Alta, Viña Tondonia and others. The Castrijo fits right into this rarified group that are like taking a sip from a time capsule. They make me want to read a history book and calculate how old I was when the wines were being made or just beginning their decades-long beauty rest.

In the case of the 1964 Castrijo, Spain was still under Franco’s authoritarian rule, The Beatles made their American debut on The Ed Sullivan Show and I was blithely skipping off to kindergarten.

Much has been written about the 1964 Rioja vintage being one of the greatest of the 20th century but I think this video from Spanish Wine Exclusives illustrates what I’m talking about when I say these wines make me feel like I’m sipping from a fountain of history.

In the video, Don Manuel Ruiz Hernández, a noted authority on the technical aspects of winemaking in La Rioja talks about the 1964 vintage at great length as though these events had just happened a few weeks ago.

As I watched the video of Don Manuel discussing the various intricacies of the vintage, I noticed that he is standing in front of an ancient edifice. He later points out that it is a church—the walls of which are formed from the very same soils found in the vineyards.

But there is something else—a faint scribble of graffiti on the wall behind him and the unrehearsed soundtrack of birds chirping, church bells ringing, cars whizzing by and children playing that weaves together the natural with the technological, the past with the present and makes me hope that Justin and María will continue to discover more of these hidden caches of rare old wines, then share them with an appreciative buying audience and with struggling wine writers like myself.

(@sueguerra) writes the wine blog, “On The Vine” for New Jersey Monthly Magazine and is currently undertaking the Wine & Spirits Education Trust Diploma. In 1985, she backpacked alone across Europe and had some very memorable adventures on the Iberian Peninsula.