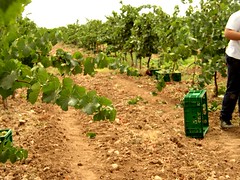 The OIV, a Paris based organization, recently published the State of Vitiviniculture World Report for 2005. For those of you who aren’t familiar with the OIV, they describe themselves on their site as:

Interesting facts and figures in this year’s report include:

The next two points I want to address go hand in hand, consumption of wine by country and volumes exported. It really comes down to the fact that if you can’t drink all the wine you produce, you better have someone to sell it to! So who’s drinking it?

Spain made about 35300mhl of wine in 2005, and according to this report, they’ll only drink 13900mhl, leaving us with 21400mhl unaccounted for! This is where the final figure comes in!

In the end, what does all this number crunching mean for Iberian wines? In short, Spanish wine is on the rise. Look for great values and new unexplored regions to come to the forefront as Spanish bodegas try to steal some market share in the coming years. Additionally, take notice as to how many vines Spain possesses, if you think for one moment that Spain can’t rise to number one in exportation, think again. Most of Spain’s vines produce grapes for brandy. If Spain wants to, they could produce wine from that juice, which would completely turn the tables placing Spain well ahead of France and Italy. Programs to pull out poor quality grape varietals in exchange for good quality varietals in better areas means that Spain is on the brink of altering the worldwide wine community perceives Spanish wine. Everyday I hear about a new winery or region that is starting to produce quality wines! For a country the size of Texas there is a ton of diversity here and lots of land capable of producing high quality wine.

If you don’t believe me, just remember things take time. Looking at all of the statistics before me, I’m confident that we are seeing a changing of the wine guard.