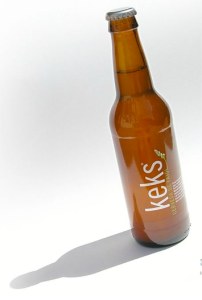 90% of the beer scene in Spain consist of cheap lagers. Nothing wrong with a cheap lager, but after a few, or sipping them for 6 years straight, you go numb from a lack of inspiration and flavor. If made in the traditional way, Lagers present simple flavors that are clean and leave your palate ready for more. Slakers of thirst and lubricators for all matter of late night foods, lagers clearly do one thing well, but sadly, that’s the extent of it.

Personally, I’m an Ale man. I like flavors. In addition to being a wine geek, I love to explore the ales that give many wines a run for their money. From hoppy American IPA‘s to super sour Guezes and Lambics, I love the complexity that only beer provides. Real ales are a pleasure and a joy; though I will put a nod in for other lagers. If you think a lager is a light simple beer, I dare you to pick up a Samiclaus. Admittedly, I don’t really enjoy Samiclaus until it has about 5 years of bottle age; before this, it’s just too intense.

So today, I sit with a random find from the small community of “micobrews” that are starting to pop up across Spain. Keks, a Rye. I am also assuming this is a lager, but I can’t tell for sure. Light hop aromas on the nose with a gentle spiciness on the palate which I believe is more a nod to the Rye than the light floral hops. Delicate and simple, this reminds me of some of  the real ales you might find in the UK.

I can’t say that this is a great beer, but it is indicative of many of the new microbrews appearing on Spanish shelves – more specifically, Catalunya -which all seem to be missing a component. Generally, good hops are being played with, and the blending is notable, but often these beers lose balance due to lack of malt. On the other end of the spectrum, there are some fun darker beers that seem to be overly spiced, or again, missing a sufficient amount of malt to support their complex flavors; whereby, leaving you with a watery mess of intriguing flavors that don’t have the body, and therefore, disappear from your palate sooner than one would hope.

That said, I’m glad there are more people playing with beer here in Spain. For all you wine geeks who think I’m crazy to put beer on the same level as wine, well, let’s sit down and taste together sometime. You’d be surprised by your ignorance 🙂 Stay tuned as I present a few more Spanish microbrews, and hopefully, we can watch the rise of quality ales in Spain.