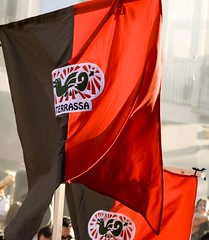 I saw a fire breathing dragon. I bet you weren’t expecting that were you? And it wasn’t a stuffed-dragon or a drawing of a dragon, oh no, I saw a true to life fire breathing dragon. Oh, you think I’m kidding, huh? You don’t belieeeve in fire breathing dragons. I bet your parents even told you that big fat drunken guy with cheap polyester suit wasn’t Santa Claus either! Well, here’s a little secret, anything is real in Catalunya if you allow yourself to get swept up in the moment, thwarting negativity and skepticism for as long as your spirit can dream. Remember Miguel Torres and his profound belief in exporting wines to the US during an era when it was considered impossible? Where is he now? Or another Catalan eccentric, Manuel Raventós, who began his international renown bodega with the dream of turning a dry and arid piece of land into a successful vineyard. Catalunya is filled with these stories; hence, a fire breathing dragon shouldn’t spark doubt, but rather ignite your imagination.

Last Friday night, Ryan and I ventured out for some good pizza with some decent house red from Somontano in celebration of Fest Major. Fest Mejor in Catalan translates to a Big Enormous Gigantic town Party. 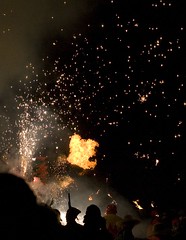 Now if your from the Midwest like I am, and you hear about a “big” town party, you might conjure up a small local band, a few kegs, some go-carts, scary clowns hired by the city to freak out your children and lots of grilled food. THAT is a typical Midwest party. But this won’t fly here in Terrassa as a festival. A town party not only expands over the course of four nights and three days, but it is an all inclusive event covering the majority of the city. Three to four parks are dedicated to children with carnival rides, bizarre Spanish pop music and a multitude of children. Other parks have a half a dozen stages dedicated to music, dance, magic and theater. Oh, and don’t forget the traditional Catalan dance called, Sardana. You will find hundreds of people standing in several circles dancing around and around and around like little hopping bunnies with ridiculously strong ankles to some of the most sleepy and repetitious music you’ve ever heard.

And although the festival sounds amazing and exciting, sans Sardana, it doesn’t even remotely hold light to our accidental encounter with the traditional Catalan event, El Raval Infernal. Imagine hundreds of people gathered under the moonlight in your town’s main square. In the outside circle, you see toddlers on the strong shoulder’s of their fathers with a bandanna tied tightly around their nose and mouth; grandmothers wrapped in a cloud of smoke as the occasional burst of flame would cast a brilliant orange light, revealing her awe and excitement; and us, packed tightly among the throngs of others in a desperate attempt to find oxygen. In the second tier, dozens of people clothed in what appeared to be peasant attire from the late nineteenth century danced around the circle to the rhythmic sound of the drumbeat. 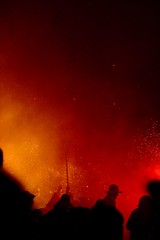 Below a floppy wide brimmed leather hat and above dirty worn bandannas I searched for their eyes, but it was impossible to see them. The soot and smoke was so think and caked onto their skin that my own eyes began to play tricks on me, instigating doubt as to how human they actually were. It was eery, made creepier by the giddy faces next to me.

Crack. Boom. Crack Crack! BOOOM! A dragon comes out into the center followed by a second smaller dragon. The center circle comes alive with sparks and explosions, as fireworks adhered to polls attached to the sides of the dragons are lit by the blow of a fire breather. Behind each dragon are more peasants who hold tight to pitchforks also filled with unlit fireworks, which when lit, spun around in frantic glory spraying the crown in a curtain of white light. Whoooosh! A spray of red and orange sparks spew from the mouth of the dragon and onto the heads of the people in the crowd. 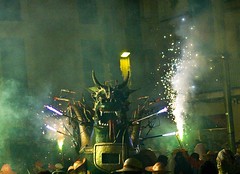 Ah, and now the donkey, the mascot of Catalunya, the rival to Spanish bull, proudly struts into the center of the circle and like a peacock thrusts his chest out sending sparks in every direction in an aggressive attempt to push both dragons back to the depths of hell.

Poetic, amazing, and breaks just about every possible law you can imagine in the States. Not only are we dying here of smoke inhalation, but fireworks are going off right in front of me. It’s so smoky that little Jaume and his seventy five year old grandfather are not only just as black as those dancing in the center of the circle, but in a desperate attempt to get both a better view and more oxygen, they balance themselves on metal makeshift guardrails that could easily crush everyone below them if tipped over. But here is the kicker, no one cares. It’s 12:30am, a butterfly sculpture walks into the center hosing the dragon and the crowd with water, while 8 month Maria is merely put into a tiny yellow slicker in anticipation of the night’s events.

I love this country! I love the fact that regardless of age, sex, race or nationality, citizens of Terrassa celebrate its glory with every natural element we have at our fingertips. The question of time is irrelevant. Temperature is passe. We celebrate with explosions and smiles despite, all questions of human safety to the curb. It sorta makes snickers on a stick and whirly rides sound a little lame.

By the time we got home, we were a little lost as to how we should toast the night. Do we read a book, play cards, look at each other in complete and utter amazement wondering what in god’s name we just saw?! Obviously, we chose to open a big beautiful bottle of Cava and reminisce over the night’s events. We figured that it would be sacreligious to not pop a bottle of Oriol Rossell Cava Brut from Bodegas Can Cassanyes in D.O Penedés in honor of all those crazy Catalans who have made our time here both incredible and fantastic. Pale straw with slight green hues. On the nose a nice rich bready aroma with notes of white flowers and almonds. Great body, fun bright mouthfeel with good acidity. And for 7 Euros, it was absolutely worth it!

In short, cheers to Catalunya, hoping that your future will be complete with fire-breathing dragons, the chance to suspend doubt and great cava!