Cider (Sidra) production in Spain is concentrated in Asturias and Guipúzcoa, two mountainous regions in the northern coast of the Iberian Peninsula. Both regions produce a similar style traditional cider: dry, still, and cloudy with sediment. Asturian cider is called Sidra, while the Basque name for the fermented apple nectar is Sagardoa. The Principado de Asturias is responsible for 80% of Spain’s cider production. Reaching up to 54 liters a year per person, they drink more cider per capita in this small province than anywhere else in the world. In Asturias, Sidra Natural (hard cider) is more than a drink: it’s a symbol of regional id. (photo by: obis) 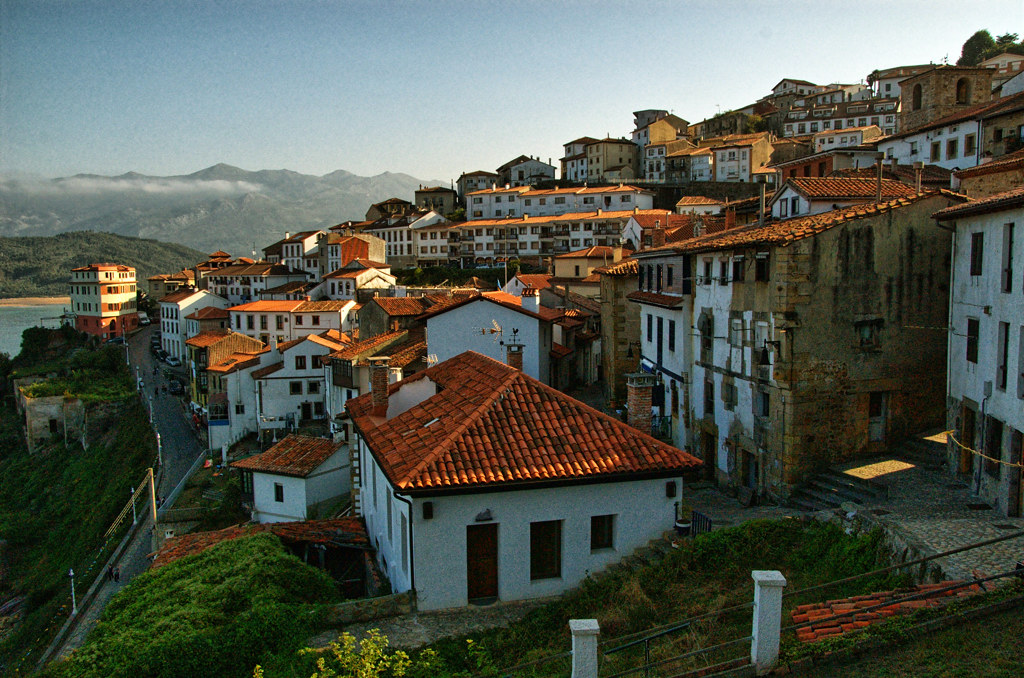 Celts vs. Roman / Cider vs. Wine

Spain’s north Atlantic coastal province of Asturias is a place of deeply rooted traditions where all things take on a distinctive regional flair. Asturias is an integral part of the green and mountainous Spain, where the imposing Picos de Europa run parallel to the sea forming a barrier between the arid Central Plateau and the northern alpine valleys of the Iberian Peninsula. Its isolation from other parts of the country throughout history has allowed Asturias’ unique culture to preserve Celtic, Roman and Christian components.

The region’s history is kicked off in the sixth century BC by the Celts. The Astures fiercely resisted the power of Rome until the first century AD, when the Romans began to win territory in the region. By the fourth century AD, the fertile lands south of the Picos de Europa (in present-day León) and east of the Sella River (in present-day Santander) were assimilated. The Romans preferred these fertile lands over the wet, rugged peaks of the Asturian Highlands, inhabited by indomitable Celts. While Roman culture, language, and religion (Christianity) were adopted by the lowland population, the peoples of the mountain villages high in the Picos de Europa were harder to assimilate and remained Celtic in culture.

These Celtic peoples of Asturias drank fermented apple cider as is recorded by early Roman settlers, who always preferred growing grapes and making wine. Despite the notion that the making of apple cider in Spain began earlier than in any other modern cider producing nation, production was only maintained in soils that were too moist and lacked the sun exposure to afford the luxury of vineyards; only in remote and rainy areas like Asturias the tradition has been maintained to this day. (photo by: javierAlamo)

The Three Style of Asturian Cider

Asturian Cider production took off in the early 1900s, transforming a sector comprised mainly of small artisan llagares (cideries) into an industry with large regional production facilities. The region’s cider gained DOP status in the 1990s. Today, Asturianos market three main types of cider made with one or a combination of the 22 native varieties of apples approved by the Consejo Regulador de la Sidra Asturiana out of the more than 200 that exist in the region:

Sidra Natural: Traditional style dry hard cider fermented with indigenous yeasts (found in the apples, the orchards, and the ciderhouse) and bottled without filtration. Its low alcohol content (5-8% Alc. by Vol.) earthiness and funky rusticity are its more appealing characteristics.

Sidra Achampanada: Produced through a second fermentation (carried out in the bottle or in a tank) that raises the alcohol content and obtains higher effervescence. Dry and sparkling, close to French-style cider, it’s represented by brands like “El Gaitero” and is the more popular choice in Spain.

Sidra de Nueva Expresión: This cider has been filtered and stabilized to remove the sediment. More refined and modern, the style is closer to wine and is deemed by producers more commercially viable, especially in export markets.

It’s a matter of individual taste, yet I’d start discovering Spanish cider through the more artisan Sidra Natural first. Not only does it have a unique intensity and complexity of flavors that can’t be remotely reproduced by French or English styles, its rituals of pouring and consumption are also a very important part of the experience. (photo by: ski4fd)

The proper way to enjoy a Sidra is in a typical Asturian cider bar, the Chigre. Here, the bartender will offer a glass (un culín) poured in the customary fashion or escanciada (from the verb escanciar). This process entails pouring the cider with the arm holding the bottle extended overhead, allowing the flow to plunge into the glass, which is held at waist level (see video below). When a novice attempts this pour, more cider ends up on the floor and all over their shoes than in the glass… Yet don’t be afraid to get your feet wet, as this is more than mere ostentation. The technique allows aeration and is done both to get bubbles in the drink (poured normally it ends up flat) and to release its full flavor. Drinking Sidra is a very social event, bottles are shared and everyone drinks from the same glass. The cider is poured and passed around quickly, being customary to leave the last drop of every glass –which may contain dregs- and spill it on the sawdust-covered floor of the chigre as a way of “cleaning” it for the next person.

Sidra is an intrinsic ingredient in Asturian gastronomy. It’s mainly used as a marinade or pickling brine for fowl (quail, squab), blue fish (mackerel) or even spicy pork sausage (Chorizo a la Sidra). When pairing, Sidra Natural is a very versatile drink. Thanks to its crisp freshness and astringency, it can clean and cool our palate when combined with spicy and smoked dishes. Its typical pairings involve regional specialties like Fabada as well as some of the pungent Spanish blue cheeses that can be found in the Picos de Europa like Cabrales or La Peral

Want an experience tailored to your needs? Get in touch now do discover Spain’s cider country!