Spanish Wines from the Balearic Islands 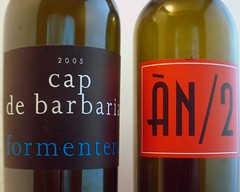 Last night, a friend of ours came in from Madrid to enjoy a weekend away in Barcelona. While Ryan prepared a fabulous dinner of creamy cauliflower soup, roasted pork and a bitter greens salad, my friend and I made a quick jaunt down to Vila Viniteca in Barcelona to purchase two Balearic wines to accompany our meal.

Albeit a small and relatively unknown wine region in Spain, for whatever reason, the Islands have called my attention for quite some time. Not only am I relatively ignorant as to the general geography and gastronomy of the Islands themselves, but I am even less savvy as to the wines they produce. Being that the Islands produce so little wine as compared to the bigger regions such as Rioja or Somontano, I typically never bother going out of my way to get a Balearic wine. Yesterday, however, my friend and I made a pact to each choose a wine from the region with caveat that mine had to be available for purchase in the States.

Allow me to offer a little background on the Balearic Islands. There are two D.O.s within the Islands, D.O. Binissalem Mallorca and D.O. PlÃƒÂ  i Llevant. Mallorca has well over 27,000 hectares of vineyards and exports over 300,000 hectolitres of wine a year. Llevant was first classified as a Vinos de la Tierra zone of approximately 1,000 hectares in 1991, now over a quarter of the area has been reclassified as part of D.O. PlÃƒÂ  i Llevant. The native black grapes include Manto Negro, Callet and Fogoneu, while newly planted varieties include Tempranillo, Monastrell, Cabernet Sauvignon, Merlot and Syrah. Native white varietals include Moll and Prensal Blanc with additional experimental plantings of Macabeo, Parellada, Moscatel, Chardonney and Gargollasa.

The wine I chose was the 2004 An/2 from Bodegas Ãƒ€nima Negra. Ãƒ€nima Negra, or Black Spirit, was founded in 1994 by three Majorcan friends, Francesc Grimalt, Pere Obrador and Miguel CerdÃƒÂ  Angel who all wanted to revive the native grapes of the region while others were fighting for trend-setting varietals like Cabernet Sauvignon. By gathering their resources as a team, they were each were able to contribute to the creation of this Bodega: Francesc took on the role of the grand wine maker; Pere brought his native vines; and Miguel offered his business background. Currently, Ãƒ€nima Negra produces three VT wines from the Balearic Islands: Son Negre, Ãƒ€nima Negra and Ãƒ€N/2; in addition to one white wine called Quíbia.

The second wine is from the island of Formentera which is the smallest inhabited island in the Balearic archipelago. Nowadays, Formentera’s wild vegetation is characterized by the dominance of pine and thuriferous juniper woods accompanied by a dry bush microclimates. In short, we’re talking a hot, dry and arid climate with chalky soils that provide the perfect conditions for growing grapes.

Bodegas Cap de Barbaria is a red wine blended with two native varietals of the island, Monastrell and Fogoneu, in additional to two old-school varieties, Cabernet Sauvignon and Merlot. The land is broken up into two distinct areas, one hectare opposite the hotel where 60% Cabernet Sauvignon and 40% Merlot were grafted in 1999 to 140 American stocks, and a half-hectare with 40 to 50 year-old Monastrell and Fogoneu vines. The grapes are all hand picked and given special treatment after fermentation has completed – the wine remains in contact with the skins for approximately 30 days while the wine is continually pumped over the must in order to create additional flavor and structure. The result is an extremely fruit forward wine with great body and structure.

The one unique and fascinating note about this wine that I would pay special attention to is that this is still a VT wine, or Vino de Tierra; which means that it is not yet classified as part of the DO. Yet, regardless of its “lesser” status as a non-D.O. wine, it has received some impressive reviews from both Guia de Penin and the renown Spanish wine magazine, Sibartus.