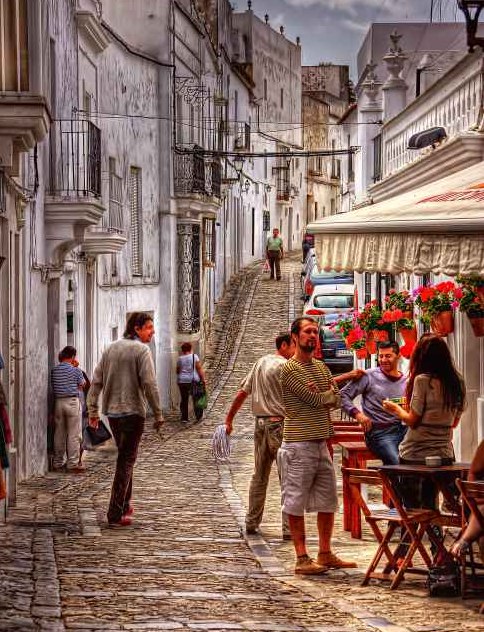 Pete Wolstencroft’s Tapas and Tintos was electronically thrown on my desk from Catavino suggesting that it had my name on it. Maybe it did, and maybe it didn’t, but there it was, and I settled in with a set of expectations led by the title. Well, it is not a book on Spanish food and wine. The longer I searched down that alley the less satisfied I was. What I did find was two books under one cover title; one of which I think has a future.

The author takes us back to his UK roots to an occasion of decision making. His self described sour career of bad luck introduces a man of wit that makes for a delightful traveling companion. He demonstrates the point that perhaps the two most silly words in the English language are “career path” as the serendipity of his life takes hold and its winds blow him to the Englishman’s adopted South Coast inconveniently owned by Spain and occupied by the Spanish. He is smitten by both as fortune places him on one of the most recognizable settings in the world for the next four years of his life; Gibraltar. Besides its ever recognizable silhouette, Gibraltar may be famous for one of the most entertaining airport landing strips in the world. The ominously named Winston Churchill Avenue is the principal roadway that carries cars, trucks and people from the Rock to the Spanish Border. Slight problem. The road intersects the airport runway. In a spirit of compromise, WC Avenue is closed to traffic for all airline landing and departures.

For most visitors, Gibraltar is one those day trip spots filled with novelties in terms of products and experiences to send people off with bragging rights for having visited. It usually includes the cable car to the top of the Rock, and tour through the tunnels in the rock and a gawk at the monkeys returning the same to you as they cling to the rock. It is a tourist’s world. It is reminiscent of the old saw regarding the difference between a traveler and a tourist: a traveler never knows where they are going and a tourist never knows where they have been. Wolstencroft is decidedly a traveler. He takes up residence and finds himself working a variety of jobs both around and inside that famous rock.

By his own admission, he is more worth his keep as a writer than as a laborer but that doesn’t prevent him from staying employed. The ups the downs of work life, love life and social world takes us into a seldom seen world of of the non tourist nooks and crannies on the coastline from Cadiz to Malaga. I love ex-pat stories. Like snowflakes, they are all somewhat the same but they are all quite different. And like snow, if you hold little interest you can be indifferent. Fair enough. But I am a junkie for this kind of memoir. At times he reminds me of Stephen Clarke’s witty and warm sojourn in Parisian life in his 2006 book A Year in the Merde.

Not being a Brit, I can only imagine that the mention of Clarke’s name is as welcome to an English male writer as the dreaded words Bridget Jones is to writers of the female British persuasion. Trust me, it is invoked with the utter respect for both of you. The obstacle course of the ex-pat makes up his early experience as he introduces the reader to life on the rock and the real world of feeder communities along the coastal communities that hug the Mediterranean and Atlantic.

The book chugs along and holds my interest through tapas and meals though with none of the loving food description that leave me with dreams of meals I never really had but only read about. Voyeurism is the only way for the food obsessed to have more meals than is normally allotted in life, and thus, lives the burgeoning food writing industry. When the author returns via Lisbon to homeland Britain I begin a struggle to feel I am involved in a narrative. It all ended for me when we left the La Linea in the South of Spain. A new book may have begun. One that features an ESL teacher but it never caught me. I have read several English as a Second Language teacher memoirs. All of them were written from Japan. It is not a genre that draws me in. I am a food and wine guy and I love the struggles of ex-pats in a foreign World. It may be a realm like that of Rosecrans Baldwin’s, Paris, I Love You But You’re Bringing Me Down. A young writer with no copy writing experience and no French language in hand finds himself moved to Paris to work in a barely bi-lingual ad agency. One year produced one delightful book.

The end of Tapas and Tintos leaves me with just an uncatalogued list of experiences and no controlling narrative. I want to care but I don’t. I do, however, stay involved through the first eighty some pages and would like to enjoy more of these people and their places. I think the structural elements for a book lies in these pages. And now they are ready to be fleshed out with more detail, personality, and the witty humor that the author is capable of producing.

Burt Frink
Buy a copy of “Tapas and Tinto”

Burt Frink lives on a high floor of the tallest building in a leafy American suburb with a seldom played baby grand piano, an often petted, walked and fussed over tiny dog and fourteen hundred cookbooks which he cooks from daily. These books would be considered an obsessive personal weakness if he didnÔÇÖt justify his behavior by cooking. Asked why he collects books on food and wine he says God told him to. Pressed further on that event he says that her voice (God that is) sounds somewhat like Sharon Stone, Lauren Bacall and Joan Greenwood melded together. She sounds nothing like Tina Fey. He has collected for forty years. Some consider him opinionated.