Tapas Fantasticas: A Slice of Spain in London 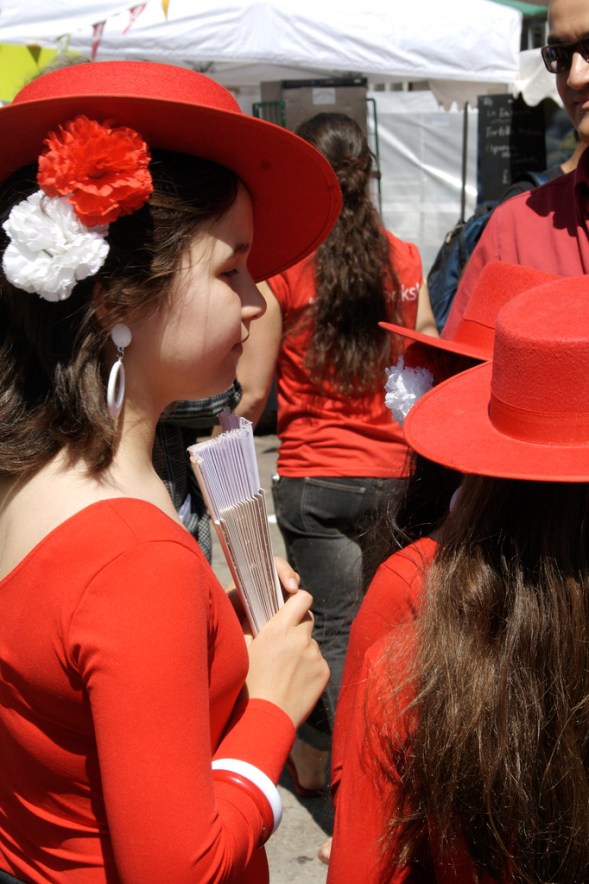 A little piece of Spain came to London the other day and settled down on the banks of the Thames by Tower Bridge. They could not have picked a more Spanish-like weekend, the sun shone relentlessly and added to the joyous mood.

It was so well done, like being in a real Spanish fiesta and it was lovely to stroll around in the sunshine taking in the sights and sounds of the wine and food stalls around me – with iconic views of London in the background. We were ringed by famous landmarks and everywhere I looked there was something to see; Tower Bridge, the Tower of London, HMS Belfast, the Greater London Authority building and of course the Thames itself with its busy river traffic. (Flickr photo by RobWinton)

Tapas Fantasticas‘ aim was to bring a a slice of Spanish life to Londoners in the form of tapas, and to pair the food with wines from Spain?s most famous region – Rioja. Many of the Rioja most prestigious wine producers were there in force, as well as some of the up and coming bodegas.

It was all about the atmosphere really, which was fantasticas!

Visitors could buy a glass that came with tokens entitling them to free tastes of wine. They could also buy more tastes, for 50 pence, as well as whole glassfuls of the wines on show and full bottles to take home with them. 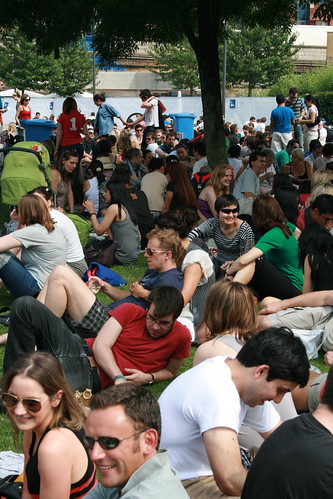 There were others, of course, but I had to pace myself. It was a sweltering day, the sort of weather that fills your childhood memories, and at first I went in search of refreshing white wines. There some excellent examples that I enjoyed immensely, both oaked and unoaked. CVNE’s unoaked Monopole brought back happy memories of Spain, while Dinastia Vivanco’s unoaked, but intensely aromatic Viura-Malvasia was a delight – and it is always good to renew acquaintance with Marques de Murrieta’s Capellania Blanco Reserva. There was also a lovely array of new wave gently oaky barrel fermented white wines.

Also available was a small array of excellent rosados, most memorable amongst those was CVNES’s and Taron, which was a new winery for me.

It was really nice to see so many chilled reds available, we needed them in that heat. It just took the edge off and some of the wines were actually improved by it. It made them fresher and lighter to drink, less soupy and less hangover inducing too. It was also interesting that most of the visitors seemed to embrace the concept of chilling red wines, which is quite alien to Britain.

All that wine, of course, needed some food to soak it up – and we got it. Some of the very best Spanish restaurants and tapas bars in London had set up shop here and were offering mouthwatering delights, amongst them:

Barcelona Tapas Bar y Restaurant – this small chain is one of my favourites and they were cooking up some superb paella and their trademark individual tortilla Espanola.

El Faro – a new tapas bar to me, but one I shall be visiting quite soon, prepared some fabulous patatas bravas and ensalada Russe.

5J – Iberico Ham House – a wafer-thin slice, of heaven, simply the greatest ham I have ever eaten – 5J Cinco Jotas Pura Raza – it just dissolved on my tongue with an amazing depth of flavour – you must try it!

Camino Restaurant and Bar, Iberica and Pinchito Tapas were also there, but the queues were just too long to enable me to get to everyone – next year perhaps?

Rather excitingly two great tapas bars also came over from Logrono in Rioja to set up temporary London branches:

After all that, Churros Garcia had the perfect end to all that food and wine, succulent calorie free churros to dip in rich low-fat chocolate caliente – I lied about the calorie free and the low-fat by the way, but as long as no one saw me eat them, they don’t count.

Tapas Fantasticas provided a splendid way to while away an afternoon on a blissfully sunny day in London, while tasting delicious Spanish food and an excellent line up of Rioja wines. I cannot wait for next year…