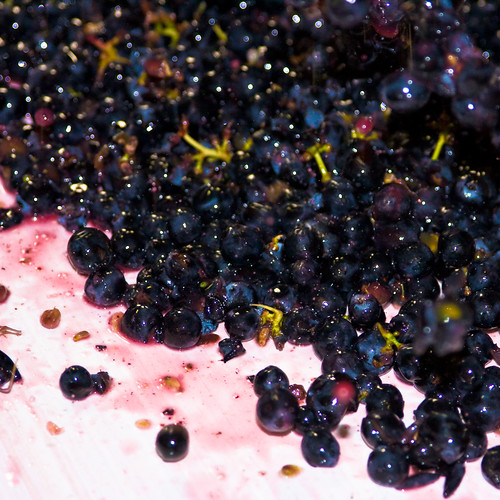 Editor’s Note: Here is the next article in a series from my lovely wife Gabriella. This one focuses on her experiences learning about the wines that come from the grape Tempranillo. Currently she is gone for a month leading a bike tour, but when she returns expect more articles as she continues to figure out the world of Spanish wines.

The advice given by non-foodies after casually commenting on the fact that you’re moving to another country is sort of like being told where the best food is in New York City by an individual who have spent their entire life in the Appellation Mountains. Most people believe that wine in Spain consists of Sangria and well, Sangria. Anything past Sangria is both non-interesting, and due to poor marketing, not well-known in the central states. Once Sangria is firmly established as the “wine of Spain”, the conversation normally flows over the border to France, where people are thrilled to share their “infinite” and “accurate” knowledge about the quality and diversity of French wine. “Well honey,” they say with that oh-so-knowledgeable smile, “the French have just fabulous wine over there. Those French are just so fastidious about their winemaking.” I agree, the French do make great wine, but so do the Spanish; and unfortunately, Americans like myself, thrive on advertising. Without a good solid marketing campaign, we usually won’t step outside of the social trends.

Allow me to give you an example. Before leaped across the great pond, I was a waitress for a decade in several four and five star restaurants. I would be lying if I told you that the staff actually had a clue about wine, but we convened together monthly for our formal wine and menu tasting. It was an absolute nightmare because none of us fully grasped how Spanish wine compared to French, Italian or Californian wine. To be honest, we were salesmen – trained in the art of persuasion and marketing, not gourmands. Between the tasting notes given to us by the distributors, solely covering the Rioja region, and the flashy articles written in Gourmet and Wine Magazine, we were primarily actors capable of improving a witty and smart one-liners on the earthy spicy flavor of a 2004 Solaz or the dark bloody rich color of a 2003 Sangre del Toro. If it weren’t for my husband’s contagious passion to explore and savor new regional wines, I might have honestly believed that Spain contained nothing more than Rioja wines.

Staring at the dark orange muddy buildings heating up in the afternoon sun from my office chair, I am a little stunned by how ignorant I still am. I have lived in Spain for eight months and although I came a bit more prepared than the average ex-pat, I feel as if we have only scratched the surface of Spanish wine. The complexity of wine in Spain is vast and usually underestimated. Fully comprehending the various grape varietals, DOs and styles of winemaking is a daunting task and one that I hope to master before I turn 80, forgetting both my accumulated wine knowledge and the last place I saw put my dentures. However, in the meantime, I decided to jump the gun and do a little research about what made the Rioja region so internationally appealing to American wine distributors – the secret ingredient being, Tempranillo.

The Tempranillo grape was named after the Spanish word temprano meaning “early” as a result of its prompt ripening as compared to other varietals. Physically, it is a medium to large, thick-skinned, black grape that has been described as more cylindrical in shape, hanging in slightly longer bunches. The vine is hearty and upright, forming large dark green leaves that are able to utilize every ray of the scorching Spanish sun. The most interesting bit of trivia to me is how amazingly durable this grape is. Think about it. Try and remember the last time you were in the middle of a lake, or basking by a pool. How hot was it? Were there times when nothing else entered your mind than a large clear beautiful glass of water, or dunk in the cool refreshing water? You may have that liberty, but here in Spain where water can be a scarcity, the Tempranillo grape needs to take on camel-like qualities, sucking in any amount of moisture it can find. The result is a wine with a concentration similar to the population of Tokyo – active, intense and ever-evolving.

Where do we find Tempranillo? Historically, it originated in Northern Spain and introduced to other countries in the last half of the twentieth century. Most notably, Tempranillo can be found in La Rioja, Navarra, Somontano (in the Pyrenees) and the Levante (south eastern Murcia and Valencia) where it becomes the backbone for Rioja wines. Occasionally blended with Garnacha, Mazuelo, Graciano and more recently, Cabernet Sauvignon and Merlot, then fermented in American and French oak, it blossoms into a fantastic bottle of wine.

Interestingly, the Tempranillo grape is so often used as a blending ingredient, and consequently, adopting an alias name. It calls itself “Cencibel” in La Mancha and Valdepeñas (south of Madrid); “Ull de Llebre” (eye of the hare) in Catalonia; “Tinta de PaiÂ­s” or “Tinto Fino” in Ribera del Duero; “Tinta de Toro” in Toro; and Tinto de Madrid in Madrid. Outside Spain, it is called either “Tinta Roriz” and “Aragonez” in the Alentejo region east of Lisbon where it was historically used in port blends, but now has shown incredibly popularity as a table wine. You can also find additional plantings in Argentina, Mexico, California and Australia.

In short, Tempranillo is a remarkable grape that is both durable and delicious. It is no wonder that the Spanish take incredible pride in this vine, usually making it the star player on any Carta de Vino (Wine Menu).