Tempranillo – A tapas bar in Madrid 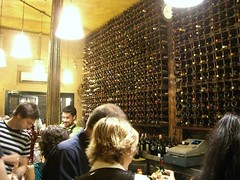 Editor’s Note: Janelle Norman from Tapas Talk, graces our presence again with her recommendation of a popular wine bar right in the heart of Madrid.

Nestled in the maze of streets within the neighborhood of La Latina is your destination for delicious Tapas, good wine and great atmosphere, the street of Cava Baja. Since the 16th century, this street, which had been the moat outside the medieval city walls, has been a place to meet friends and taste food, both local and from the outer reaches of Spain. During Madrid’s first boom of growth, thanks to Philip II’s establishing Madrid as capital in 1561, the city saw its population triple in a short amount of time. Cava Baja became a street lined with restaurants and posadas, or inns. It is said that this was a popular meeting point for newcomers who wanted to hear the news and gossip from their home towns. Today the street is home to some popular castizos, typical madrileño, restaurants such as the (more expensive) Posada de la Villa and Casa Lucio and is also home to Galician, Navarran and Basque oriented establishments.

However, we are going to explore a taberna called Tempranillo. Appropriately named after Spain’s famous noble grape variety, Tempranillo, this bar is focused exclusively on wine. They serve over a hundred different wines, and as their wine list written in chalk on the wall proudly states, solo vinos españoles, only Spanish wines. It’s the perfect stop if you would like to experience a wide variety of indigenous Spanish grape varietals and Spanish wine regions other than Rioja and Ribera del Duero, which can be found just about anywhere. At Tempranillo, you can explore wines from Madrid, Toro, Priorat, Bierzo, La Mancha, Rueda, Jumilla and Somontano, to name a few. And to bolster their wine reputation even further, I discovered one my favorite sweet wines at this very bar, a late harvest Sauvignon Dulce from Palacio de Bornos in Rueda, Spain. Beyond the memorable and quite festive pink cork, the 2005 vintage has been one of my favorite wines, as I feel like I am eating a fruit compote ice cream with just hint of lemon and lime zest each and every time I taste it. To Tempranillo’s credit, I have been absolutely addicted to this smooth and fresh fruit bomb from the moment it touched my lips. Although, during one of my many visits to this bar, I tried the 2006 vintage and was a little shocked by the difference. I wasn’t nearly as impressed as I was by the 2005, finding to be rather hollow and lacking its predecessor’s bold fruit flavors, but I don’t give up easily, having high hopes for the 2007 vintage! 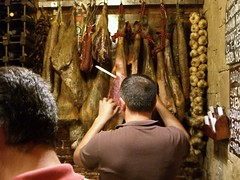 As for food, its obvious from the photo that I suggest the traditional Iberian ham, jamon iberico, believed to be the ideal pairing for any Spanish wine. Their sausages and cecina, cured beef sliced paper thin, are equally delicious. And like many bars in Spain, Tempranillo carries a wide variety of tostas, or toasted bread, topped with a both traditional and non-traditional toppings such as cured cheese, grilled shrimp or sauteed mushrooms. Personally, I’d encourage you to order the mushroom and egg house special or the duck foie. If you stay for dessert, may I suggest a sweet Moscatel to perfectly compliment your order!

Tempranillo is located at Cava Baja, 38. See my Tapas Talk map for location along with other great bars in the area.

Thanks Janelle for your recommendation! Having been there a few times myself, I can attest to being a little awe stricken the first time I saw their floor to seeing wine rack spanning the entire length of the bar. As most bars in Madrid typically will carry only a small handful of wines, this particular display was both invigorating and daunting.

Although slightly smaller in both height and width, I might also suggest taking a peak at Lenndevour’s Flickr account devoted to examples of personal wine racks.