The Alchemy of Crafting Spanish Wine for Sushi 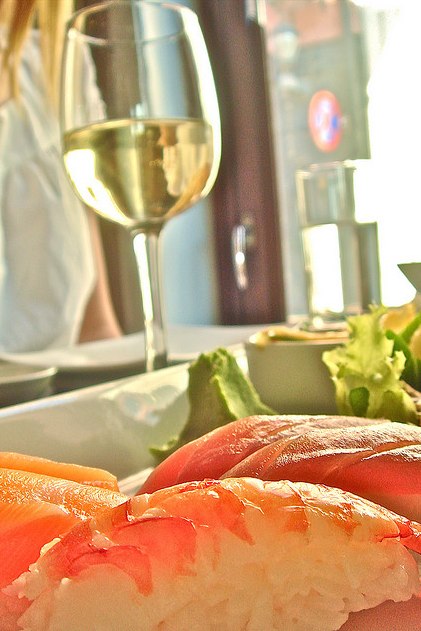 Massive wine corporations and cynical marketing strategems don’t get great press these days but perhaps we should spare a thought for Grupo Freixenet and their Oroya Sushi wine. Freixenet and Sushi wine, I hear you cry, whatever next? But I’ve got quite a bit of time for it – in fact I might say I even admire the entire concept.

For starters, I like the marketing. Sure, I don’t praise Bordeaux’s Chateau Lafite for putting a dinky little Chinese symbol on their 2008 – that’s just pathetic – but I might suggest that wine companies (not necessarily multinational giants) look into Malvasia Negra for Mexican food, Prieto Picudo for Paella or Banger and Mash Bonarda. The beauty of Oroya is that, like a Michelin-starred chef with a poor cut of meat, Freixenet have taken a bunch of plentiful and (dare I say) relatively bland grape varieties and used their, ahem, ‘subtlety’, to their advantage. Sushi is generally delicate, and what better than a well-crafted, subtle, fresh and slightly aromatic wine to go with it?

All they’ve done is take the most plentiful, cheap and unimpressive grape in Spain (Airen), mixed it with something with a little more flesh but still subtle (Macabeo, or Viura) and sprinkled some garnish on top for aroma (Moscatel). It’s also from Spain’s most uninteresting region: Castilla – La Mancha.

Remember the pork belly of old? A few good chefs got hold of pretty underrated cut, jazzed it up, and it was all the rage (even if it’s a little passé these days). So while I should probably chide Freixenet with the whole ‘perils of globalisation’ and the ‘cynicism of marketing’ spiel, I think I should do the contrary. Spain has more than enough grapes (boring, underrated, undiscovered, etc.) to go around and that anyone can take such tarnished or unloved objects and use their ‘faults’ to their advantage should be praised.

Luddite that I am, I would rather that the rediscovery of such grapes and regions come from the work of a handful of people passionate about their wine (the example of Godello and Vina Godeval in Valdeorras springs to mind for starters), but mighty oaks from little acorns grow and should I be despondent that the arm that sowed the acorn belonged to a giant? Not in this case.

I’ve tasted this wine before and remembered the aromas being a little more fresh than this. The nose was a bit dead – it smelled like a standard, boring, white wine – but I’d been hanging onto the bottle for over a year so I’d advise that this wine be drunk almost as soon as it is bought (although with non-vintage wines, it’s difficult to know how long they have been on the shelf). The palate, though is still delicate and impressive in its way. It’s well constructed and would probably go well with most delicate fish dishes, not just the Sushi for which it is destined.