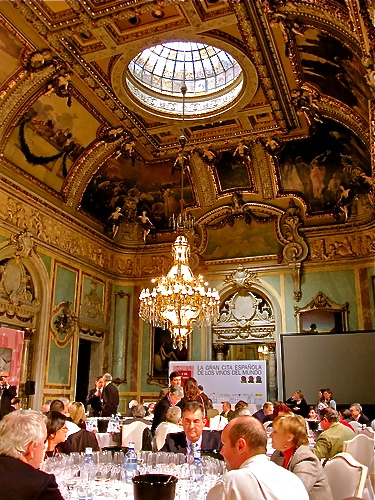 Gabriella and I were recently asked to help judge at the UEC’s (Spanish wine tasting union) bi-annual Bacchus awards. Held in Madrid at the posh and very right leaning social club “The Casino”, whose membership is no longer open to anyone other than the offspring of current members, the judging took place in a room that could host court for any royal wedding, coronation or banquet ball. The event is a bit over the top.

The tasting itself is held double blind, meaning we know nothing of the wines region, producer, or country of origin and only grouped into “styles” something that is at times very loosely defined (semi sweet sparkling), I dove into the first 40 wines.

The first day was exhausting, which I know is a term that those not in the wine world laugh at when told that I had to taste all these wines, but the truth is, is that tasting like this can wipe you out. Each sip you find yourself straining to differentiate the current offering in your mouth from the countless others you previously imbibed. Also, because I’m not a wine contest believer, it felt like I was cheating myself when I occasionally made snap judgments that I knew effect the possible sales of the wine. Each wine is opened, poured, judged, within the span of 10 minutes or so, leaving my mouth raw from tight tannins and my nose numb from powerful fruit bombs.

This year, 1,624 wines entered from 21 countries. And of those 1,624 only a max of 30% will win awards. Consequently, many regions that would normally avoid entering a wine competition, for reasons of cost or otherwise, find themselves stuffing the ballot box. Slovenian wines, Brazilian wines, Estonian wines, Greek wines, etc. all hoped to grab a little slice of fame, while bringing light to their yet undiscovered corner of the wine world. The break down of wines entered were: 336 white, 93 rosé, 1017 red, 107 sparkling, 48 fortified, 14 late harvest, and 9 dried grape wines. As you can see, this is hardly a full snapshot of the wines produced internationally. And for this reason, I want to quote a fellow judge who when asked if the wines selected as “tops” were really the best, his answer was, “They are the best wines submitted to the contest”, a lofty but fair critique, and there in lies the rub.

First off, the wines submitted that did not win an award will never be known beyond the winery who submitted them and the sommelier who dutifully poured them to us. So there is no way to know what wines showed poorly. Second, of the wines that won, more than one wine, I believe, achieved its award ahead of someone else’s who is more deserving. Here are our reasons why this occurred: 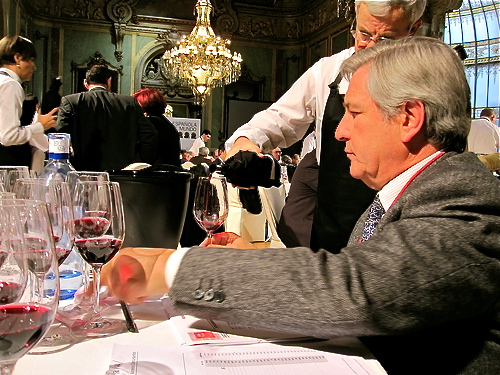 Generally, the wines that won were all good wines. The greater issue is that the rare treasures may have slipped through the cracks because of their uniqueness. Sales will increase for the wines that won, but we hope that you the reader look past these “easy sales” and continue to seek out the wines without a medal or shiny ribbon. These are the wines that may have been more difficult to understand, or the ones not entered by a wine maker who felt his wines did not need scores or ribbons to sell!

Awards and competitions are a tool for the lazy salesman, and the non-inquisitive wine drinker. They are ready made “drink me” stickers to make your purchasing a bit easier. While sometimes these wines are indeed wonderful wines that deserve recognition, more often than not, they are no better than their sticker-less shelf companions. Go explore…