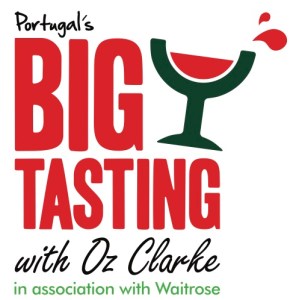 As you all know, Catavino is rather smitten with Portuguese wines. We tend gush endlessly about their diversity, quality and personality, with the occasional quip on how difficult it is to get your hands on them internationally. That said, over the past few years, we have been collaborating on several projects with Viniportugal in an effort to increase the international exposure of Portuguese wine. And there is no better opportunity to help spread the good word than an online tasting with one of the world’s leading wine experts, Oz Clarke.

Tonight at 7pm GMT, Oz with the help ofÂ  our friend Charles Metcalfe, will be tasting 6 Portuguese wines LIVE online from the Lord Cricket’s Ground; the tasting will also be broadcasted around the world, and gatherings will be held at both the John Lewis Foodhall on Oxford Street and at Waitrose in Canary Wharf. So even if you don’t have the wines in hand, or have the opportunity to purchase them through Waitrose, you can easily follow along at The Big Tasting website where a live video will be streaming. You can also follow along at our Twitter account @VPwine, our Facebook event page, as well as the hashtag #TBT2010

Wines for The Big Tasting

In an effort to cover the vast stretch of terroir in Portugal, 6 wines (1 white and 4 reds) from 5 completely different regions were chosen for the tasting. The regions of the Algarve, Alentejo, Tejo, Douro and Vinho Verde stretch from the the most southern tip of Portugal to the most northern, allowing for ample variation and expression between each wines.

Tinto da Ã‚nfora – Alentejo
When we think of the Alentejo, we tend to think of cork forests, vast stretches of undulating hills blanketed in wild flowers, and of course, pigs! These little black footed guys are famous for Portuguese cured ham, presunto. However, the Alentejo is also famous for their intense and aromatic wines. Tinto da Anfora by BacalhÃ´a Vinhos is a blend of 6 grape varieties, and is an excellent medium-bodied red. Check out an interview with Vasco Penha Garcia, the wine maker for Tinto de Anfora.

Arco de Esporão – Alentejo
Like the Tinto da Ã‚nfora 2006, Arco de Esporão is from the Alentejo region, where the villages are rural with majestic sunsets. Evora and Monsaraz are medieval forested towns with world heritage status. The Arco de Esporão is a new multi-varietal blend made specially for Waitrose by top Portuguese winemaker David Baverstock. Made with the indigenous grape varieties: Aragónez, Trincadeira, Castelão, Syrah, Touriga Nacional and Alicante Bouschet, it’s a stunning wine. Check out the interview with David Baverstock here.

Tagus Creek Cabernet Sauvignon/Aragonez – Tejo
The Tagus Creek vineyard is located in a very unique wine region called, the Tejo. The landscape is dominated mainly by thick and majestic cork trees and expansive vineyards, which are protect by the Atlantic Ocean climate by small regal mountains. The Tejo originally gained its reputation for producing large quantities of wine that would supply restaurants and taverns in Lisbon. However, in the last 15 years, the region underwent massive changes in the vineyards, in the wineries and not surprisingly, in winemaking with more young blood pumping through the region. Many vines were transferred from the fields near the sea to the ones in the interior. This lowered production, but increased quality.

Quinta de la Rosa Reserva – Douro
The Quinta de la Rosa vineyard is located in beautiful terraced vineyards carved by the winding Douro River. The region itself contains primarily schist soils and is surrounded by the Marão and Montemuro mountain ranges. Consequently, despite the 250,000 hectares in the Douro, only 40,000 of it has been dedicated to culturing vines. Working the vines is primarily done by hand as the combination of slippery and sharp soils in conjunction with incredibly steep terrain makes vine growing in the area more of an extreme sport than a romantic vocation. The winery is run by the father and daughter team, Tim and Sophia Bergquist, along with the support of Sophia’s brother, Phillip. The winery was originally given to Sophia’s grandmother as a christening present over 100 years ago.

Quinta de Azevedo – Vinho Verde
This lush, green wine region, which gives Vinho Verde its name, is located in the northwest of Portugal and has a strong Atlantic influence which results in a temperature climate of not very cold, but rather rainy winters, and relatively dry and cool summers. This 12th century winery is housed between the rivers Lima and Cávado, in the Barcelos parish, and is surrounded by exclusively white varieties. Since 1982, this estate has been apart of the Sogrape portfolio, and considered one of the best Loureiro producing quintas in Portugal.

We hope you are all able to join us this evening, sharing your thoughts about each wine on the Adegga event page. And even if you can’t taste the wines with us, make sure to tune in to see what Oz and Charles have to say!!! It’s all at the main website for The Big Tasting.