The Calçotada: From Spain to Your Backyard

Fire up the barbecues and grab your friends. No, it is not Memorial Day weekend or a celebration of the first day of spring. Winter marks the time of year when Cataluña celebrates the almighty calçot. It is no secret that Catalans love to party, and the annual calçotada is just one more excuse to gather with friends to eat, drink, and celebrate. Fortunately, this is one unique culinary tradition which can be duplicated here at home.

Calçots originate from a variety of scallion from Lleida (Lerida), Spain. Although the origin is disputed, one of the most widely accepted accounts is that they were developed by a peasant farmer from the southern Catalan town of Valls (castells, the human towers, also originated here) at the turn of the 20th century. Local farmer “Xat de Benaiges,” as he was known, planted the sprouts of garden onions and continued to cover them with earth so a longer portion of the stem remained white and edible. Known as calçar in Catalan, it is an agricultural term meaning “to cover the trunk of a plant with soil” as well as “to put one’s shoes on.” And so, the calçot was born, well, created.

Learn about the wealth of Catalan gastronomy with Catavino! 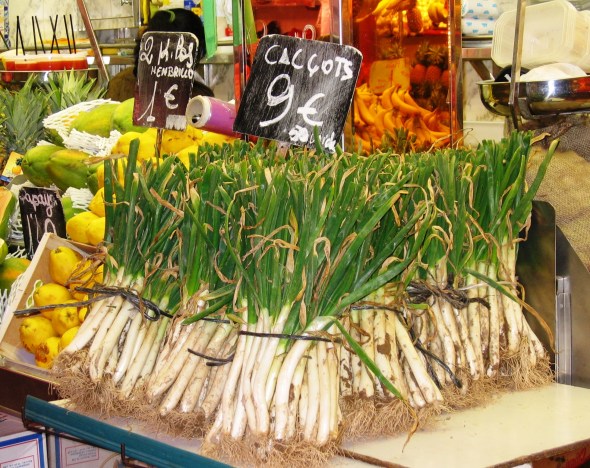 Larger than a typical green onion, the calçot also has a milder flavor. Once harvested the white (edible) portion measures roughly six to ten inches long (15 to 25 cm). Harvest of the onion starts in November and extends into April. Although much of southern Cataluña participates in growing the calçots, Valls is the only town to be designated indicación geográfica protegida IGP “Calçot de Valls” by the Consejo Regulador (since 1996). It was also here, at Restaurant Cal Ganxo, where I first partook of what has become one of my most memorable experiences in Spain, the calçotada.

Tradition trumps manners at a Catalan calçotada. The calçots are tightly packed in a single layer on an outdoor barbecue with roaring flames. Once charred, they are removed and wrapped in newspapers where they steam and become tender. After a short period they are removed from the paper and served on a terra cotta tile to keep them warm. But what to do now?

Your hands are the only utensils required. First, grab a bib (yes, a bib!) and put it on. If you choose not to wear one, I promise you will be one of only a few brave souls. Take a calçot and gently slide the outer layer of charred skin off (from leaves to bulb). You may be surprised at how easily it comes off. Dredge the white part of the calçot in the accompanying salbitxada sauce (a delicious mix of tomatoes, peppers, garlic, almonds/hazelnuts, vinegar, and oil). Tilt your head back and drop the calçot into your mouth. Bite off the tender shoot, discard the top, and repeat… again and again and again!

Along with the multitude of calçots consumed during the calçotada are other grilled epicurean delights including lamb, botifarra (a Catalan pork sausage), artichokes, and bread. Cava and red wine are also heavily consumed during the event, but do not expect to be handed a normal glass. Remember, this can be a messy affair. Red wine is consumed via the porrón (Catalan, porró), a traditional glass wine pitcher with a long glass stem tapering to a small opening from which you drink. The porrón is passed around from guest to guest with no one’s lips touching the stem allowing everyone to share without anyone contaminating the container. Do not be concerned about spilling. Remember, you are wearing a bib! 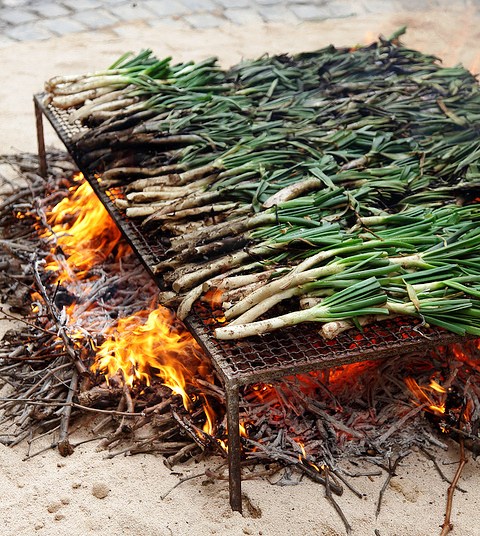 Now on to create your own calçotada. For starters, grab a bottle of Cava and pour yourself a glass. Marinate your favorite meats and/or vegetables in preparation for their turn on the grill. Prepare the salbitxada (dipping) sauce per the recipe below, and don’t be concerned if you have extra – you will want it! It is now time for the onions. It may be difficult to get your hands on a couple of bunches of calçots, but there are viable substitutes – spring onions, baby leeks, or Mexican onions. Trim the stems and rinse and place them tightly on the grill. Once they are just charred remove them and wrap in newspaper and set aside. Grill the meats and vegetables. Remove the onions from the paper and slide off the charred exterior to reveal the tender meat below. Dip in the sauce and devour. Enjoy with the other grilled items and lots of red wine.

The calçotada is truly a gastronomic experience. If you are fortunate enough to visit Valls on the last weekend of January or Cataluña in winter or early spring, partaking in a calçotada must top the list of to-dos. If not, recreate one at home and share the experience with your friends. Either way, it is a messy and memorable experience that you will want to enjoy time and again.

Discover the culinary secrets of Catalonia. Get in touch with us to enquire about our tours!