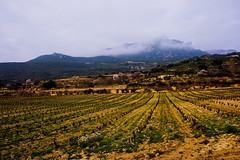 Having just walked into our hotel five minutes ago as the clock struck 9:30pm, I feel like a decade has slipped through our fingers. Over the past three days traveling throughout Rioja, we’ve seen one of the oldest and most traditional; one of the newest and most technologically advanced; one of the smallest yet productive; one of the most extravagant and luxurious; one of the most the quirky and inexplicable; and one of the most intriguing wineries in Rioja. And it’s not to say there haven’t been similarities from one bodega to the next, but the diversity we’ve experienced has been outstanding in everything from their philosophy of winemaking to their definition of a Rioja wine.

First, allow me to give you the general breakdown of what we’ve experienced since Monday morning. We began our week with a short, but informative, tour of Bodegas Tobia, producing wines from the humble setting of their garage. This was followed by lovely visit to Haro, where we ogled the wind swept sandstone buildings, ate a simple lunch of hamburger stuffed red peppers, patatas riojanas, white asparagus in a white sauce and lamb chops with roasted potatoes and red peppers, and discussed Ryan’s family tree, which passed through this area five centuries ago. As the fog rolled in come early evening, we arrived to Lopez de Heredia, where we took a two hour tour with the public relations manager, Lidia Zanzar, followed by an additional two hour wine tasting with one of the many family heirs to the bodega, Maria Jose Lopez de Heredia. Content and on information-overload, we ended the evening in our hotel room eating a simple salad and sandwich from some crazy German chain called, Krunch.

Come Tuesday, we woke up around 7am to grab a quick breakfast in the hotel before we enjoyed a winery tour and a long luxurious tasting with Bodegas Muga. Immediately thereafter, we dashed over to Dinastia Vivanco to experience both their winery and their innovative foundation on the preservation and education of international wine history, culture and elaboration under the guidance of Raphael Vivanco (one of the bodega owners) and Robert McIntosh (the UK brand ambassador and someone I’m sure many of your are familiar with in the wine blogging world). Watching the moon cast dramatic shadows along the steep and rocky Cantabrian Mountains on our way back to Logroño, we made a brief stop at the hotel to drop off our rental before we spent the next five hours in a small stone lined restaurant, tasting obscure Riojan wines with Robert, while firming up more details for the European Wine Blogger Conference this August.

Today. Six hours of sleep later, we woke up at the crack of dawn this morning to visit Roda, where we had our first opportunity to walk among the ninety-two year old Tempranillo vines, smell and feel the rich soils of Rioja Alta, and see ruins of a winery dating back to the 12th century. By early afternoon, we walked into the infamous Marques de Riscal’s “City of Wine”, spending the next five hours touring their bodegas both old and new, their spa featuring numerous different skin treatments with grapes, the famous Frank Gehry hotel and their one star hotel restaurant. Finally, as much needed showers enveloped our car in route to Bodegas Riojanas, we were able to spend a brief, but highly entertaining visit with Ana and Ana, the export manager and public relations manager for the winery. 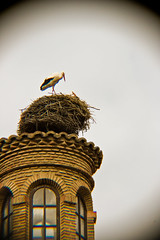 Exhausted yet?! God knows I am, but the exhaustion doesn’t even remotely equal the incredible experience we’re having, nor the amount of information we’re absorbing at an incredible rate! Therefore, I think it’s important we provide you with at least a few general observations we’ve had while zipping from Rioja Alta to Rioja Baja and back again.

Overall, I can say that our attitudes towards Rioja wines have shifted, while some of ours have been reinforced. A little vague, no?! But this topic deserves a full article, and for now, we can only provide you with our general impressions at this point. I can say, however, that we’ve tasted wines that have been elegant, silky, complex and absolutely incredible, while others have exhibited characteristics that spoke nothing of Rioja or its heritage.

Additionally, tourism is worthy to note. Rather than wine routes consisting of simple roads that lead you vines without entrance to the surrounding wineries, we’ve seen dozens of pamphlets advertising winery visits, museums and restaurants pairing Rioja wine with food. We’ve seen massive sculptures dedicated to the emblematic grapes of Rioja, heard of festivals celebrating the birth of Rioja wine, as well as several cultural events dedicated solely to the subject of wine.

What’s lacking? Good road signs, decent music and hotels? We’ve already shared with you how Spain loves to keep you on your toes, forcing you to pay the utmost attention to catch a quick glimpse of your exit sign. It’s a little frustrating, but if you accept that you need to rely on the Rioja force, inevitably, you’ll find your way 😉 Additionally, hotels are sparse and ratings fluctuate. If Rioja increased the number of affordable hotels and standardized the hotel chains so that two, three, four or five star hotel were consistent, I think they would find themselves amazed by the results. Finally, if I hear another Cure or George Michael song in a restaurant or bodega lounge, I may have to switch to Chilean wines!

Over the next few days, we’ll be visiting a handful of wineries that will most likely be unfamiliar to you, followed by a horseback ride in the moutains in conjunction with a tasting, and a visit to Bodegas Lan. Now, keep in mind that Ryan is only climbing on a horse for my benefit, so you may want to send him a wee bit of encouragement. He’s a good and tolerante husband of his wife’s passion for all things living.

Stay tuned, and we’ll share more of our experiences tomorrow!