The Fear of Sherry

Fears take on many forms. They can come from negative experiences we’ve had in the past, or they can simply come from the unknown, an unfamiliar experience.

Several years ago, my fear of the unknown was severely challenged one late Saturday evening while waiting tables in an upscale sushi restaurant. As night turned the corner to early morning, a few tables scattered about with half-drunk customers waiting for yet another bottle of sake, a customer casually inquired if I had ever tried uni. I promptly replied that, no, I hadn’t and wasn’t looking forward to trying it anytime in the near future.

John, having been a regular customer of mine for over a few months, looked at me and brazenly said, “but you taught me to always try things even though I may not like it. You’re the reason why I’m eating sushi in the first place and now you tell me that you haven’t even tried it after suggesting it to me?!”

I was caught. No matter what lame excuse I came up with to get myself out of this situation would make me sound like a hypocrite, which I was, because the last thing I craved that night was to challenge my taste buds. I wanted him to challenge me to a martini contest, sake or rare Japanese teas, anything other than uni! “Okay, I’ll do it”, I said with a forced grin.

Walking away muttering incoherent frustrations, John’s voice rattled over my shoulder, “…and put a raw quail on it for both of us. I heard that it really enhances the flavor…wait, you told me that!” Yeah, I know I told you that, because I heard it from the sushi chef, but that didn’t mean I wanted to actually follow his advice.

Uni are the ovaries of a sea urchin placed on a bed of rice wrapped in seaweed. I had served them for well over a year now and couldn’t bring myself to try them. They’re orange, slimy and smell more putrid than you could ever imagine. I innately hated these things due to their aroma and appearance. The Japanese staff, however, swore by them, claiming that they would make my hair silkier and my skin glow. Albeit a nice image, it wasn’t one that I wasn’t to test.

Walking back to the table watching the Uni wiggle from side to side within their seaweed encasement, I placed the koi shaped porcelain plate down with a ‘plunk’. “There…your sushi sir.” John picked up his piece and smiled, “bottoms up!” “Yeah”, I responded, “bottoms up”. As I bit into the egg yolk of the raw quail egg, eventually breaking the skin of the sea urchin, a strange salty and creamy mixture began to circulate in my mouth. At first, I recoiled, thinking that I wanted to spit it out, but then something pleasant happened. The rice began to absorb the salty water from inside the uni, leaving only a savory flavor behind. What remained was creamy, exotic and delicious.

Although John couldn’t stomach it and made a bee line to the restroom, that night made a considerable impression on me. Appearance and preconceived notions of what you think something “will be” won’t nurture adventure. It will only nurture more hesitation and fear. 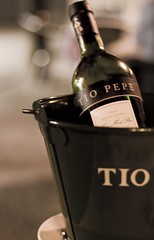 The ridiculous logic I applied to Uni was exactly what I applied to Sherry over the years. Each time I tried it, I placed it in the “highly alcoholic and good for Ryan” category. I didn’t try to learn about it, nor did I experiment with it. I sipped it, smiled and thought it would be better as paint stripper than a civilized drink.

Was I scared of Sherry? Not in the same way that I was viscerally afraid of Uni, but I was hesitant and allowed myself to remain ignorant. I didn’t want to learn, because it not only took too much effort to understand the wide variety of flavors and styles sherry encompasses, but it also required me to let down my guard.

Allow me to preface this by saying that to live with Ryan one must try something new. From boiling cow tongues to fried pig’s ears, I’ve covered the gamut, but sherry is different. When tasting a flight of Sherries ranging from a 30 year old Pedro Ximenez to a fresh young Fino, is like comparing a bike to a jet. Yeah, they both move, but they have nothing in common. To taste Fino and be offered an Amontillado will not guarantee you the chance to either compare them to one another, nor to a style you’ve had in the past. You simply can’t fall back on hubris. They are so different, so unique and so completely of their own style, comparing them only made me yearn for something familiar.

Fear can be wonderful, guarding us from potential danger, but it can also keep us from exploring something new, different, interesting, pushing our boundaries to incorporate a fresh idea, flavor or smell. I understand that we want to come home on a Friday and pop open a bottle of Syrah, savoring in its warm familiarity, but if let ourselves be dazzled and excited by a new sensation, life gets interesting!

My suggestion to you is to go out to your favorite wine shop and request a bottle of fresh fino (less than year old after bottling), a bottle of amontillado and an oloroso. Go home and put all three bottles into the fridge, allowing them to chill to approximately 9 degrees Celcius. Then go pick up a pen and paper, sit down in a comfortable chair and ask yourself, “what are my assumptions about sherry?” This may seem a bit drastic of a practice, but we all hold prejudices. Every single one of us walks into a situation and makes assumptions of what we’ll experience. You may find yourself a bit amazed that you expect it to taste like port, be overly sweet, too oxidized, something reserved for old biddies who savor it would their bridge game. Notice what comes to mind before you open all three bottles. Then, after you pour each of sherry wine into a white wine glass, or sherry glass, take inventory again. Finally, take a sip. What were your preconceived notions of what sherry would taste like accurate or did you simply fear the unknown?

Facing your fears, your assumptions and your prejudices takes courage, a lot of courage. I encourage you to not let you preconceived notions stop you from experiencing a new sensation. And remember, your tastes change. Even if you tried sherry years ago, disliking the experience for one reason or another, don’t let that stop you from trying again and again.