The Manzanilla of the North 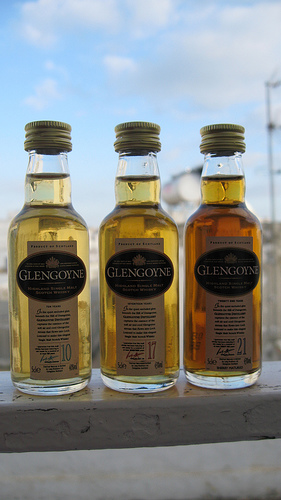 OK, if you’re wondering about the title, then that’s what they call Old Pulteney, and if you’re still wondering, keep reading.

On a trip to Scotland last week to meet my new nephew I could not pass up on a visit to a whisky distillery. Scotch and Sherry have strong connections on two levels going back many years – centuries even – so this post is not exactly off-piste for an Iberian wine blog.

You can still see names painted on the sides of Sherry bodegas, which have a decidedly Scottish air. In El Puerto de Santa Maria it’s possible to sip a glass of Fino at the Grant bodega most Saturdays just after midday and until recently opposite the bullring there was a large sign announcing the defunct Duff Gordon bodega. I’m sure my Scots friends would agree Duff and Gordon are two thoroughly Scottish surnames. Most of the bodegas owned by Scottish families have quietly disappeared and many of the families too although the odd “McPherson” and “Ferguson” still crop up in the local phone directory. However, there is one “Scottish” bodega which is very much alive and well, Gonzalez Byass, who make the very successful Tio Pepe, is owned by the Gonzalez-Gordon clan. So that’s the first connection: Scottish blood.

Now to the second connection: Whisky was traditionally bootleg and drunk pretty much straight from the still. The British establishment, starting with George IV, acquired a taste for the stuff, particularly if it had seen a bit of time inside a barrel. This led eventually not just to the legalisation of distilleries but in 1915 to a law requiring a minimum of 3 years in barrel for whisky. As the favourite British tipple of the time was Sherry, and shipped in barrels, you can imagine there were many empty Sherry butts knocking about. A lot these butts made their way north and that’s how old sherry wood became fundamental to the production of Scotch as we know it. 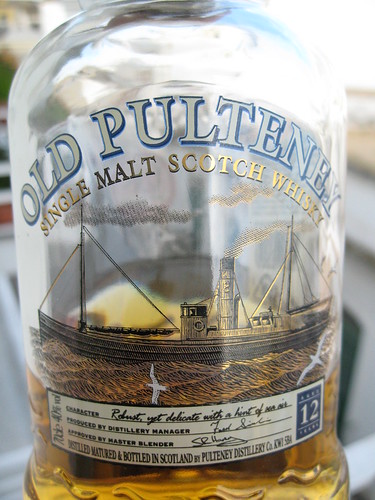 You might still be wondering about Old Poultney, but don’t worry. I’ll get to that at the end.

A few words about the distillery we visited last week: Glengoyne is a charming little “farm” distillery just south of Loch Lomond. It is not far north of Glasgow, just below the Campsie Fells and easy to get to. Unfortunately I don’t have any interesting pictures because cameras are banned due to the explosion risk, and I won’t bore you with how whisky is made. I will, however, recommend a visit to this friendly place. If you ever get the chance, you must. After our tour we tasted the 10, 17 and 21-year-olds and a cask-strength whisky. It was hand-luggage only on the flight home so the three wee bottles in the picture above was all that made it into my bag.

Finally, to stop you wondering: Old Pulteney as you have probably guessed uses a bit of old sherry wood, the distillery is also right next to the sea. The air and wood leave their print on the ageing whisky. A dram (my rather empty bottle, right, qualifies me to comment on this) of Old Poultney evokes the clean, salty and Sherry (!) flavours of Manzanilla. Not for nothing is it called “The Manzanilla of the North”.