The Menu of the Day: Spain’s Best Culinary Value for Your Euro

Last week, we visited the small town of Poboleda in the heart of DOC Priorat, located just south of Barcelona. After a death-defying jeep ride along the beautiful terraced vineyards of Mas Doix – Dramamine anyone? – we huddled together in a family owned restaurant to enjoy an absolutely spectacular Menu, del Dia. Savoring flavorful habas beans with chunks of butifarra negra, sumptuous roast duck, and homemade flan, it occurred to us that to date, we have failed to share with you one of the best culinary values for your dollar.

Mind you, although we had heard about the menu of the day upon our arrival to Spain, we continued to order off the normal menu until it dawned on us that we were spending a considerable amount more for less food. It wasn’t until we enjoyed our first menu of the day in Madrid that we finally understood how amazing the meal can be. (photo by luzezita entesinada)

Discover the secrets of Spanish cuisine 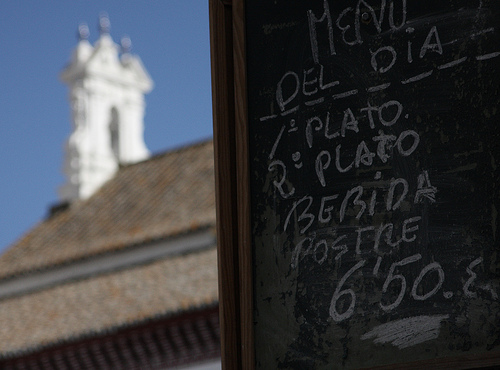 During Franco‘s 30 year reign, el menu del dia (menu of the day) was established to feed the starving masses a nutritious and balanced lunch on a budget: essentially, the working man’s meal. Served between 1 and 4 in the afternoon, when air conditioning was nonexistent and heatstroke was common, this 3-course menu came complete with bread and a beverage, allowing for the maximum amount of consumption for maximum savings.

Nowadays, prices will range dramatically depending on where you are on the peninsula. We’ve seen prices as low as 5.50 and as high as 21 euros. However, as a rule of thumb, the menu of the day will average around 12 euros. Will price dictate quality? Not necessarily. We’ve enjoyed amazing homecooked meals in Rioja for as low as 8 euros, far outweighing the 21 euro menu from the posh restaurant up the street. In reality, the quality is hit or miss, but its always worth a shot.

How do you know if a restaurant has a menu of the day? El Menu del Dia will typically have their featured dishes scrawled in white on a chalkboard propped against the outer restaurant wall listed as El Primer Plato (first course), El Segundo Plato (second course) and El Postre (dessert). However, if you find a restaurant that doesn’t have their menu listed outside, this doesn’t mean it’s not available. In this case, simply ask the server “Hay un menu del dia?” If it is available, they will list it for you verbally. If your Spanish is rusty, politely ask them to list it in English. If their English is rusty, go for a game of Charades. Having spent over a year using this method, I can guarantee both entertainment and a learning opportunity. Granted, you may get stewed pigs feet instead of a chicken filet, but hey, that’s how we learn 🙂 At least you’ll never forget the word for pig’s feet again.

What can you expect from a typical Menu del Dia?

To be clear, the menu of the day is not your only option, as most restaurants will also have a full menu to choose from. There are times when we simply want a quick bite without a full three-course meal or have a specific dish in mind, motivating us to order from the main menu. In short, follow your taste buds.

A few rules of thumb:

The greatest advice we have, explore! You won’t always get a phenomenal meal, but lunch is a fabulous way to explore various gastronomic treats!

Book a Tour to Spain with Catavino and benefit from our experience!