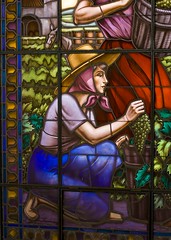 Editor’s Note: A short while ago, a friend, and cohort, of ours contributed a piece on the the region of Montilla Moriles, located in the southern political region of Andalusia; along with its indigenous grape, Pedro Ximenez. Being that PX is a wonderful wine to sip after dinner on a cold winter’s night, savoring those rich raisin and subtle spice flavors, we thought this might influence you to get out there and get yourself a bottle!

Vinos de Jerez in the Netherlands, wrote that the demand for Pedro Ximenez sherry wine is larger than the production. Since 1975, when Jerez reached its peak in the export trade, no sherry or sherry-like wine has ever experienced a larger demand than sale. Hence, this is a unique situation when considering the history of sherry wine.

If you do not know Montilla Moriles, and you would like to know more, here follows a short introduction. Later, I will cover a few of the most interesting producers of Montilla Moriles wines, which I’ve recently had an opportunity to visit.

Montilla Moriles is one of the oldest wine areas in Spain, but ironically, you hardly ever hear about the region. And if you have heard about it, then there’s a big chance the context was not very positive, because the wine style resembles those from Jerez. Sherry has been in a crisis since the beginning of the 80s, mainly because the wines do not appeal to a broad public, as it lacks fruitiness. On top of that, in many countries, sherry has a severe image problem, as a cheap, alcoholic drink for grannies.

Nevertheless, the sweet wine Pedro Ximenez is receiving quite a bit of attention lately. These almost black-colored ropy and intense sweet wines, better known as PX, are challenging from Banyuls to an ideal pairing with chocolate desserts, blue cheeses and even with ice cream and raisins. It’s inconceivable that this wine wasn’t discovered long ago by the wine adoring public.

Although I am mainly speaking about Pedro Ximenez as a sweet wine, those of you not familiar with the term PX, or Pedro Ximenez, should also know that PX can be made into a dry sherry wine. Pedro Ximenez grows in the Montilla-Moriles region in Cordoba (Andalusia). It has been the predominant grape for centuries in this region, and the basis for all kinds of wines like: slightly fruity dry wines, a bone dry fino, amontillado (notice something peculiar inside the name “a-montilla-ado”?), oloroso and palo cortado. If you thought that pedro ximenez only was for sweet wine, you would be mistaken.

If the term “pedro ximenez” is written on the label, then you can be pretty sure that the wine inside is sweet. The wine is also labeled as “PX”, the initials of pedro ximenez. To avoid misunderstandings, however, I will refer to the grape in lower case and the wine in upper case.

Many people think PX is only a sherry wine from Jerez, but that’s not completely correct. What many people don’t know is that the bodegas in the sherry region use the young, sweet PX from Montilla Moriles as a base in their solera systems in Jerez. This operation is entirely legal. The wine law says that D.O. Jerez and D.O. Málaga can buy sweet wines from Montilla Moriles to make their own wines (in the past, it was mainly used to make cream sherries, which is a blend of oloroso and cream. Now, Jerez also buys the young PX sherry wine to sell under the sherry and Malaga label.

The Image of Sherry and Montilla Moriles
Montilla Moriles has a difficult youth. As the little brother of D.O. Jerez, Montilla Moriles did not benefit as Jerez did from the huge export sales in the 70s, as it was seen as the cheap alternative of sherry. Then, once the term “housewife gin”, synonymous for all sherries and sherry like wines, was introduced in Holland – one of the two main export markets – Jerez and Montilla Moriles lost a huge market share. Sherry was in a deep crisis by the mid 80s, a period that coincided with the introduction of stainless steel tanks and cold fermentation techniques that resulted in a rise in demand for younger fruitier and fresher wines. In spite of all the efforts made by the sherry producers, it would last until the beginning of 1990s before some producers successfully introduced a renewed sherry image. Most likely, it was Emilio Lustau who started it all with the Almacenista range. Almacenista sherries are traditional sherries but of a higher quality, presented in a more elegant fashion, and are priced on an average, 5 to 10 times the normal price of sherry. However, the beautiful olorosos, amontillados and palo cortados were not as popular as the PX, which was embraced as liquid a bon bon both by restaurants and by specialized wine shops around the world at almost every level.

Montilla Moriles’ Own Identity
Now, sales of PX are going up, and as Wines from Spain even says, the demand for PX is higher than the production. Montilla Moriles is becoming aware of the enormous potential that wine, and after centuries, this region is finally crawling out of the sherry shade. No doubt, the Consejo Regulador of Montilla Moriles must be very proud.

I’m convinced that PX will give a huge boost to the image of sherry and sherry like wines in general. I recently was in Montilla Moriles for the first time during the pasera, which takes place over the last few days of August and continues up through mid- September. If you’re interested in Andalucia, Spain, and you are planning to see Cordoba in late August, I recommend you visit Montilla-Moriles.

*After 15 years being professionally involved in the sherry business, I know, unfortunately, that it is difficult to reach some readers when it comes to the subject of sherry wine. The term noir the blancs (PX is almost a black wine made of white grape), refers in an educational way to the wine term “blanc the noirs”, a white wine of blue grapes.

The author of this article is Emilio Saez van Eerd, official sherry educator since 2004. He worded for Domecq and Osborne between 1992 and 1998, and is currently in association with The Sherry Institute in the Netherlands. He organizes wine tastings for restaurants, hotel school students and for consumers. Emilio is also the owner of the international wine school in Alicante.