Just to preface this article, we decided a few weeks ago to dedicate a large chunk of our trip to Rioja to figuring out what the difference is between modern versus traditional Riojan wines. Now, I could easily say that we both have a relatively good understanding, but I think it’s important to differentiate the perspective of the consumer from that of the winemaker. Hence, we sent out an email to several Rioja wineries last week asking their winemakers how they would personally respond to said question. What I’ve included below are the responses from both Bodegas La Rioja Alta and Bodegas Martinez Laorden, and you’ll have plenty more in the weeks to come by both video and written; but for now, you can at least gain a little taste as to what we’re experiencing on our journeys here!

Question: How do you differentiate between a traditional verses a modern wine of Rioja and what do you feel is both positive and negative about each style?

First off, I’m not sure if I necessarily understand the difference between traditional Rioja versus modern Rioja winemaking, unless we say that traditional Rioja hasn’t evolved over time. I believe that wine has suffered from constant evolution, adapting to the current tastes of the consumer. What we have always tried to avoid are the fads with an expiration date. I’d like to believe that we represent classic wines, where elegance, subtlety and complexity of aromas and flavors are the keys to a great wine: wines that are balanced, pleasant and allow for a long persistent finish.

The new trends, which appeared to be influenced by wines from California, Australia, etc, are wines, at least in their early years, were seeking quality in power, strength and big structure. High grade wines, dense with color, were the wood flavors overpowered the rich fruit flavor. I believe that we are now creating a pendulum effect, where modern wines are slowly becoming more classic in style; whereby, moving towards fresher wines with balanced, well-integrated wood and fruit, without forgetting the essential characteristics that make a wine great. 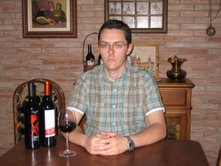 From my standpoint, the difference between a traditional and a modern wine from Rioja is that the latter is fuller bodied with deeper color. A modern Rioja wine is lighter and more fruit-forward, having spent less time in oak than a traditional Rioja wine. There’s nothing necessarily more positive or negative about either wine, because it completely depends on the tastes of the consumer. I, however, am more in favor of modern wines where the fruit is perfectly integrated with the toasted wood, not as in the case of a traditional wines where the oak over powers the fruit; giving the wine an overly matured flavor. A modern wine requires modern winemaking techniques, thus adapting to the demands of today’s market.