Those familiar with Spain have undoubtedly heard of the encierros (running of the bulls) in Pamplona, but there are other events where Spaniards also celebrate animals invading their everyday urban space. One of them is the Fiesta de la Trashumancia, when traffic is completely cut to allow herds of livestock –mainly sheep- to parade through Madrid’s most bustling and upscale areas. Imagine London’s Piccadilly Circus full of sheep instead of cars and pedestrians!

Celebrated once a year –generally in early autumn- this bleating procession through the city began as a symbolic way to defend ancient droving and grazing rights threatened by modern agricultural practices and the overdevelopment of urban areas. Since 1995, when the Spanish Ministry of Agriculture decided to support the Fiesta de la Trashumancia as a cultural celebration, it has become a major tourist attraction; a colorful event where music is played as farmers and animals march through the streets of Madrid.

In truth, the sheep and wool industry is strongly connected to the history of the Spanish economy. Spain started out in the middle ages as an agricultural and sheep raising country with migration at its heart. The movement of herds was a consequence of the two clear climatic regions of the Iberian Peninsula -the dry south and central plateau, and the rainy north- and consists basically in adapting the stay of livestock to the natural growth of fresh pastures. In May, when the dry season starts, the herds migrated towards the mountains in the north to spend the summer, and returned south in September before the cold winter started. The livestock was reared using a network of close to 80,000 miles of paths –The Cañadas Reales (roads for drovers)- that crossed the country and, some suggest, could follow the routes of migratory wild animals (deer, aurochs,…) dating back to Neolithic times. Through time, the Cañadas became a network of continuous exchange of people, goods and knowledge; they became a system of cultural exchange between regions of the peninsula. Theoretically protected from occupation by a Spanish law dating back to the 13th century, they have been steadily invaded by the sprawl of houses, roads, dams and other infrastructure that stemmed from the country’s socio-economic revolution in the 1960’s.

Despite the fact that modern Spanish life is skewed towards the urban rather than the rural, Spaniards are shepherds at heart! We are proud of these ancient droving traditions that have brought about all kinds of cultural manifestations. Among these is the Spanish folk song still sung today in the Sierra de Cameros: ‘Ya se van los Pastores’ (‘The Shepherds are leaving’): “Ya sec van los pastores / a la Extremadura / Ya se queda la Sierra / triste y oscura” (“The Shepherds are leaving / to Extremadura / The Sierra is left sad and dark (empty)” and the culinary experience that are the “Migas del Pastor” (Shepherd’s Crumbs).

Migas was the migrating shepherd’s hearty breakfast, cooked in a pan over an open fire using what they had on hand and what little the harsh Spanish plains provided: old bread, lamb suet, garlic, water and salt. They would add to this base various other ingredients depending on availability. This originally humble dish is still served in many Spanish restaurants today.

Traditionally, Migas were shared and eaten straight from the pan, but this dish works well as a starter served in individual plates or as a main adding a fried egg on top in the huevos rancheros style). Being a full flavoured and stomach filling mix of pepper, garlic, chorizo and bread, pairing wine with Migas requires a guzzler with the right amount of character, like the red Tempranillo based blends from Extremadura’s own D.O. Ribera del Guadiana. Go for the fruitier and lightly oaked Crianzas from the better producers in the Tierra de Barros subzone, as they will have the right dose of complexity and enough fruit to hit the mark. 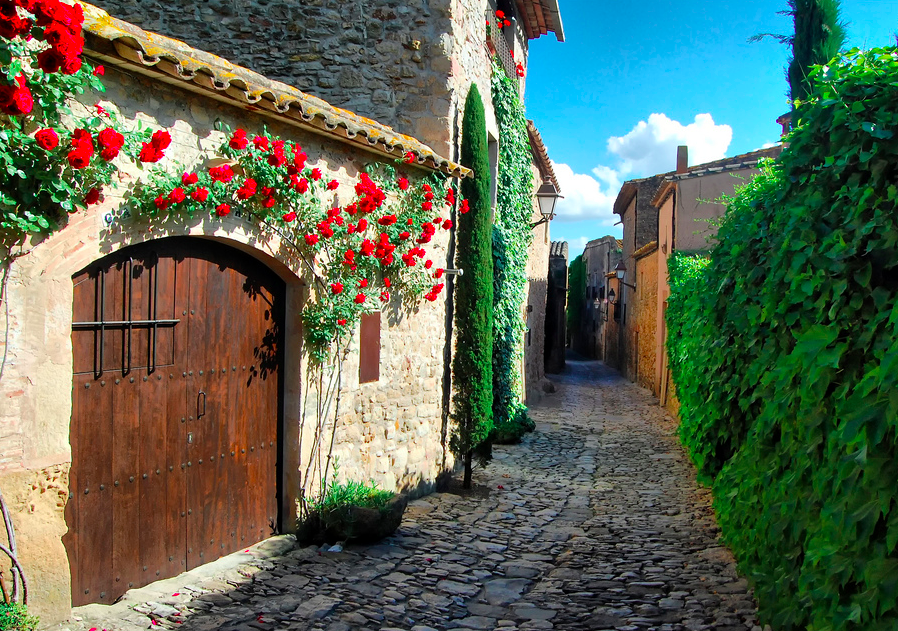 With today’s tough economic situation in Spain, the underlying message behind the Fiesta de la Trashumancia migration festival is that we need to take into account not just the demand for jobs and industrial recovery, but the importance of social and environmental balance in our country’s restructuring. Shepherds and their Trashumancia culture represent the practice of a sustainable economic activity for over six centuries. Even though the migration is much more modest than it once was, shepherds might have found new friends in the hikers, cyclists, horseback riders and others who continue to use their cañadas in the 21st Century.

Countryside and Nature Tours in Spain

If you’re interested in experiencing a more rural or natural side of Spain, complete with horsebackriding and treking, contact us! We’d love to put together a rustic and traditional wine and culinary experience just for you.