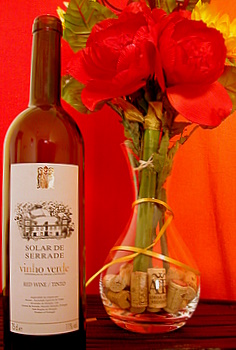 “Red? You sure that’s what you mean?” said the salesclerk looking at me dubiously.

“Sim, Vinho Verde TINTO“, I repeated to each and every retailer in various wine shops while hunting for this infamous red counterpart of the popular Portuguese white wine, Vinho Verde.

What surprised me during my quest, for this apparently unpopular style of wine, is that almost a third of the wine produced in the region of Vinho Verde is red. So why is a Vinho Verde Tinto such a bizarre and foreign idea? After trying a few bottles in the past, and literally spitting them out and dumping the rest down the drain, it is not difficult to understand people’s apprehension!

But surprisingly, I’ve come to learn that many Vinho Verde Tintos tend to have the exact same flavor profile! And although they are produced with the same high acidity “greenness” as the white wines, typically followed by a second malolactic fermentation to allow for a smoother and more full-bodied character, many producers seem to overlook this second essential step – choosing instead, to keep the high acidity which produces a very unbalanced wine. Taken from the D.O. Vinho Verde website:

However, the occurrence of the malolactic fermentation has its costs: a reduction of freshness and primary aromas proceeding from the grapes. For this reason, many oenologists prevent its occurrence in the white Vinhos Verdes, which must have freshness and young aroma. The malolactic fermentation mainly is encouraged [but not obligatory] in the red Vinhos Verdes, whose quality depends more on its flavour complexity than the aromas intensity.

The wine is then released, almost exclusively, within the regional market, and unless you are one of the locals who have acquired a taste for it, consuming it out of the traditional clay bowl, most people end up tossing it.

But I refused to believe that all Verde Tintos tasted bad. Why would a winery produce this much Vinho Verde Tinto without producing some higher end labels?Ã‚Â  I decided to give the style a second chance before writing this article and set out in hopes of finding at least one that I could speak highly of. In all 8 stores I checked out, only one carried a decent looking bottle that I bought for a relatively low price of 2.35 euro. The 2007 Solar de Serrade Verde Tinto from Quinta de Serrade, a reputable producer from what I was told, located in the sub-region of Monçao, in the northern part of the Minho. After bringing the bottle home, I chilled it down and sliced up some creamy local sheep’s milk cheese as a recommended pairing. I then poured a glass and hoped for the best.

The wine was an eye-opener, smooth and full-bodied, with bright red berries and currants on the nose which were mimicked on the palate. I still detected the signature greenness, but this time, the acidity was more tame and pleasing on the palate, without overpowering the subtle light berry flavors; whereby, making the 2007 Solar de Serrade Verde Tinto the first balanced Verde Tinto I had ever tasted.

I think what helped make this particular Verde Tinto considerably better is that Monçao has a warmer and drier climate than the rest of Vinho Verde; whereby, allowing for drier, fuller-bodied wines. In addition Quinta de Serrade chose to ferment this wine to 11% alcohol, a higher percentage than most Verde Tintos, normally clocking in around 8-9%. The cheese also turned out to be a great pairing with the wine, complimenting the body, while perfectly contrasting the acidity.