Please bear with us as we’re making a little detour from Spanish and Portuguese wine to bring you another Wine Blog Wednesday entry. Spittoon is hosting WBW #42 with the eccentric caveat that all entries must describe an Italian red wine in exactly, seven words. Now although Italy is not Rioja (our featured region of the month), nor is it located in Iberia, there are several similarities to justify our entry: it’s been said that Rioja’s etymology stems from the color red in Spanish, Rioja is famous for their red wines, both Italy and Iberia begin with an ‘I’, and both countries are famous for their cured hams! Need I say more?!

Now keep in mind, finding foreign wines (wines sourced outside of Spain) even from our closest neighbors is like finding a needle in a haystack. For whatever reason, Spain likes to keep itself surrounded by its own grape juice, principally those from Rioja. Therefore, to participate in this month’s WBW our choices were to either make the two hour roundtrip hike into Barcelona, or walk two blocks up the street to our local supermarket, praying we’d find something red from Italy. Thankfully we did find two lambruscos; although we’re completely clueless as to why they stocked two cheap Italian wines among the shelves dedicated solely to Spanish wine. Weighing our two choices, we settled upon the more expensive CIV&CIV Lambrusco Grasparossa di Castelvetro for a whopping 1.85 Euro. You don’t even have to like the wine for this price. For those of you not familiar with Lambrusco, it is named after both a grape and a wine originating from the four zones in Emilia-Romagna and one in Lombardy, especially around the central provinces of Modena, Parma, Reggio nell’Emilia, and Mantua. Of those wines considered of quality (a term typically associated with Lambruscos), they are said to be frothy and effervescent red wines, made to be drunk young and originating from the DOCs: Lambrusco Grasparossa di Castelvetro, Lambrusco di Sorbara, Lambrusco Salamino di Santa Croce, Lambrusco Reggiano, and Lambrusco Mantovano. 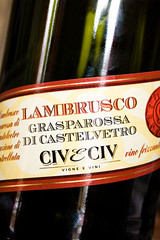 If I seriously dig deep into my memory bank, I think the last time I had a Lambrusco was at Bucca di Pepo, an Italian Restaurant located along a small tributary in St. Paul, MN, approximately six years ago. Hence, when we popped open this bottle last night, I was struggling to remember if I even liked Lambrusco, and if it could be compared to any of the red vinho Verdes we’ve had or even a cava rosado. Sadly, neither was true, at 3% alcohol, this wine can be described as:

Will we be picking up this wine again in the near future? Ahhh, no! But we thank Andy for a fabulous topic and look forward to future WBWs with an equally challenging task!!!

Tomorrow, we’ll be back on track with Rioja, diving into topics such as the indigenous grapes of Rioja, a profile of the region, a reminder of some fun articles we’ve written on Rioja in the past and how to read a Rioja label. Come Thursday night, we’ll be interviewing Pancho Campo, a crusader whose dedicated his studies to the current climate’s role in altering wine, winemaking and our vision of what conservation means in the world of wine.

(The first photo was borrowed from Wine Country.IT, as a result of our absentmindedness for not shooting a photo before we consumed the bottle 😉