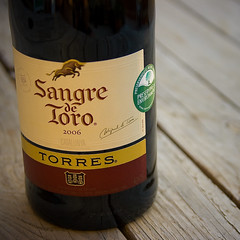 Today marks the 48th edition of Wine Blog Wednesday, an event that Lenn probably didn’t even realize would last so long, or have so much success, upon its inception. Four years later, this internet meme has become a staple of any wine blogger’s monthly posting schedule. It is also an event which has exposed wine bloggers to a variety wines and styles that they either may not have tried before or thought to explore. So for the 4 year anniversary, it is only appropriate that Lenn has asked us to head back to our roots andÃ‚Â  look at what brand really made us first fall in love with wine, or as they say, “gave you that ‘aha’ moment” where you finally understood the joy that wine is.

For Gabriella and I, this is a bit hard for us to do. I remember my ‘aha’ wine being a St.Francis Zinfandel that I splurged on with my friend Elly. We read in a paper that it scored “huge points”, and not knowing what points were, we took it at face value to mean that the wine was the creme de la creme. And as the bottle was only a small stretch in our combined budgets, we purchased it, realizing then and there that wine was worth splurging on from time to time.

That said the wine that was my go to wine during college, the one I brought to parties to seem more sophisticated than the people who had their own 24pack of light beer, was Vendage Merlot. A 1.5L was around $8 at the time, thinking it was so fine and refined! Revisiting this wine approximately four years ago, I found that the only good use for it was as an addition to my vinegar bottle, a place that improved it tenfold.

Sadly though, we don’t have the opportunity to visit these gems anymore, as a result of our location. Therefore, we felt it would make more sense to revisit a wine that introduced both of us to Spain as a wine region. Sangre de Toro, or Bulls Blood, is a wine renown to most Americans, as their first Spanish wine. A blend of Garnacha and Cariñena from Catalunya – a small irony that a Catalan wine represents Spanish wine to so many, this wine was cheap and tasty. At around $6 on sale at my store, I could easily afford purchasing more than one. Plus, there was an additional attraction beyond price, the little plastic bull that hung around the bottleneck. This bull is a true social object, as defined by Hugh Macleod. I remember selling this as a pizza wine for Friday night gatherings, and as a perfect match for my customers first attempt at paella. I’m not sure about the paella recommendation anymore, but this is definately still a great pizza wine. Simple, pure fruit, light, yet with a nice round body, for the money, you can’t do better.The low end needs more great values like this!

For Gabriella, Sangre de Toro holds a very special place in her heart as not only as her first Spanish wine, but also the first wine she attached to a group of close friends.

As she tells it: At age 23, my friend Becky had gained the title of “wine snob”. She would analyze each and every page of Decanter, hunting for wines of both great esteem and great values. Occasionally, when she found a particular wine that intrigued her, or that she found especially “cool” and “interesting”, she would throw an all out hipster party, typically requiring everyone to don their most “urban” outfit.

Her Sangre de Toro Friday night bash was a hit! So popular was this wine for its price, its bold flavor and its trinket that it became the required backup wine for each and every future gathering. Plastic bulls lined up across her Ikea kitchen table, ready for battle. Under a precariously dangling light bulb from her sea blue colored ceiling, we would spend hours devising new games with our impressive collection of “speed bulls”. Horns turned backwards, the bulls would be required to do everything from land into a wine glass ten feet from the kitchen with a flick of a finger to being part of an elaborate pyramid of bulls stacked 15 high. As you can imagine, the wine was rarely spoken of, but instead became a seamless and enjoyable part of the background among fits of laughter and erratic beats streaming from her favorite grunge band over the stereo.

I loved her parties. I loved how no one talked about the wine, yet it was the cornerstone of every get together. And beyond all else, I love the fact that this wine reminds me of a person I both miss and hope to see again one day.

Thanks Lenn for bringing up a lovely memory and a smile to my face.