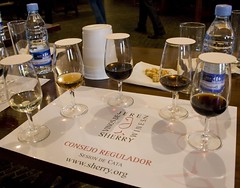 And…..we’re back after 5 days and 4 nights in Jerez de la Frontera, the defacto capital of all things sherry related. As many of you know, we were in Jerez to learn all about Sherry. The D.O. of Jerez for the past 3 years has been working to educate writers, wine educators, wine lovers and sherry nuts about this elusive and mysterious beverage. Sticking to the policy of full disclosure in blogging, the rules to participate were simple. You find a way to get there and they in turn, took care of lodging, food and transportation. Seeing that this was a great way to deepen our understanding about Sherry, while becoming certified as Sherry Wine Educators, we took the opportunity and booked a flight to see what the excitement was about. Turns out we were glad we did.

We flew down on Tuesday night, a day before the seminar, so that we could explore a bit of the city. This was a great idea because our first dinner showed us why this seminar is so important to the region and its wines. After wandering the city, we sat down and ordered a few of Jerez’s infamous seafood treats alongside a bottle of Fino sherry. We thought it was a perfectly reasonable request seeing that we were in the capital of the sherry world. To our waiter, however, it seemed as though we had martian antennas sticking out of our heads and funny space suits on. His response was simply, “Do you mean a white wine?” To which we, somewhat confused, replied, “Yes, we want a white Fino sherry.” The volley continued, “Do you know what a Fino is? Are you sure you don’t mean a white wine?” It was at this point I began to notice that the company we shared at this small outdoor terrace included tourists of every ilk and nationality, all of which seemed to be nursing beer from large wine glasses. We were beginning to understand. It became clear that this poor waiter had more than once, served a Fino to some unexpecting tourists only to have them shocked at the beverage put before them. As we later found out, only locals order a bottle of Fino with dinner(or two!). We may speak Spanish but our accents are far from stealth when trying to blend in; whereby prompting the staff to inquire of our nationality. They didn’t expect us to be from the States and were happy to have a cold bottle of Tio Pepe sitting before us. At this point the evening moved forward with more smiles and conversation as the wait staff realized we did appreciate the fresh bottle that quickly emptied itself into our glasses.

Sherry is plagued by this scenario, day after day, and within its own home town. It’s just not fair. I know some of you are rolling your eyes and about to click away, because we relentlessly write about a drink we love, but humor me with one more short story.

It was about 2 years ago when my old wine buyer friend from my previous US based employer was in Madrid fresh off a whirlwind tour of Spanish vineyards. He had tasted wine non-stop for one week and had 2 days left to explore Madrid on his own. Meeting up with him one night, we found our way into a bar for a few drinks where I asked him if he had tried any sherry during his travels. He responded that he had not and we quickly asked the waiter what he had to offer in the way of a Fino. His response was that all they had was a bottle of Tio Pepe. My friend being a person who has tasted more wines than most replied, “Oh that’s ok. I have had Tio Pepe many times before.” Nonetheless, I sent the waiter away with an order for two glasses. I explained to my friend that it might be different this time. Now the part I relish to this day. When my friend picked up his glass and, as any wine lover is wont to do, shoved his nose into it inhaling its aroma, his eyes began to light up. “This isn’t Tio Pepe!” It was, but it was something that he had never known before, FRESH. Fino needs to be drunk fresh, and sadly in the USA, it’s hard to find the freshest example of this Iberian treat(though this is changing!). At that time, I obviously had no idea that in two years time, I would be learning about sherry in the hopes of educating others, but I did know that I needed to spread the word about this misunderstood beverage.

I want to end this with a final word about sherry. What we learned this past week was very enlightening, and at the very least has wet our appetites to learn even more. So many styles and variations, there is absolutely something for everyone. We tasted the most delicate Finos and Manzanillas, thick unctuous PXs and nutty, yeasty Amontillados. The result is that we feel like we only have spotted the tip of what is a oenophilic iceberg of flavors. We’ll try not to overdo it, but we do ask that you follow us as we recount some of the fun things that we have learned and people who we met.

Also, we want you too know that we are now available for classes. Both Gabriella and I are available if you find yourself in Spain to help you learn about Sherry. I know we sound like an advertisement, but we mean this with heartfelt honesty: we love this wine!