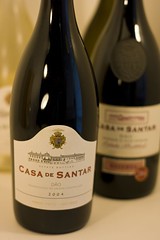 We knew we had to go big with our Wine Blog Wednesday entry. We debated and debated over the subject, unclear as to exactly what approach we should take. Do we go with a region, a varietal, a style? With well over 40 bottles of Portuguese wine still sprawled out on our dining room floor, beckoning us to drink them, we felt a little flustered.

Ahh, but then the magical light beamed over the four Casa de Santar bottles sitting quietly in the corner dedicated to the wine region in north central Portugal, Dão (I bet few have corners dedicated to a wine region). The Dão region became a DOC in 1908, but when Salazar came into power in the 1940’s, he introduced the co-operization in order to make some semblance of order in a highly fragmented and largely subsidized region. Private firms were forbidden to buy grapes, giving exclusive buying rights only to the co-ops. The result was predictable, wines became highly standardized, homogeneous, and poorly made. In 1989, when Portugal was invited to join the EU, this heavy handed and poorly designed legislation was overturned, seen as being incompatible with EU regulations. The turning point for the region finally came in the 1990s, when private Dão wineries took the necessary steps to increase hygiene, modern winemaking techniques, effective bottling methods and an overarching desire to increase the quality of their wines.

We were reminded of the quiet, sweet winemaker, Pedro de Vasconcellos e Souza, who attended Vini Portugal’s tasting in Lisbon. He opened bottle after bottle of his Casa de Santar wines, eager for us to fall in love with them. As Ryan reminisced over the quality and distinctive characteristics of each wine, I simply recalled enjoying them. Nothing spectacular jumped out at me, but neither did anything offensive. What I do distinctly remember is how fixed my eyes were on Pedro’s immaculately starched shirt and pressed pants. When he poured each wine into the glass, he did so with such care and attention, as if he was handling a tiny little infant, hesitant that we would dislike it and not see its preciousness. He was amazing in the amount the care he gave his wines, but by the end of the day as I zipped from one producer to the next, his wines blended into the sea of producers I knew I liked but didn’t know why. Ryan, on the other hand, was sold on the wines and excited to taste them again to see if his first impressions were right.

Casa de Santar is one of several small boutique producers making a limited amount of quality wine under the umbrella company of, Dão Sul. Founded in 1989, Dão Sul is a partnership between four men who were passionate about Dão wines. A decade a so later, they expanded their vision to include the regions of Bairrada, Douro, Alentejo and Estremadura, adding Brazil only this year. Besides Casa de Santar, we’ve had the privilege of tasting several of Dão Sul wines including: Quinta de Cabriz and Quita dos Grilos; Quinta do Encontro from Bairrada; Quinta do Gradil from Estremadura, Quinta Sa da Baixo from the Douro; and Heredade Monte da Cal from the Alentejo. 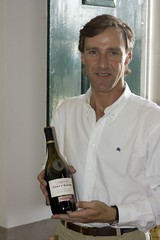 Built between the 17th and 18th Century, Casa de Santar is a manor house located in the heart of the Dão wine region, and more specifically in the province of Beira Alta, in the center of Portugal. Its surrounding vineyards were also said to be planted around the same time, established by written records documenting the very first grape planted. What that specific grape was is beyond me? Despite my searching, I couldn’t come up with the information. If we had to crack a guess at it, we’d probably go with a red varietal and most likely one of the three Casa de Santar is currently harvesting.

Casa de Santar wines are elaborated solely from the estate’s 100 hectares of vineyards planted with indigenous Portuguese red grape varieties. And through experimentation, they’ve found which red varietals thrive in the the granite-schist soils and varying Continental and Atlantic climates, such as Touriga Nacional, Alfrocheiro Preto and Tinta Roriz. This last variety, Tinta Roriz, is also known as Tempranillo in Spain and Aragones in the Portuguese Alentejo.