Today, for this month’s WBW, hosted by El Jefe of El Bloggo Torcido, Gabriella and I decided to invite all of our friends here in Iberia to offer their contribution to the topic of breakfast and wine. In Spain, at least a glass of wine is pretty traditional for breakfast. Hence, we invited our Catalan friend in Barcelona to tell us about his familiar experience; our writer, Justin Roberts, from Jerez to explain how sherry matches with traditional English fare; and finally, our friend Vitor Mendes from Portugal who chipped in with his two cents on rustic Portuguese fair.

As for us? Growing up, I remember how much fun we had when mom made breakfast foods for dinner, or when we had lazy Sundays where brunch didn’t make it to the table until well past noon. Either one was a treat, and though they were not paired with wine, today, with some years under our belts, we love to pair this type of cuisine with various wines.

So last night, Gabriella and I did a nice tapas style dinner of various breakfast foods, probably none of which is “traditional” from an American‘s perspective, but all of which are things we enjoy. First off, some refried beans with bacon (actually pancetta, but it’s still bacony good!), a treat I always had growing up for breakfast with a 1/2 Mexican mother. This was accompanied with toasted Catalan bread and tomato with good olive oil, our favorite adopted breakfast item. Two soft boiled eggs sat alongside, just to round out the breakfast “look”. And finally, a favorite of mine, but not so much of Gabriella’s, assorted tinned fish, including: sardines, tuna, and one unidentified fishy treat. Fish is pretty common for breakfast in most of the world, and I personally love the oily goodness with my toast!

With an eclectic meal, such as I just described, we most definitely had to pick a equally oddball wine. We chose the 1997 Viña Tondonia Rosado Crianza. For those of you who have not had a Tondonia wine, we urge you to rush out right now and get one. These are some of the most special wines Spain has to offer. No one makes wine like they do, and drinking a 12 year old rosé with this dish couldn’t have been more ideal, mainly due to the wine’s insane acidity and richness, which fills and coats your entire mouth. In the mouth, pure fruit mingles and dances with old cobweb filled with vanilla in the palate. I know this descriptions is full of contridictions, but so is the wine. Personally, it’s a match made in heaven, especially for the oily sardines, which I relished enjoying them together.

So now I hand over the breakfast reins to our friends and special contributors! Cheers,

Justin Roberts
Breakfast for 9? For 9pm that is… WBW #53 hosted by elbloggotorcido.com is all about breakfast. We were asked to steer clear of Sunday brunch, so I guess Champagne and Orange – that sort of thing. There is a list of wines not allowed, but this does not include fortifieds, so I hope sherry is going to be OK…

In my book, there is only one proper breakfast and that’s the “Full English” version. Normally, and traditionally, this is built around a foundation of bacon, egg and toast (or fried bread) and usually includes some or even all of the following: Bangers (pork sausages), baked beans, black pudding, grilled kidneys, steak, mushroom and grilled tomato. The eggs can come fried or scrambled. There are regional variations. I’ve had fried banana in East Africa – which pairs particularly well with bacon.

Not all the ingredients for a “Full English” are available in provincial Spanish towns, so I did have to improvise, but only slightly and I managed to produce a credible result. The Spanish don’t do anything like a banger, so I used Longaniza sausage instead and it worked very well. Spanish bacon does not cut it either, so mine came from Gibraltar, where they sell the real thing. I could not for the life of me find a can of Heinz Baked Beans (although I have seen them in Spanish shops before), so that was missing but otherwise all the other ingredients were bang on.

On my plate I had toast, fried egg, mushrooms, grilled tomato, steak, bacon and sausage.

Now, usually, a “Full English” comes with a steaming mug of strong, milky tea, but as I’m sure you’ve already guessed by now that this plate was paired with a copa of sherry. First I tried an old, and very good Palo Cortado, “Apostoles” by Gonzalez Byass, thinking its touch of sweetness would work well with salty bacon. This was not a success with the bacon or anything else on my “breakfast” plate. I moved onto a dry Amontillado by Valdivia, which went down well with everything. I’ll be sticking to the dry sherry with breakfast from now on… 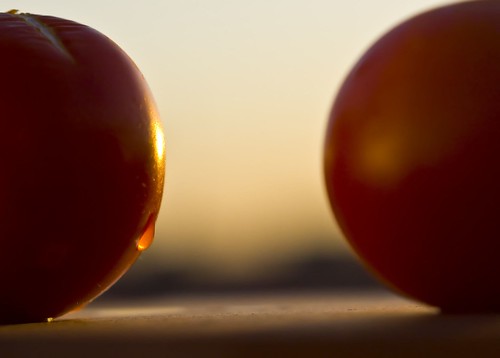 In Catalunya, there is a meal called “esmorzar de ganivet i forquilla“; which literally translates to “breakfast using a knife and a fork”, as opposed to finger foods such as croissants. A traditional Catalan breakfast dish would would consist of “cap i pota” – a stew made with the head and legs of a veal, but you have to be daring to start the day with that. Since I know my limits, when I have a heavy breakfast, I tend to stay to more classic “pa amb tomaquet” (bread and tomato) with jamón, cheese, a potato omelette, and on the very rare occasion, butifarra (catalan sausage), which is a more prudent approach to kick start a day. And as you imagine, I cannot see myself drinking a warm mug of English breakfast tea with milk and sugar with said fare. So instead, I marry it with a fresh young red, as it is a much healthier approach (hey, it is good for my heart!). I tend to enjoy young merlots or garnatxas, which are refreshing enough to welcome a warm, new day, while powerful enough to lubricate my guts after the “light” meal.

Here are my two suggestions:
In Douro region (Trás-os-Montes) it is typical to pair a local red Duriense wine like “Incantum” or “Fonte da Loba” with following breakfast items: 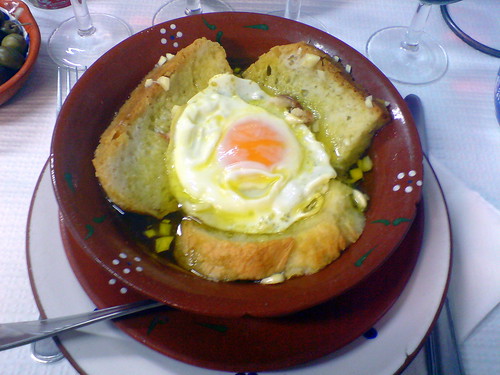 The other suggestion, also in the Trás-os-Montes and Douro region, as well as in the upper Minho region, is enjoy a breakfast soup called, “Ãgua de Unto” (Fat water). Although it is not as common anymore, you can still make it in the following way:
Use the pork fat called “Unto”, fried, and then mix it with boiled water garnished with salt and local herbs. Cook it down for awhile, and during this time, you can prepare a big bowl with a slice of rye bread for the soup to pour over. Sometimes they also add a boiled eggs “escalfados”. This is a very high caloric breakfast for the people who use to make the harvesting!
Douro wines would pair very well with this meal, or in the Minho, they might enjoy a nice Vinho Verde Tinto “Vinhão” from Quinta de Gomariz. This wine is full-bodied with high acidity and great tannins. Typically drunk from a clay bowl, the Vinhão has a red, almost purple color, with a vibrant foam. Remeber: If it can’t “paint” the bowl, then is not a good Verde Tinto!!! (Flickr photo by by Grumbler %-|)