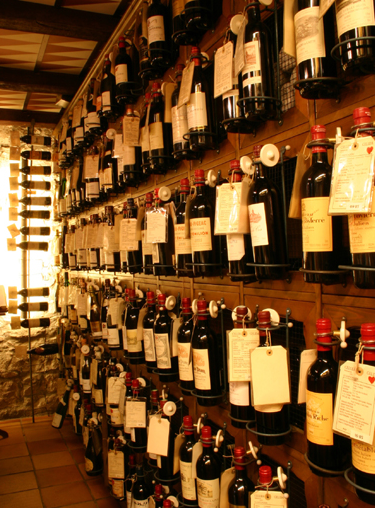 As a customer in a foreign wine shop, I believe that you can communicate your needs and wants using very basic gestures, in combination with contextual cues. But it is also my opinion that the true signature of a quality store is that the experience is effortless. The store is organized logically, the staff is attentive to my needs in a language I understand, and I walk away feeling that the store not only is fair but truly has passion for their product.

Located in the heart of Barcelona, Celler de Gelida almost reached my definition of excellence. Upon entering the store, I felt as if I walked into someone’s home who just so happened to have a few thousand bottles lying around for special occasions. Each bottle was clean, facing front and gently balanced upon century old shelves bowed from the liquid weight. The history that seeped into every nook and crevasse was only emphasized by the slightly dimmed lights casting shadows across brown tiled floor.

I liked the feeling. I enjoyed seeing the kitschy plastic grape vines hang from the corners of the ceiling accompanied by an array of painted porcelain Bacchus masks that somehow make the room look authentic and festive. It felt as if a grandmother thoughtfully hung every grape related gift they received at Christmas on the wall, over the counter and from the ceiling. With five generations passing on their trials and tribulations, successes and failures, it is no wonder their is a beautiful dichotomy displayed throughout the store between intimacy, tradition and vision.

The story begins in 1895, when Ton Falgueras first open the Cellar with only a handful of wines. Although the store grew, it reached a lagging point where Ton felt a decision needed to be made for the survival of his business: change or close shop. Unwilling to take the second option, he toured throughout Europe in search of an alternative. The key was variety and technology. By traveling the world, he quickly learned which international wines were worth stocking, what shrewed wine customers were looking for and how he needed to continually remain ahead of his competition through vision and experimentation. 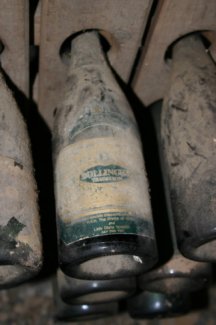 I could feel this vision while touring through the shop. I saw thousands of bottles touting from some of the greatest vintages and regions in the world, each adorned with an antique style label filled with every piece of wine geek information you could imagine. Casting your eyes to the bottom of the label, one of two shiny stickers may jump out at you. A brilliant green circle sticker indicates an impressive rating from one of the major wine rags, while a red heart speaks of the Celler de Gelida’s belief that the wine is a good value for the price.

But you won’t only find wine; they also carry over 400 different whiskeys, in addition to a wide variety of brandies, cognacs, liquors, dessert wines, vermouths, grappas and aquadentes. What they didn’t have, which saddened me, was an extensive variety of Portuguese table wine. While they only carried 9 different producers, primarily from the Douro region, they did stock well over 100 different Port wines including a 1900 Niepoort Colheita. I had high hopes for our friendly westerly neighbors, but no such luck. They also lacked healthy beer selection, which for all practical purposes isn’t the end of the world; it would have been to know of a good spot to pick halfway decent beer. They made up for it, however, with their floor to ceiling glass case filled with 1.5 oz. liquor bottles ranging from Grey Goose Vodka to Petron Tequila. Sure, it’s novelty piece, but if you’re interested it trying a unique whiskey but don’t want to pay the 50 Euros, it’s not a bad investment.

Over the course of the next twenty minutes, I chatted with the next in line to inherit Celler de Gelida. I’d share his name with you, but it occurred to me after leaving the store that we never had a formal introduction. What I can tell you is that his passion for wine and a desire to make Celler de Gelida a successful business venture was evident in every aspect of his being. Sharp and attractive he explained that the store was just a small bite in what they offered. Pointing across the street, he told me of Celler de Gelida’s pride a joy, a large stone wine museum reserved for wine tasting, events and special wines which need a little extra care. And because Celler Gelida is also a wine distributor, the same wines held in their wine museum, are also the wines they provide for prestigious restaurants like Ferran AdriÃƒÂ ‘s El Bulli.

Unfortunately, I didn’t have the privilege of seeing their wine museum, as a result of a major wine tasting being held by Meritxell Falgueras. Meritxell, one of the three Falgueras’ currently working at the celler, is worth mentioning because she is not only a Master Enologist, but also a Sommelier and a writer for several prominent wine magazines in Spain like Mi Vino. Consequently, her reputation has grown in Barcelona, forcing her to become more a circus performer, continually juggling her teaching with writing, consulting and traveling. 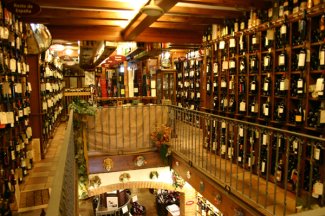 Overall, the store has an enormous amount going for it. The selection is impressive, the prices are reasonable and their reputation precedes them. Yet, despite their fame in Barcelona, we didn’t even know they existed. Why? I think a large reason why they remained hidden from us is a result of language. Despite their descriptive website, it’s only offered in Spanish, as are their wine courses, which may seem logical but if you’re shooting for an international base, you need to offer more than one language. Unfortunately, because my conversations at Celler de Gelida were also in Spanish, I have no idea how proficient the 7 staff members are in English. That said, despite language being their main issue, I do give the store a lot of credit for continually striving to become visionaries, incorporating an age old family business with new, modern marketing strategies.