Best Wines To Bring On A Spanish Sailing Holiday

Spanish wines are some of the rewarding in the world, whilst Spanish waters offers some of the best sailing in the Mediterranean. How about we combine the two? Our friends at Get Sailing recently asked Catavino to recommend a choice wine for three of their favourite destinations in Spain… 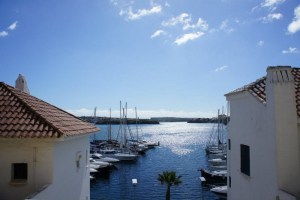 GS: Arguably our favourite of the three major Balearic Islands, Menorca is smaller and less touristic than Majorca and more peaceful than Ibiza – the renowned party island. One the one hand it has hardly any high rise developments and on the other it boasts more beaches than its more famous neighbouring islands combined, making it perfect for that relaxed sailing vacation. This being the Mediterranean, conditions are rarely too challenging and if all you have in mind for your hols is anchoring in secluded bays and a bit of snorkelling then this Balearic beauty is the one for you! Check out our guide to chartering a yacht in Menorca for more info. Now if only we knew what wine to bring with us?

Catavino: When we speak of tranquil evenings spent on a yacht staring up at the stars, a light bubbly white comes to mind, but our loyalty to place comes first. Whenever you travel to a new, exotic location, we highly suggest jumping off the boat and heading to your local wine retailer. Granted, depending on which island you’re frequenting, the choices may be sparse at best, but at least you’ll have the opportunity to explore a bit of the local terroir. In this case, you’re in luck, because the Balearic Islands are home to two D.O.-designated wine regions as well as several regionally-designated areas. Now, will these all be steller, maybe not, as most of the Spanish Isles are relatively new to the winemaking game, but that doesn’t mean you can’t find some fantastic bottles. The goal is to think native. Look for wines made with local grapes such as: Manto Negro, Callet, Moll (Prensal Blanc) and Fogoneu. This will at least give you a sense of place. Some intriguing wineries to seek out include: Bodegues Jaume Mesquida, Vinyes i Bodegues Miquel Oliver, 4 Kilos, An Negra Viticultors, Binigrau Vins i Vinyes and Bodegues Macìa Batle among many others! 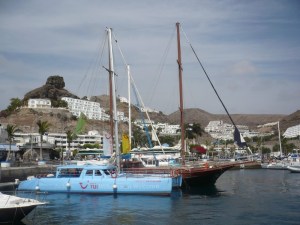 GS: Hold on to your hats, sailing in Spain’s Canary Islands can be a real challenge. This exotic archipelago of isles is actually much closer to Africa than the Iberian mainland and you won’t find much shelter here from the strong Atlantic winds. You’ll need to be an experienced sailor if you want to charter a yacht in the Canaries, however if you’re still a nautical novice you can of course hire a savvy skipper who knows the local waters. The rewards for being brave are large indeed. Apart from the amazing volcanic landscapes of the likes of Tenerife, Lanzarote and Fuerteventura, you’ll also get the chance to see dolphins, whales and sea turtles… or even go deep sea diving and check out some shipwrecks. The Canary Islands are also the best bet for winter sailing, as the equatorial climate means mild sunny days more often than not.

Catavino: Technically, this archipelago is a region of Spain, but geographically, one only needs to look at a map to see it’s very much a part of Africa. Located approximately 60 miles off the coast of Morocco, the island is reminiscent of Etna, where stunning vineyards cast a striking contrast to the extraterrestrial volcanic landscape. Granted, not all the vineyards are as dramatic across the isles of Tenerife, Fuerteventura, Gran Canaria, Lanzarote, La Palma, La Gomera, El Hierro, La Graciosa, Alegranza, Isla de Lobos, Montaña Clara, Roque del Este and Roque del Oeste, but each are wildly unique. Here you can find a plethora of wines made from a wide variety of grapes including: Baboso Blanco, Bastardo Blanco, Bremajuela, Breval, Bujariego, Burra Blanca, Diego, Forastera, Gual, Listán Blanco (Palomino), Malvasía, Marmajuelo, Sabro, and Vijariego Blanco; and as for reds: Almuñeco or Listán Negro, Baboso Negro, Bastardo Negro, Castellana, Listán Negro, Listán Prieto, Malvasía Rosada, Malvasía Negra, Negramoll, Tintilla, Verijadiego Negro, and Vijariego, among others. Some wineries to look out for include: Bodegas Juan Matias Torres Perez, Fronton de Oro,  Vinos Tendal, Bodegas los Bermejos and Bodegas Dominguez, to name a few. 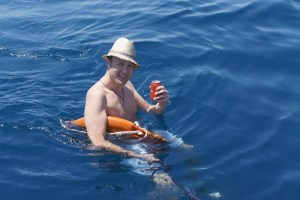 GS: The “Wild Coast” is so called because of its craggy coastline, and if it’s dramatic windswept cliffs with fishing villages and hidden beaches you’re after then fly to Girona or Barcelona, hire a boat and set sail. A good focus point to head to is the Cap de Creus national park, where you’ll find some lovely anchorages amongst the rocks. You can also call by Cadaques, one of the most beautiful holiday resorts on the coast and a favourite with Pablo Picasso (whilst Dali also lived close by!). Consult our guide for more info on hiring a boat and sailing along the Costa Brava.

Catavino: Costa Brava, an area that screams both beauty and adventure. Between the bustling international city of Barcelona, and the calm turquoise waters to the north, one can easily understand why a day anchored at shore with a cooler filled with gorgeous wine sounds appealing – and they wouldn’t be wrong. Along the white-knuckled coastline, famous to any driver who has taken the heart-stopping high road along the Costa Brava, you will find loads of fantastic vineyards not only worthy of exploring by foot, but also via bottle. Of keen interest, we suggest DO Emporda. Red wines from this area are generally made from Samsó (also known as Carignan or Carinyena) and Garnacha Tinto (known in this region as Lledoner, and more broadly in Catalunya as Garnatxa Tinta). But like most regions in Iberia, the D.O. has allowed new world varieties such as Cabernet Sauvignon, Cabernet Franc, Merlot and Syrah, as well as traditional Spanish grapes, such as Tempranillo, Monastrell and Garnacha Peluda. Whites are generally made with Garnacha Blanca, Muscat, and Macabeo and Xarel.lo (2 of the 3 traditional Cava grapes), in addition to Chardonnay, Sauvignon Blanc and Gewurztraminer. Some wineries worthy of exploring include: Perelada, La Vinyeta, Cellar Martin Faixo and Roig Parals.

Editor of Barcelona-life.com and founder and editor of Urban Travel Blog. Originally from the UK, Duncan is well versed in the art of travel, taking his insatiable curiosity on the road, and exploring the back alleys to encounter life's hidden treasures. Although he writes primarily for the web, Duncan also pens regular features for Ryanair Mag, Easyjet Magazine and CNN Traveller.