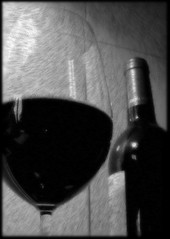 It was about 6 months ago when we had a somewhat lively debate here at Catavino regarding the merit of having numerous wine competitions around the world. I had posted the results of the International Wine Challenge as proof that Spain was producing quality wine; but after a reader pointed out the bias in so many of these competitions, I quickly posted an explanation as to why I thought there could be some merit to the Spanish wines showing so well. Since then, I have seen an incredible amount of awards brandished about by wineries that have won a gold medal or a ribbon at the latest tasting event. Therefore, it was interesting when I saw the following two prizes mentioned on the Wines of Spain website:
Two Spanish wineries Take the top prize at the “Chardonnay du Monde” Competition
and
Spanish organic wines triumph at Biofach 2006
At first, I dismissed them as frivolous awards lacking both meaning and significance. To me, these two shows have a common goal to give awards to people that normally wouldn’t win them. Kind of the school house rule of “everyone is a winner” or no one wins at all. However, once I took my assumptions and placed them on the side burner for a minute, I realized that there is another side to this debate. Take the Biofach award as described on the Wines of Spain website:

In total 777 wines made from organic grapes competed (72% more than the previous year) from leading producer countries such as Spain, Italy, France, Argentina, Chile, Germany, Greece, Turkey and Hungary, among others. The wines were evaluated by a panel composed of 30 expert tasters, oenologists and winemakers from Germany, Italy and Switzerland. The prize categories were red wine, red wine with barrel contact, white wine, rosé and sparkling wine.

Granted, it’s not every organic wine in the world, but it’s a decent amount to compete against. Additionally, there is a focus on a specific type of wine to be judged rather than including everything under the category of “wine”. When we include any and all wines, I find that we lose the entire point of having a competition in the first place. Taste an apple next to an apple, but don’t taste an apple next to a cucumber and expect a fair competition.

The goal of this international Chardonnay competition is to reward the best wines on the basis of their intrinsic quality.

This year, 936 wines samples from 37 countries were tasted. The judges tasted in accordance with the international Wine competition standard and they strictly followed Quality Assurance procedures.

As part of these Quality Assurance procedures, the organizers offered a one-day training session for the judges, during which the sensory profile of each judge was determined and Chardonnay aromas were identified. The judges were also familiarised with methods for international wine judging.

To round this out there are 4 levels of awards with awards going as follows:

Notice that no Medals of Excellence were awarded? That says to me that the motive is not so much finding the perfect wine than evaluating the wines that are presented. In my opinion, that is a step in the right direction. What if next year [Wine Spectator->http://www.winespectator.com] refused to award a #1 wine of the year? Interesting idea, though I doubt they would go for it. For them, it’s all about saying one wine is better than another no matter what, and sadly, most of these competitions tend to hold to the same criteria. On the other hand, if you are going to give out awards, at least follow some of the same guidelines as the contests mentioned above by narrowing down your criteria in order to help wine makers and consumers make better decisions.

One commonly held fear, that I’m sure will be brought up when I post this, is the “internationalization of wine flavors” that seems to be the mantra for Wine terrorists, best exhibited in the movie MondoVino. People will defend their solidly held belief that these contests help to promote the “international” style. While I agree in part with this idea, let us break down this theory a bit. Even if you like to make your wine in a way that is not considered “international”, does that mean you can’t still try to make it a better wine? I’m as sick of people saying that they don’t like “international” styled wines under the pretense that “wine must not be good if I can easily understand it”. I’m pretty sure that the medal winners did not all taste the same in the afore mentioned contests; and I’m also willing to bet that even if you poured the top wines for a group of wine experts, their results would be mixed.

Tasting is subjective. It reminds me of a bodega I was at last month for whose name I will keep to myself only because I have nothing good to say about the wines themselves. The winemaker seemed shocked when I suggested that they were oxidized, defending his wines by saying that they simply expressed the terroir and were not easy to understand. In the end, the wine was just bad. Poor wine making should not be allowed to pull the terroir card from its sleeve.

My point is this, if I had to choose, I’d eliminate many of the “best wine in the universe” tastings, and instead, break it down into a thousand side by sides with wines that can really be judged both fairly and accurately. Judging is subjective but it can still be beneficial.