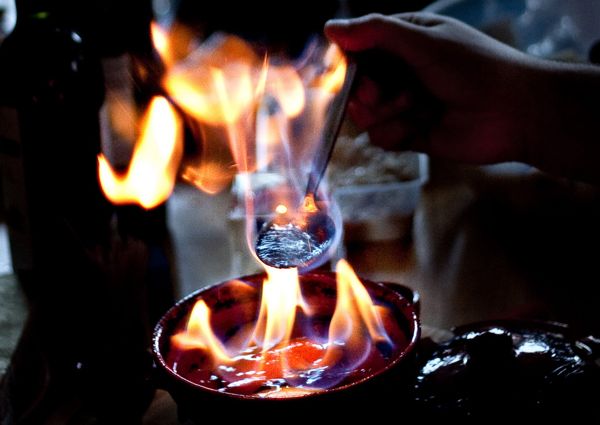 Very recently, I discussed the importance of “coziness” in my life, and how wine plays a key role in facilitating that warm and inviting atmosphere. However, wine isn’t the only substance that creates such an experience; there is also Aguardiente de Orujo.

Orujo, also known as augardente or caña in Galician, is a transparent liquor acquired by distilling the pomace of the grape, also known as Grappa in Italy. Pomace is the residual material obtained after crushing the grapes – consisting of seeds, skins and stalks – which is then fermented in closed vats and distilled in alambiques, alquitaras or potas (large copper kettles) that are heated over an open fire for a minimum of 6 hours. Today, there are approximately 80 commercial producers of orujo within La Denominación Específica Orujo de Galicia, (Denomination Orujo of Galicia), which was originally formed in 1989.

Granted, I’m not much of a straight spirits fan, preferring gin and tonics on warm summer nights or the occasional hot toddy when temperatures drop below zero, but there is something to be said for a liquor accompanied by a pagan spell. I’m guessing very few of you speak of “the filthy hair of an ill-begotten goat” before you sip on your Rob Roy, but in the north of Spain, this incantation is very prominent tradition. (Flickr photo by David Hegarty)

The Queimada is a traditional ritual, practiced by the people of Galicia, located in the upper northwest corner of Spain, propped comfortably over Portugal, to cast out demons and bad spirits through an incantation and a witches brew made of Orujo. The origins of the ritual are still unknown, though competing theories predict that it was either a remnant of the Celtic tribes that settled in Spain in the 11th century who worshiped polytheism or developed in the 1950s when Tito Freire designated the clay pot in which the Queimada is prepared. The accompanying spell was written by Mariano Marcos Abalo in the 1960s.

I’ve experienced the Queimada twice, and on both occasions, my imagination conjured unsettling spirits sweeping overhead, the fog swirling mysteriously under my feet, and the druids, witches and warlocks gathering in preparation for battle against the forces of evil. But then again, when standing in a 14th century church in Santiago de Compostela as thunder cracks overhead, sending violent reverberations throughout the vast halls filled with flickering flames from the burning brew, one can’t help but let their imagination run wild.

“With this bellows I will pump, the flames of this fire which looks like that from Hell, and witches will flee, straddling their brooms, going to bathe in the beach of the thick sands. Hear! Hear the roars of those that cannot stop burning in the firewater, becoming so purified. And when this beverage goes down our throats, we will get free of the evil of our soul and of any charm. Forces of air, earth, sea and fire, to you I make this call: if it’s true that you have more power than people, here and now, make the spirits of the friends who are outside, take part with us in this Queimada.”

The Queimada was initially prepared by groups of Galician emigrants, typically after fellowship lunches and other group events, who prepared theatrical revivals of old beliefs. Today, very little has changed. The Queimada is performed at parties, after family events, or in the dead of night when the evening calls for eccentricities and adventure. The most popular time of the year that you may experience a Queimada is on Samhain, the Celtic New Year‘s Eve or during the Summer Solstice on the 23rd of June.

The drink is prepared in a clay pot, or cauldron, that has been sealed or glazed on the interior, meant to represent Mother Earth. The aguardiente de orjuo represents the tears of Mother Nature, and eventually mixed with coffee, sugar, lemon peel and coffee beans.

Once the spell begins from the lips of the druid priest, the flame is ignited over the cauldron and the alcohol begins to burn, representing light. As the flames flicker from the a wooden ladle plunges into the bottom of the pot and sours back into the air, as a long stream cascades blue liquid light back into the bubbling brew. When the spell eventually comes to hushed finale, a lid is placed over the flames, leaving a steaming hot drink that is poured into small clay cups and passed among friends.

Now, is this the traditional sense of “cozy”? Not as necessarily, but there is something truly magical and warm about the experience, especially when shared among friends.

So this holiday season, when you’re feeling a need to cast out evil spirits brought about by unnecessary stress, or simply want a fun party trick to share under the moonlit stars, why not host your own Queimada?! And even if conjuring up witches and trolls is not your particular forte, this delicious warm drink that’s easy to share among large groups is the ideal way to warm the fingers and toes when the wind blows fiercely and the temperature drop below freezing.

I’ve included both a video about the Queimada (in Spanish) as well as a recipe below, but feel free to alter it as your taste buds require.

First and foremost, please be very careful when preparing the queimada, as we’d love to keep you alive and kicking for the holidays. Therefore, you’ll need to seek out a large clay pot, or a fireproof bowl, that’s been sealed or glazed on the interior. You’ll also need to acquire a very very long wooden spoon to stir the brew while reciting the spell, unless your desire your William Sonoma spoon to become a pile of waxy goo.

Place the clay pot or bowl on a fireproof surface

Place the clay pot or bowl on a fireproof table of atop a cold BBQ grill. Be sure to have a large lid handy to put out the flames.

Pour approximately 4 Tbsp orujo and 1 Tbsp sugar into a small glass and stir to dissolve sugar, then set aside.

Pour the rest of the orujo and remaining sugar into the clay bowl and stir. Add the lemon peel and coffee beans and stir again.

Pour the orujo and sugar mixture from the glass into a ladle and light it on fire. Carefully move the ladle very close to the clay pot until the orujo mixture in the pot catches fire. Stir frequently until the flames turn blue. Slide the lid over the pot to put out the flames. Serve hot.