Rovellones: “Golden Fungus of the Gods” 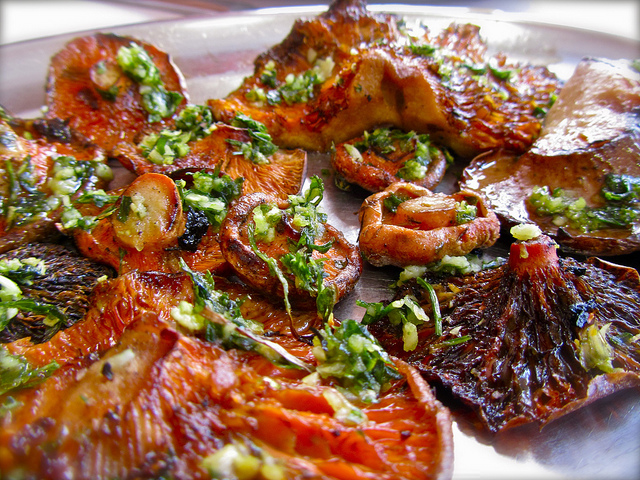 I often joke that I live in Spain exclusively for its cured Jamon. It is one of the few things that is truly singular to Spain. Granted, you can now buy it in London, and in limited qualities in the USA, among other countries; but in truth, it is only at its best when fresh and served from the rafters of a smokey bar in the side streets of Spain. Jamon Iberico de Bellota is a priceless experience, but there just might be one more Spanish delicacy you can add to the list: Spanish mushrooms!

Now, I know that other countries have their unique mushrooms, and if I lived elsewhere, I would most likely argue their greatness as well. Having grown up in Minnesota, eating morels and puffballs from my grandparent’s farm, these perfect fungi bring up sweet gastronomic memories that perpetually paint smile on my face; but it is here in Spain where the fever for the “shroom” is unmatched. In the spring and fall, brightly colored signs are tacked onto every wall throughout Catalunya announcing classes to learn how to harvest mushrooms safely. Mushrooms are so heralded that in any bar, or restaurant, you can always find people willing to regale you with tricks on how to garner the most authentic and abundant mushroom experience.

On one of our first hikes up la Mola, a mountain located not 5 miles behind our house, we were greeted by kids skipping through the forest, a la little red riding hood, with baskets in hand collecting all the fungi that sat invisibly among us. Like a strange Tim Burton induced dream, children scavenged in the undergrowth looking for Rovellones (or Robellones in Catalan), Caps de Mort, and the coveted, and elusive, Cep. This was our very first introduction to Catalunya, and one we considered as a very good omen!

Last week, we rented a car and headed north to visit a goat cheese maker near the French border. And per his suggestion, we continued northwest after our visit, until we stumbled upon Castellar de n’Hug, a tiny pueblo located in the province of the Berguedà. Ravished for food, we strolled the perfectly uniformed town studying restaurant after restaurant with signs declaring “Hay Rovellones” or “We have the Golden Fungus of the Gods”, as I like to translate it.

We mutually agreed to push our way into the most crowded bar in town called Hostel La Montanya, and were immediately escorted upstairs, where just a few souls were enjoying their lunches. Stomachs growling, we wasted no time ordering our food, which promptly included a plate of Rovellones, something which was not on the menu. The waiter, upon seeing two foreigners, gave us the double take and confirmed our order with a sly smile and a quick comment that they had been collected just the day before on his day off, among the trees visible from this mountain top town.

When the Rovellones finally arrived, each a flat-ribbed button of earthy brown with a healthy sprinkle of garlic and parsley on top, we knew we had done well. While the garlic was powerful, the flavor could never overwhelm the mushroom’s earthy, meaty character. As is expected, pine needles still clung to a few, indicating freshness, but not necessarily quality. It wasn’t until we took our very first bite that our eyes rolled backwards in love. These are meaty little buggers with a firm resistance that gives way to pure forest floor flavors.

The good news for us is that the 2010 fall harvest should show a good abundance of mushroom treats. The Centro Tecnológico Forestal de Cataluña has declared a harvest of 55 – 70 kilos of fungus per hectare this autumn; and while they can’t say which types will prosper, with any certainty, they can say that September and October rains can cause the harvest of Rovellones to be higher than usual. Granted, it may not be what the vinegrowers are hoping for, but the rest of us will not mind a smidge more rain if it means a few more bites from these forest floor morsels. We can only hope that this week’s rainstorms are harbingers of earthly delights to come.

Mind you, it is far from a science when dealing with wild harvests like we have with Rovellones and other mushrooms of the region. So many factors effect the outcome, that those who do go hunting for mythological treasures have found that nature’s Easter Egg hunt may not always pay off. But, for those of you that do come to Spain from September to November and March to April you are in luck. Primarily, because there are considerably less tourists, and secondarily, the mushrooms will be here!

In short, order them, but remember that they aren’t cheap. Considering that we came during the first week of the harvest, a small plate with about 4 big (2inch) Rovellones and another 10-15 small ones ran us 18euros, more than my pigs feet (who knew!) or Gabriella’s trout, but worth every cent. Happy hunting!