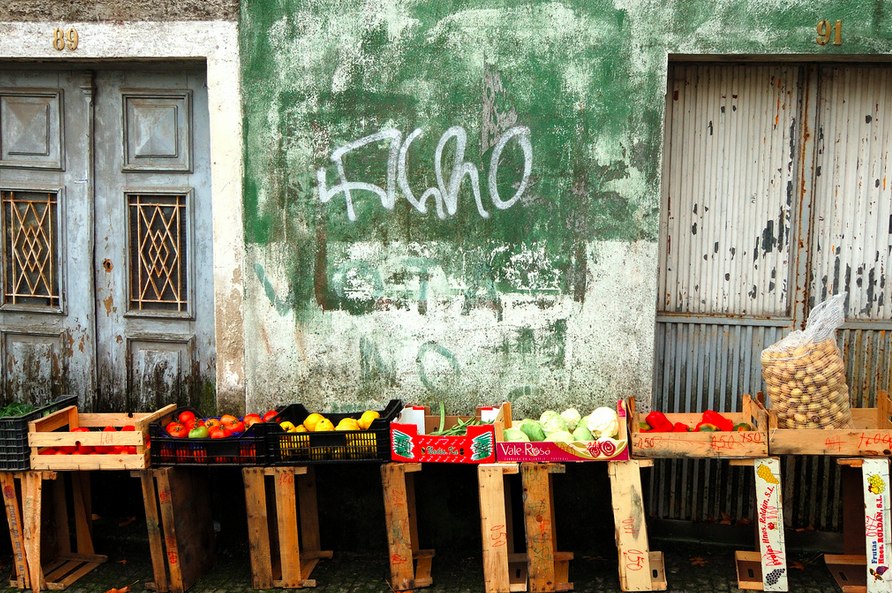 As the hottest months quickly approach, I begin to feel the spellbinding sluggishness of a sultry summer day creep up on me. I want nothing more than to lounge around on the weekend, with very little fuss or muss about anything—including cooking. For as much as I enjoy hanging around the kitchen, this time of year, I turn to quick and easy salads. However, any old salad with your standard store-bought dressing won’t do! I can give up my robust Portuguese roasts and hearty stews when the days get warmer, but I still want lots of flavor in my easy salads to stand up to a good glass of wine. Bet you do too. So, thought I would share three of my favorite salads, all inspired in traditional Portuguese dishes. Easy breezy!

In Portugal, sardines reign supreme during the summer. They’re a staple at every street festival and a reason to throw a party at home. Ever been to a “sardinhada,” it’s a sardine party! With this flavorful fish in mind, I decided to create a sardine dressing. If anchovies can do it, why not sardines.

Wash the lettuce and set aside in a large bowl. In a food processor (or blender), add the sardines, the onion, vinegar, parsley and black pepper. Mix it and add the olive oil in increments. Once it’s all blended, check to see if it’s the consistency you want. If it’s too thick, add a little more vinegar or even very little drops of water and mix again. Note: chances are when the dressing hits the damp lettuce, it’ll moisten up, so keep that in mind before adding too additional liquid. Cover your torn lettuce leaves with the dressing and enjoy! Tip: If you add less liquid to create a thicker dressing, you can serve it as a dip.

One of my favorite “salads” growing up was the “Salada Russa.” Not quite a salad given the amounts of mayonnaise used in this dish; it’s a real treat when you’re NOT counting calories. As the name suggests, it’s not a Portuguese invention but rather a Russian creation by Lucien Olivier. However, many European countries have their own versions, and the one I grew up with had canned tuna fish in it. In the summer, I deconstructed the old “Salada Russa com Atum” and lightened it up with vinaigrette. Portuguese canned tuna is one of my vices—I could practically live on this stuff. But I digress …

Preparation:
Traditionally, all of the veggies in this dish are boiled. Since it’s summer, I like to freshen things up a bit by steaming and even keeping the ingredients raw where it makes sense. In this dish, I steam the string beans until they’re fork tender (I don’t use potatoes as is traditionally called for, it’s a salad after all, the string beans are more than enough if light/easy is what you’re going for). Boil the egg. In the meantime, add the olive oil, mayo, vinegar to a large bowl. Whisk until the mixture thickens. Shred the raw carrot and set aside. Once the egg is boiled, and the string beans steamed, begin to assemble the salad. There’s no real rhyme or reason here, but I like to put my string beans at the bottom, followed by the sliced tomatoes, the tuna, the sliced egg and shredded carrot. I cover it all with the vinaigrette, add the pepper and mix it. Done!

If flavor is what you’re looking for, there’s hardly anything more flavorful than garlic, right. The Portuguese dish of “Camarao a Guilho” is loaded up with garlic, so why not create a tasty salad dressing that mirrors these long-lasting flavors (need a mint kinda long-lasting).

Preparation:
Start by putting the whole tomatoes with a sprinkle of salt under the broiler (or wrapped in foil on a grill). In a food processor, add the garlic cloves, the “Piri-Piri,” the Paprika, the parsley and lemon juice. Mix it until it’s smooth and let sit. Meanwhile, add the shrimp to the broiler (or grill) until both sides are pinkish (about 8 minutes). Add the grilled tomatoes to the food processor as well as the olive oil in increments. Note: If the dressing is too acidic, add a sprinkle of sugar to taste. For a thicker dressing, you can also add a few drops of light cream. Once the consistency and taste is to your liking, drizzle it over the Arugula, which I like to use because of its peppery taste, it marries really well with the garlicky flavors. Then add your shrimp and you’re ready to go!

Cheers to a relaxing summer.