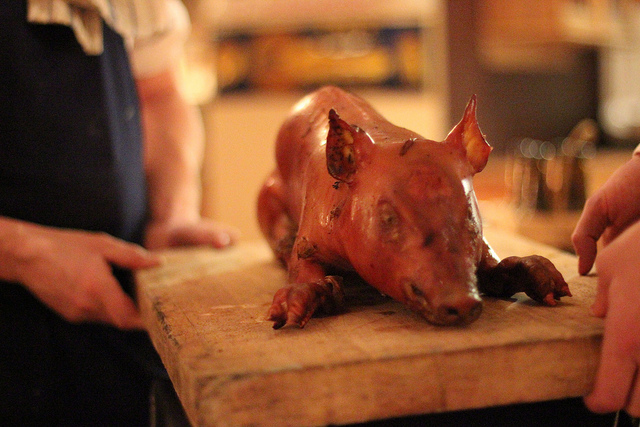 Editor’s Note:  Loosely based on my parent’s honeymoon back in 1969, I couldn’t resist adding a modern spin for the holiday.

It’s Valentine’s Day in Madrid, and you’ve got everything for that day completely set. You’re not like those other guys who think a bouquet of roses and the whisperings of a few sweet nothings in your girl’s ear will woo her into submission. Oh no, you’re suave, sexy, Latino in style and have concocted a master plan to have her swooning by the end of the evening. Silk pinstripe shirt, check. Perfectly ironed slacks, done. Enough cologne to suffocate an entire pueblo, yeah baby. Bring it on!

Looking at yourself in the mirror, giving that sly wink followed by a mimicked shot of a pistol with your index finger, what woman couldn’t resist you, especially when this vacation has been going so beautifully. What could possibly go wrong today?

Morning: Wooden tray donned with a red napkin, a steaming hot cortado, freshly squeezed orange juice and a perfectly gooey chocolate croissant purchased at the bakery up the street. 1 white rose sits in a wee vase with a note hanging with a silk cord from the stem reading:

“Honey, you are my universe, my heart, my soul. You make the heavens separate when I look into your eyes and I will forever be indebted to the gods for putting you in my path. Forever yours, Tony”

She cries, you kiss her sweetly on the lips, and she savors her morning breakfast.

Getting ready for the second half of your day, she walks into the bathroom singing “Alejandro”, before jumping in and out of the shower in ready anticipation of the day. Trying out a few other Gaga moves in the mirror, she relents and walks over to her suitcase to pull out a hairdryer the size of a small VW. Gigantic, yes, but she loves it and that’s all that matters. Plugging it into the wall, sans converter, sparks fly and she screams bloody murder.

After a slight sizzling sound, you both realize that she’s not only blown the fuse in your room, but upon further inspection in the hallway, she’s blown the entire hotel. Hair wet, girlfriend embarrassed and pissed, you salvage the morning by getting her dressed in the dark and shuffling her out the door.

Afternoon: Despite only knowing this girl for the better part of six months, you were convinced that she’d love the traditional sport. An avid fan of Tarantino films and animals, bullfighting was clearly the perfect mix.

Smiling at you sweetly, she pins up her hair back that had finally dried into a nice frizzy look: something between a Poodle and a Pomeranian, and you kiss her cheek. Noticing that the eyeliner over the right eye draws up to her hairline, you opt to remain silent. Despite her valiant attempt to apply her makeup in route to the arena on the city bus, she looks like a drunk clown, but hey, you give her points for style.

The fight begins, you order a few beers in celebration and feel the energy ramp up in the arena. You’re excited, but strangely not as much as she is. Jumping up and down, she screams at the matador like a diehard Notredame fan. “Dance right, right!! Honey, why aren’t they listening to me?! I said, dance right!” Sort of proud, and yet slightly revolted, you take another gulp while appreciating the eclectic people watching.

By the time the fight is over, you had sweat through your fabulous pinstripe shirt and your vision had degraded to slightly cross-eyed.  Maybe that twelfth beer wasn’t such a fabulous idea, but how were you supposed to know that bullfighting was clearly not your thing. The bull tried so hard to flight with valor, and though you tried to act all macho rooting for the matador, it was the bull you truly wanted to win. Maybe Valentines and gore wasn’t exactly your cup of tea, but she, on the other hand, looked vibrant, alive and absolutely stunning. Could the beer have anything to do with it? Nah, you resolve wobbling into taxi in route to dinner, she truly is stunning.

The Evening: You arrive at a quaint restaurant located on the second floor of the Plaza Mayor. Tiled walls and handcrafted wooden tables adorn the restaurant as you both sit with hands crossed. Minutes turn into a half and hour, and despite numerous warnings that Spanish service can take a lifetime, your patience is running thin. And just as you’re about to stand up and play the chivalrous boyfriend, a dapper man dressed in perfectly starched apparel arrives at your table with two menus, “Español o Ingles?”

“English please, but we already know what we want. We’ll take the suckling pig and a bottle of red.” Nodding slightly, the waiter walks away.

Cocking her head slightly, she draws back her hair into a half ponytail and asks, “what’s suckling pig?”

“You’ll love it! It comes with all sort of great stuff too. I read about it in a travel book.”

Feeling very proud you take a sip of wine and comment, “Mmmm, this has a very nice full body,” glancing at her teasingly, “just like you.”

Smirking slightly, she sees a waiter roll the suckling pig on metal trolly towards as her, before turning and stopping it parallel to the table. “Your cochinillo señor.”

Eyes wide, jaw to the ground, she stares at you in terror, “That’s the entire baby pig?! With a snout! What did you order?”

Turning toward the suckling pig, as the waiter turns headed toward the kitchen, you picked up his knife and fork and just before digging into the crispy meat and crack a joke about eating “Wilbur” when the suckling pig suddenly flew off the table and across the restaurant.

“I barely touched it?!” he cried, as they watch fellow patrons stand up in fear of a loose animal running across the room.

The waiter having noticed the commotion runs over to the table and sees the pig gone. “Señor, where is your pig?”

“What do you mean it ran off the table,” the waiter replied waving his hands in the air, ” It’s cooked. It can’t run Señor.”

“I know it can’t run, but it’s gone. Can we please just get another pig, please? It’s Valentines day for God’s sake!”

With his hands firmly planted on his hips, the waiter rolls his eyes before walking back into the kitchen, passing his waiter posse still on the hunt for the missing pig.

“Honey,” she asks in a gentle tone, “…maybe we should just go get a McDonalds somewhere.”

“No,” he snaps. “This is Valentines Day in Spain and it’s our vacation. We’re having sucking pig!”

Sitting back in her chair, they drink in silence until the second pig finally arrives.

“I señor, will cut the pig,” declares the waiter as he reaches for a plate. With his left arm raised, plate in hand, the waiter slams the side of a plate down through the middle of the body and along each limb. In all of 10 seconds, the body was severed into 8 perfect sections.

You turn just in time to see your girlfriend passed out in her chair overwhelmed by yet another horror scene. Defeated and exhausted, you grab the bottle off the table and walks out of the restaurant, vowing never ever to order suckling pig again.