Cutting to the Bone: The cultural nuances of butchering meat 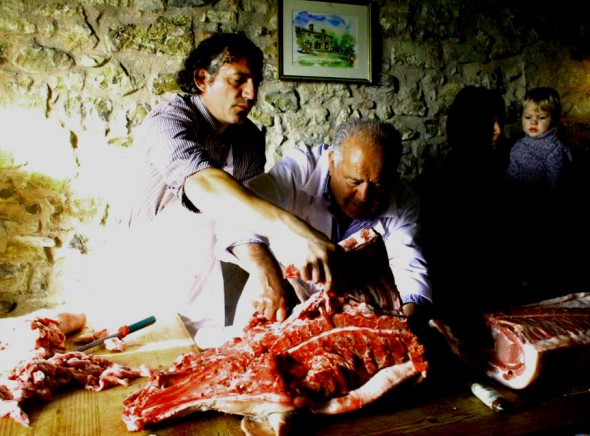 It’s 7:30 am, the mist is rolling off the breathtaking Umbrian countryside, and the sun is breaking through the leaves. I sip on my cappuccino and stare at the enormous carcass of a 400lb pig and wonder, how are we going to butcher this enormous beast? We’re staying at a beautiful country inn, just 5km from the border with Umbria, and our mission is to help Giugliano, our charismatic host, in the Spezzatura di Maiale, or as we call it, Butchering the Pig. Our group consists of 15 adults and 8 kids, none of us with butchering experience, but we all love food and everything that goes with it. So, here we all are, bright and early, now coming to terms with the enormous task we’re about to undertake. The air is filled with hesitation. Some of us choose to cut, some of us just watch. I have chosen to cut, to immerse myself in this age old tradition and to go back in time, even if it is just for the afternoon.

Eleven years ago, I moved to Barcelona, Spain, thinking I would work as an art historian. I spent many years in the kitchen with my family, but never believed that I, personally, would choose this as a career path. Then one day, when walking past a window of a cooking class, I decided to dive in and take a few myself. That one split second decision turned into two years of schooling at Escuela de Cocina Hofmann, and I have never been happier. That said, despite being taught how to butcher primal cuts, we were never confronted with an entire animal carcass other than an already plucked chicken or skinned rabbit. Hence, I wondered if I feel overwhelmed seeing the entire pig, and how I would react when we started to surgically and methodically chopping it to pieces? Was I going to get queasy? Would I tear up? Would I do the unthinkable and toss my cookies?

Prior to my move to Spain, I shopped at your average American supermarket, where everything was nicely cleaned and vacuum packed; but unless you read the label, the “meat” could be anything but animal. Hence, you can imagine my first stroll through the Boqueria market off the famed La Rambla seeing skinned carcasses of goats and rabbits. It was shocking. They had eyes. Eyes!!!! But, as the years went on, I adapted and actually appreciated seeing the entire animal, instead of quietly ignoring the fact that yes, they had been living only a few days ago. It gave me a greater respect for what you are putting into your mouth. That said, I had never seen an entire carcass of a pig before to this weekend, and I was starting to doubt my newly found stomach of steel.

Yet here we are, excited to start “unwrapping” our huge gift, like little kids at Christmas. I honestly can say that I didn’t hesitate at all, not when we cut up the lard, nor when we took off the skin. Even the kids were in on the action, helping us sort the lean parts from the fat. I was incredibly proud of them, as most of us don’t understand where our food really comes from, or what it came from, typically presented prepackaged food on clean supermarket shelves. But bravely they stood, ranging from 1- 17 years, pitching in in their own way.

I personally feel like I gained a new perspective, something I’ve been longing to do for quite a while. I learned what it’s really like to work hard for your food – separating the cuts of meat for today versus those stored for the long cold winter ahead. This gave meaning to the task, and shed light on how important food is, not just running to the market to pick up what you need. Many people still can’t afford that luxury, and 100 years ago, the majority couldn’t either.

Giugliano is a truly amazing guide, his passion for what he does shined through as he showed us how to cut, which parts he was preparing for curing and aging, such as the guanciale (cheek), pancetta (bacon), and the prosciutto (thighs). He put them in large plastic containers, and added a heaping amount of salt and pepper, and then laid out in the back to be air dried. In the kitchen behind us, he had already sent the pieces to be cooked for our breakfast, which included the ribs, loin with some belly fat attached and most of the entrails. After about 2 hours, we sat down like old-school farmers and opened up a few bottles of a nice, light bodied red wine (this is breakfast, no room for full bodied now!) and hungrily gobbled up our bounty. Ribs, liver skewers and Porchetta. Porchetta, a specialty from Lazio, has a slight variation here in Umbria. Typically made from the loin with some bacon and skin still attached, it’s roasted with herbs and spices; here it’s stuffed with chopped entrails and mixed with lard, garlic, salt, and plenty of black pepper and wild fennel.

After breakfast we continued to cut, making pork crackling, an incredibly time consuming process, as well as sausage. We prepared two different types of sausages, one with the lean cuts, another with the less desirable cuts and some offal. The pig’s calf was reserved for dinner, called Stinco, while the thigh was used for prosciutto. The livers were wrapped with the netting that surrounds the kidneys – helping to retain moisture – and sprinkled with spices. We then sliced up the Capocollo, basically the neck and back, and braised it with onions and vinegar.

I began noticing a huge difference between Italy and the Iberian Peninsula. One that really struck me was that the carcass had been completely drained of blood. In Spain and Portugal, blood is used to make a variety of sausages and dishes. Here, it was blatantly absent, and I later found out that about 40 years ago, Italy regulated the use of blood because of sanitary purposes. The pig has to be drained at the slaughterhouse and the blood is then given to a company for zoo-technical uses – essentially to make feed for other animals. In Spain and Portugal, pigs trotters are a specialty, while in Italy, they empty out the trotters, using the gelatinous bones and meat for animal feed. But, they then re-fill the trotters with ground fat and skin and some less desirable cuts of meat, then cook and eat it for Christmas. You can find this dish called, “Zampone” or “Cotechino”.

What’s interesting is that no matter how small the nuance between the Iberian and Italian way of butchering, the difference becomes noticeably larger when you think of how we use the pig in the United States. In the USA, there are many parts that just now are becoming popular, but certainly it is a very small part of the population that actually consume snout, trotters, ears or offal. We prefer the leaner cuts; ribs, loin, chops. The rest is mostly relegated to making ground pork or sausages. Here in Europe, I am amazed how every single bit of the beast is used, to make ham, salami, soups, stews….each part has its place in the wide and varied culinary heritage of each country.

Later in the evening, I sat down with Giugliano to glean some of his vast knowledge for myself. Listening to him talk about his life, and why he’s chosen the path he has, made me realize, I truly hope one day I can speak with such passion about my work. His has been a life of hard work, early mornings, long days and exhausting evenings. His family has been in the food industry before it was popular, serving the residents of Sansepolcro the food of the people. He traveled, in the military mainly, and came back with a more open mind, having tried new foods, and seen new faces. Yet, his true love is going back to his roots, as he says, keeping with tradition. Eat what you have to eat, when you have to eat it. Seasonality is not a fad for him, it’s his way of life. He spoke about the new chefs he sees on TV, the ones who do re-invented dishes that your grandmother used to make. To Giugliano your grandmother’s dish is the way she made it, no variations, which is how he likes to cook.

“Cooking is akin to love. The way you move the pan, stir the sauce, that is how I show my love to my clients. Food is my passion, and serving it to my clients is my passion. And I will do it until my health tells me otherwise.” I hope Giugliano stays healthy a long, long time.