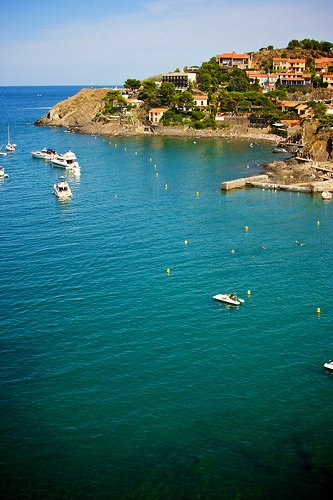 Last week, we had the pleasure of enjoying some quality family time in the small mountainous town of Calonge, located north of Barcelona, southeast of Girona and not a stone’s throw from the sea. Perched on a terraced mountain at approximately 500 feet, our casa rural overlooked the dry bush valley, spotted with pine trees, white rhododendrons and red bougainvilleas that slowly declined directly into the bright blue Mediterranean. This entire coastal area is called the Costa Brava, with absolutely breathtakingly scenery and considered the perfect getaway place when you only want to drive an hour to find yourself on the small pebbled beach, relaxing under a palm tree, while eating freshly grilled sardines.

In wine terms, Calonge is located in the Catalan wine appellation of D.O. Emporda, which is broken down into two distinct geographical areas, also known as comarcas. (Flickr photo by [email protected]) Not entirely clear as to what a comarca was, I learned with a little research that the Catalan comarcas originated under the Spanish Republic in 1936 as a political area known to us as a county. However, under Franco‘s rule they were superseded in 1939 during the Spanish Civil War and weren’t restored until a half century later under the Generalitat of Catalonia. Borders have shifted over the years, but the general body of land has remained the same.

If you’ve driven along the coast near Cadaqués, just south of the French border, despite the breathtaking view, you’ll quickly notice like I did with gripping white knuckles on the steering wheel, that you’re not quite at sea level. Much like California’s Route 1, a fair amount of the Alt Emporda  soars over the coast with death defying cliffs and few guard rails. At its most northern edge, the Alt EmpordÃ  begins at the French border where it nestles up against the mountain peaks of the Pyrenees, with vineyards planted up to 260 meters. The coastal winds of the Mediterranean caress the shore to the east, while the flat lands soak in the hot Spanish sun to the south. On the flip side, the Baix EmpordÃ , located just east of Girona, can still boast of steep slopes like its northern brother, but lacks in both altitude and overall size.

Having traveled through both distinct geographical areas, I can tell you that sand will become your best friend, as it is prevalent just about everywhere other than the granite and slate mountainous regions. As both areas hug the coast, soils tend to be grittier underfoot, only incorporating alluvial soils in the valleys.

This area of Spain in renown for the great Tramontane. The Tramontane is a gusting northerly wind that sweeps through the region at speeds of 120 km/h, forcing those little grapes to hang on tight! Living just south of this region, we have the “privilege” of experiencing this wind annually, watching clay flower pots fly across our rooftop terrace, glass light covers crash to the ground, and plastic storage units filled with everything from paint cans to metal tools lean on our 5th floor railing – threatening to take a flying leap over the edge. But fortunately, no major damage has been accrued to date, and typically we are blessed with mild winters consisting of temperaturesÂ  well over 35 degrees F., and hot summers refreshed from cool sea breezes off the Mediterranean.

Recently confirmed during a winery visit, vines in the Emporda  are generally 30 years of age or older. And in the coming days, we’ll share some legendary stories of how one winery, dating back four generations, claims to have survived phylloxera as a result of a unique native grape variety.

Legends aside, red wines from this area are typically made from Samsó (also known as Carignan or Carinyena) and Garnacha Tinto (known in this region as Lledoner, and more broadly in Catalunya as Garnatxa Tinta). But like most regions in Iberia, the D.O. has allowed new world varieties such as Cabernet Sauvignon, Cabernet Franc, Merlot and Syrah, as well as traditional Spanish grapes, such as Tempranillo, Monastrell and Garnacha Peluda. Whereas, whites are generally made with Garnacha Blanca, Muscat, and Macabeo and Xarel.lo (2 of the 3 traditional Cava grapes), in addition to Chardonnay, Sauvignon Blanc and Gewurztraminer.

Over the years, we’ve thoroughly enjoyed whites from this region, and have only recently have been dipping into the reds.Â  From our experience, reds tend to be big, bold, spicy and sensual wines with good acidity and structure that allow for a long lingering dark fruit finish. Whereas whites are more floral and perfumey, with subtle acidity and nice round mouthfeel.

Interestingly, you can also find sweet garnatxa and traditional Moscatell de l’EmpordÃ  wines in the Emporda, as well as many under-appreciated mistellas. Next week, I’ll introduce you to a winery that is elaborating a mistella, in collaboration with a famous regional chef, made with both garnatxa and fresh apple juice!

According to the DO EmpordÃ  website, which is quite good by the way, there are approximately 35 bodegas registered in the Empordan, of which around 22 have websites. For a region to have over half it’s bodegas with a website is incredibly impressive, but whether or not they’re functioning and user-friendly may be another story. If you’re interested in a specific bodega, check out their website for more information.

In regards to enotourism, most of these wineries would be a hike to get to by train, but it is doable. This means, if you are in the Emporda  vacationing, you can hop on a bus or train and meander you way at least 5 miles from just about any winery. Ideal? Maybe not, but definitely worth a shot if you are without personal wheels. The same also holds true if you’re staying Barcelona. My only suggestion is to stay the night in the region so you’re not having to travel 4 hours roundtrip in one day. Please make sure you read our article on wineries to visit by train, as it will give you important tips and tricks to consider before visiting an Iberian winery.

In the coming days, I’ll be covering a few wineries from this region to give you a better idea of what D.O. Emporda is not only producing, but their untold stories. In the meantime, let us know if you’ve tried any wines from these region, and please let us know what your impressions are?