A Meat-Lover’s Guide to Portuguese Beef 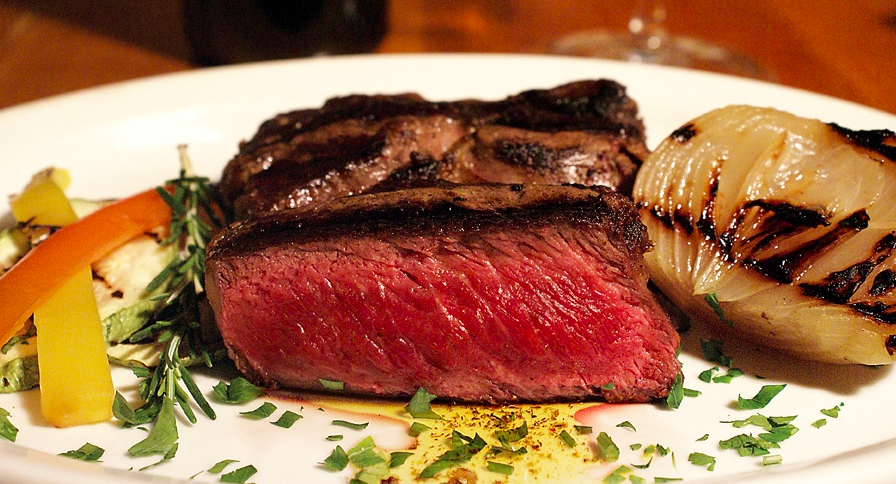 With large milky eyes, and softly splotched brown skin, the cow is by far the greatest protagonist in any baby book. Between the thick cardboard pages, she’ll pop up dozens of times among her barnyard friends guiding the child through their first words.

“Coooowwww!” Considerably easier than hippopotamus, right? But among the baskets of books I have for our wee one, I have yet to meet the cow’s intimidating counterpart, the bull. With his thick, muscular neck and enormous hind legs, his highly sensitive and emotional self is rarely seen, nor heard from. Odd, no?! (photo by Aitor Salaberria)

The irony is that I’m a Midwesterner! Having grown up in Chicago – once home to one of the largest meatpacking districts in the world – you’d imagine I’d be a resident expert on all things bovine. I should know how every steak, rump roast and rib was procured, sliced and delivered. Which breeds are flavorful and what cooking techniques yield the best results. But my world was perfectly packaged in plastic, a fairytale ending to a harsher, more tumultuous story…that is, until I moved to Iberia. Here, cattle are both prized for their skill in the ring, as well as its flavor in a meal. Walk into any butcher and you’ll encounter huge slabs of beef hanging from a hook, thick tongues on a display and a diverse selection of organs at your fingertips. Consider Iberia your carnivore utopia!

Why do I bring this up? Because very recently, when encountering a long table filled with thick, perfectly marbled Portuguese ox meat, I found myself muttering, Errr, what the (bleep) is an ox? I wondered if it wasn’t a distant cousin of a cow, or a totally different species more closely related to a bison, yak or yeti. And to my defense, I wasn’t alone! No one knew what an ox was in my wee bubble of influence! Clearly, unless you’re raised on – or near – a ranch, it’s all cow to you!

Time to get Carnivorously Educated

Why is this relevant? If you’re crossing continents, it’s important to know what you’re consuming or potentially buying. Ox in one country, might be steer or bull in another. The same is absolutely true for cuts of meat.

Now you might be thinking, “What’s up with the masterclass on beef? If it’s red and tasty, I’m happy.” Completely fair statement, but when I attended the 3rd Annual Trás-os-Montes Ox Festival, where I savored old Portuguese draft ox, the diehard foodie would vehemently disagree. This was my first festival, but hopefully not my last, because it brought to light how unbelievably ignorant I was, not only only cattle as a whole, but specifically about Portuguese beef. (photo by Rosino) 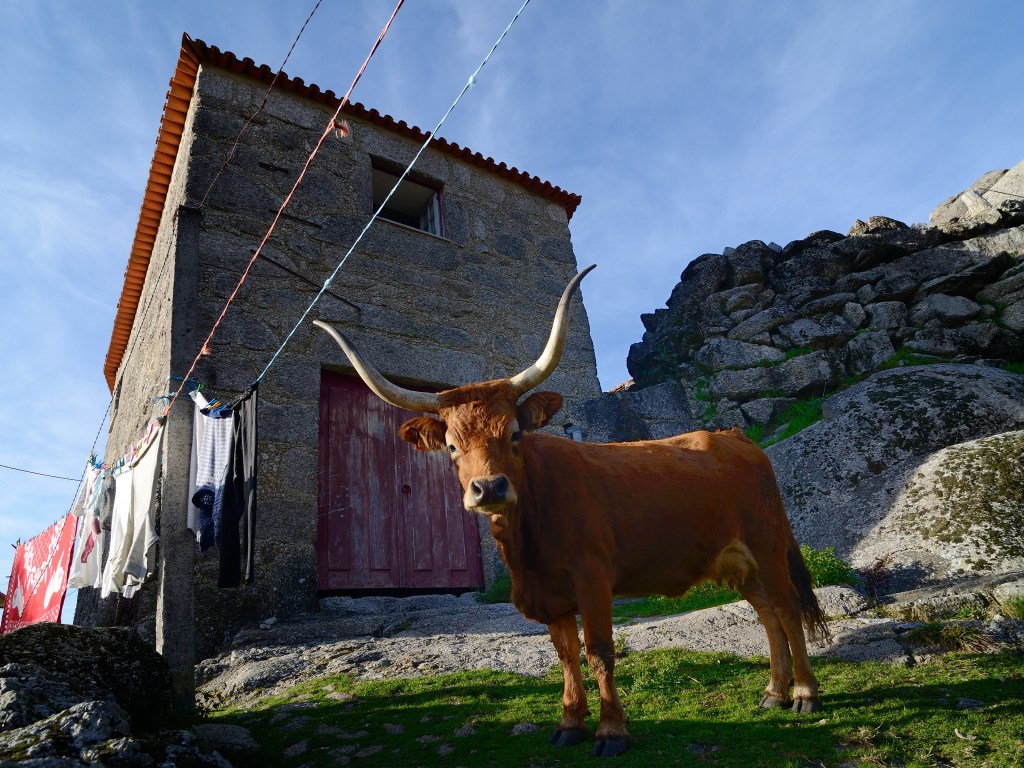 Having lived under an oppressive dictatorship for nearly a half century, followed by bureaucratic chaos and worldwide financial crisis, it’s no wonder why the average Portuguese has yet to enjoy a 3 inch thick T-bone. Unless ranching was a family endeavor, thinner, cheaper cuts of meat were prized and turned into rich, flavorful stews or breaded paper-thin cutlets. Even the “extraneous” parts were made into savory comfort food, such as braised tongue, oxtail and tripe. Where luxury lacked, innovation flowed, making Portugal renowned for its diverse and mouthwateringly delicious gastronomy.

Though thick, marbled cuts of beef are a rarity on many Portuguese tables, there are exceptions, especially in traditional cattle rearing regions where farmers pride themselves on organic herding that result in premium cuts of meat.

Ten of these native Portuguese breeds are now geographically protected and regulated under the PDOs or DOP (Denominação de Origem Protegida) label from the European Commission, and are absolutely worthy of seeking out.

10 Local Meats to Order in Portugal

1. Arouquesa – adapted to the mountains of Arouca in northern Portugal, this “small” breed is renowned for their muscular hind legs. In the past century, oxen often were often exported to the UK because of their gorgeous marbled beef. The 1meat was so famed, that in 1902, Arouquesa won the “Award for the Best Beef” in Paris. Good trivia, the calves must remain with their mother and suckle for a period of 5 to 7 months and once that period is complete the feed of the animals must consist of natural products such as rye, oats, straw and maize.

2. Barrosã –  originally from the Peneda-Gerês National Park in the extreme north of Portugal (Minho and Trãs-os-Montes regions), the Barrosa is known for its long, distinct horns – the kind of horns you don’t particularly want to get in a row with in a dark alley. That said, its meat is extremely tender with little intramuscular fat lending to gorgeous juicy meat.

3. Cachena da Peneda Gerês – originally bred in the Vila Real District, an agriculturally poor district in the extreme north of Portugal, the Cachena can also be found in Galicia. Cachena and Barrosã are sometimes considered variants of the same race, though Cachena are considerably smaller and known for their insanely delicious meat.

5. Charneca  – Charneca beef is produced in a large area in southern Portugal, north of Beja and south of Castelo Branco. Interestingly, the designated breed of cattle is called Preta (the black breed), which cannot travel more than 8 hours from the farm to the slaughterhouse to prevent undue stress. Then, the animals must rest for 12 hours in a special area that’s well ventilated with clean water to allow a gentle transition onto their next stage of existence. Hopefully, they enjoy a fabulous last supper as well!

6. Bravo do Ribatejo – Bravo do Ribatejo beef is produced in a widely fragmented area consisting of three parts – a large one in southern Portugal, another small one on the eastern border with Spain and a tiny one just northwest of Coimbra. The meat is from the purebred cattle of the Brava de Lide breed, which grazes freely off the land.

7. Marinhoa – produced in the western portion of Portugal, between the cities of Leiria and Porto. The Marinhoa diet is based on traditional fodder, however when housed their food consists of maize, rye grass, straw and hay.

8. Maronesa – the meat is derived from the primitive Maronesa cattle, which are said to closely resemble the extinct aurochs (wild ancestor of domestic cattle), and not a traditional crossbreed of other Iberian cattle. This is also a hearty and insanely rugged breed due to its native terrain, the Serra do Marão mountains of Portugal.

9. Mertolenga – with a red or reddish coat and white patches, this medium sized breed is also graced with white patches and white hook shaped horns. Native to southern Portugal, in the Low Alentejo and Ribatejo regions, the Mertolenga is a lovely marbled meat.

10. Mirandesa  – Today the Mirandesa is grown for beef in the natural pastures of Northeast Transmontano that includes the county of Miranda do Douro (hence the name). But back in the day, this large breed, known for its loose curly locks between its horns, was used to pull fishing boats from the water. I just gave you fabulous bar trivia material! You’re welcome.

Where to Enjoy Portuguese Beef?

This is a tough question, as steak houses aren’t synonymous with Portugal. That said, this is slowly changing, and an article we’ll tackle in more detail in the future. But to error on the side of caution, our best suggestion is twofold: either dine at high-end hotel or restaurant or hightail it to the source (terra). Some of the best examples of these meats are, understandably, in the region itself; and there’s no better people to suggest a great restaurant than the locals. If you are in Lisbon, however, check out: Café de São Bento, Carvoaria Jacto, O Talho, Sul and Cantinho do Avillez in Lisbon. In Porto, look for Reitoria, Rib Beef & Wine and Tenra.

Book a Food and Wine Tour in Portugal

If you’re “dying” for a guided tour of these gorgeous Portuguese meats, savoring their charred intoxicating flavor, drop us a line. We’d love an excuse to invite you on our Culinary Food Tour of Portugal, a Food Tour of Porto or custom design a foodie tour specifically for you and your carnivore friends!