How Should Albariño Taste? A Palatable Debate 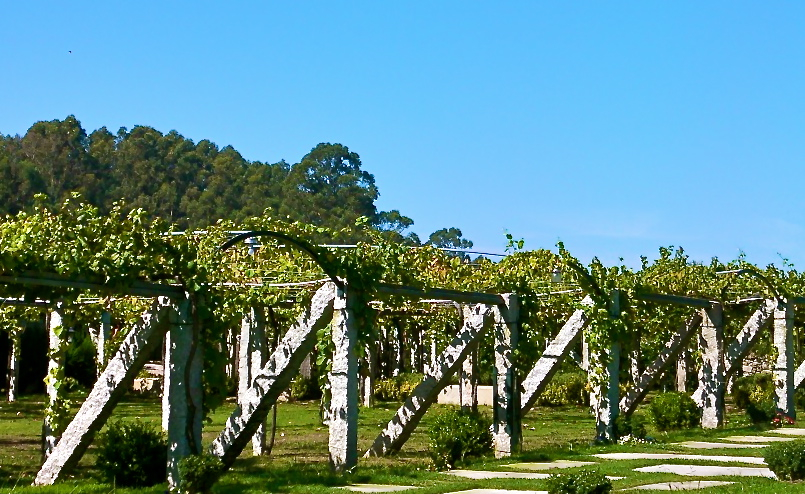 A few weeks ago I found myself in the midst of a blind tasting with five Masters of Wine candidates. I will tell you how I came to be there another time, but part of it was down to my – dare I say childish – love of blind tastings. Once we had spent a couple of hours trying to pin down 12 wines, it was time for the enjoyment of discovery: time to unwrap the bottles. I will not bore you with the lineup but draw your attention to a bit of a spat concerning one wine: Pazo de Senorans Albarino 2009. While this wine is considered a classic by the Institute of Masters of Wine (the 2008 one figured on the exam last year), one of our number (himself a Spaniard with no small degree of tasting experience) complained: this wine was not a classic example of Albarino, this was not how Albarino should taste, this wasn’t right.

So how should Albarino taste? Back in September, Ryan asked pretty much the same question of Rioja, and I don’t think he’ll ever get a straightforward answer (even the joke that Brettanomyces is considered a defining characteristic of some Gran Reservas is by no means universal). Similarly, I doubt we’ll ever get one for Albarino. Winemaking techniques evolve – mainly for the better – and although that means regional characteristics get distorted (if you were of Gallic philosophy you might say that no matter what the winemaker does, the terroir shines through), we perhaps become freer to approach and discover new regions through this manipulation.

My first great Albarino experience was several years ago with an older vintage of Nora de Nieve – a barrel-fermented style, with the butteriness of a Burgundy Chardonnay and the – can I say characteristic? – zip of Albarino acidity. A classic style of Rias Baixas it may not have been. A fantastic wine it certainly was. It’s utterly absurd to say it, but I’ll be honest: putting Albarino in oak and giving it some lees helped me make a transition from something I understood (Burgundian Chardonnay) to something I didn’t have much idea about (Albarino). Purists might shake their heads but it did make me more interested in Albarino and Rias Baixas, and I flatter myself to believe that many other people would have similar experiences.

But it’s not all one way traffic, and I’m sure not everyone is quite so fortunate in their first sip of Albarino. I remember last year, sitting in a Vinoteca in the heart of Rias Baixas, tasting wine after wine that, had I not know Albarino could have been more interesting, would have left me bored and unimpressed.

But what are the classic characteristics of Rias Baixas Albarino, then? This is debatable but probably: a very aromatic nose of something like peaches and apricots; decent palate weight; but not broad or flabby; and a lovely, fresh, zippy acidic finish. OK? Well, good luck.

Last year I took three Rias Baixas Albarinos of different price ranges off the supermarket shelf to try at home. Ranging in price from around €3 to €13, the best was the cheapest (the Anae 2009, at €3.50), but that was hardly saying a great deal. The 2009 Senorio de Sobral – which proudly sported a Concours Mondial de Bruxelles gold medal on its neck – had quite an uninspirational level of residual sugar and a touch of spritz to boot. The 2008 Leiras, which is made by Cava giant Cordoniu and has a very stylish – if a little passe – frosted glass bottle, smelled like stewed riverbank reeds. I tried them again later to be sure. And the next day. But they hadn’t improved. One lesson was definitely learned: if you don’t know what you’re getting, buy the latest vintage possible. But surely this wasn’t representative of all Albarino?

So last weekend I tried the experiment again but went a bit more up-market in my choices: a 2009 Terras Gauda, a 2009 Martin Codax, a 2009 Fillaboa and – this time – the 2010 Senorio de Sobral (still sporting its Concours Mondial de Bruxelles gold medal tag). For those of you doing the mathematics, the Senorio de Sobral was indeed from last year – picked about five months ago – but apparently this is how Albarino used to be: picked, fermented and bottled for the new year.

The possibility that the residual sugar (also known as RS in tasting circles) in my 2009 bottle was the consequence of a strange batch and not a winemaking decision was immediately quashed. The wine smelled lovely but, for me, there is no need for semi-sweet Albarino in this world unless you’re trying to ape Alsatian aperitif wines – and I don’t think there’s much need for that either. To my mind, it’s a shame that what is clearly some very nice fruit (as evidenced by the beauty of the aromas) is not being left to go dry – but I suppose there may well be fans of that kind of wine. [As an aside this merely the observation that peer group tastings (blind or not) favor wines with a bit of RS. I don’t think the Concours Mondial de Bruxelles judges aren’t up to it just as much as I doubt they believe this kind of wine is classic Albarino. Of course, it may well be that the gold medal was given to a different style of wine – from what I can work out Sobral got the gold in 2008 – in which case, we should direct our complaints elsewhere – i.e. towards Sobral’s marketing]

Moving on, though. The Fillaboa I was unprepared for: a wine built around acidity. It was the very definition of linear – ‘a purists wine’ my tasting companion informed me. It wasn’t unpleasant but you probably should be a fan of the linear, racy, jangly, tight, searing wines before buying and drinking this. I kid you not – the wine’s finish literally did taste like I had been sucking on a cold stone. And I actually quite liked it.

Now, I know Martin Codax is a big name in Rias Baixas. But it wasn’t that impressive. In fact, I can’t think of a great deal to say about it. So let’s move on to the Terras Gauda, which was the best wine of the bunch. Although it had that slightly reedy nose I find a lot in Rias Baixas, it was an attractive aroma (not necessarily one that bought peaches immediately to mind) – almost heathery – with a great, textured, balanced body. The peaches certainly came out on the finish which was lovely and fresh. It was easily my pick of the bunch. To give you a league table, (in order of most wine missing from the bottles that evening) the Terras Gauda came first, very closely followed by the Fillaboa, then Martin Codax, then Senorio de Sobral.

This morning, being nothing if not assiduous, I wanted to remedy the poor excuse for a tasting note I gave to the Pazo de Senorans when we tasted it all those weeks ago – especially given that it was the bottle responsible for this long post. And to be honest, it was a pretty fair representative of Rias Baixas Albarino – better than the Codax and the Sobral, similar to the Fillaboa and the Terras Gauda but without either’s acidity.

Empirical (though limited) research therefore suggests (a) that those wishing to dip into Albarino from a supermarket selection should always go for the youngest wines; (b) that most Albarino doesn’t smell of peaches that much – in fact none of the bottles I tasted were hugely aromatic; and (c) what Rias Baixas Albarino actually is – or at least what it should be – is still wide open to debate.

But my final point (yes, I will shut up) is that surely, if Albarino is meant to be a fragrant, fresh, aromatic wine, for the most part made to be drunk young and purportedly displaying aromas of peaches, why on earth is it that only one of the wines I tried was sealed under screwcap?

Leiras, Rias Baixas, Albarino, 2008
The only wine under screwcap and unfortunately it’s getting a bit tired. Very stewed and weedy on the nose. There’s the vestiges of a decently made wine here but I think this has just gone over the hill without so much as a goodbye kiss. Albarino might be able to age, but not this.

Fillaboa, Albarino, Rias Baixas, 2009
A bit stewy/reedy/composty a first although this blows off and opens up a bit after a few minutes. Nice, bright fruit on the palate. Very linear style, with a backbone of pure acidity. Very much like sucking a stone.

Martin Codax, Albarino, Rias Baixas, 2009
A hint cheesy, stewy, although, again, I think this does blow off a bit after a while. A decent helping of acidity here although not a great deal of fruit in there though.

Terras Gauda, Albarino, Rias Baixas, 2009
Actually quite an attractive, heathery nose. Very attractive balance, with nice Albarino (peachy) fruit and a great finish with good freshness. The best compliment I can pay it is that when retasting it this morning, I struggled to keep myself from swallowing it. King of the crop.

Contact us now to book a custom wine tour in Rias Baixas with Catavino!