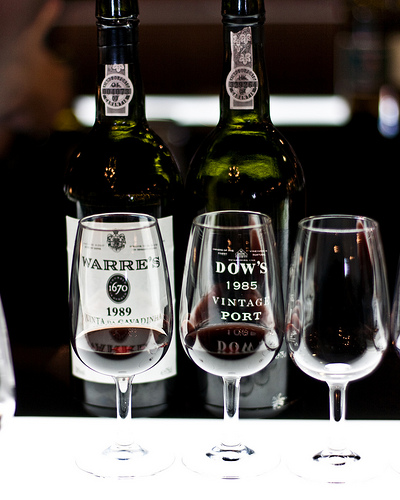 Many of us who love a good glass of wine would agree with Robert Louis Stevenson, whose famous quote says “Wine is bottled poetry”. And while I may not recite Emily Dickenson or Thoreau with every glass, there is no doubt that certain wines speak to us in ways that elicit the feelings that are associated with appreciating fine art, a piece of music or a classic poem.

Perhaps it is the hope of every winemaker that all who drink his wine experience this ethereal, sensory experience. However, as I discovered on a recent visit to Portugal, it’s not always just the winemakers who want the wine to be of earth-moving quality, but the industry regulators too.

Trade bodies exist to protect the consumer and ensure that every bottle meets the stringent and specific standards required by law in any particular region, but the term ‘industry regulators’ while accurate, is an unfairly boring name for these wine-loving people.

One such association of regulators is Portugal’s Douro & Port Wine Institute, or IVDP for short. Their mission, which they have whole-heartedly chosen to accept, is to analyze and certify all port and table wines made in the Douro Valley.

We paid a visit to the IVDP offices in Porto, a magnificent building encompassing a former bank and newspaper, and walked through the laboratories where white-coated analysts were hard at work performing ongoing chemical tests of wines from the region in order to guarantee their quality and authenticity.

We looked through the window of the tasting room at the row of partitioned desks, reminiscent of seated voting booths, where the critical taste tests are undertaken. Every single port and Douro table wine must be approved by the IVDP before it can be offered for sale to the public.

The IVDP as we know it today has a long history and began as the IVP, the Port Wine Institute, in 1933; the Tasting Chamber was introduced a year later. In 1999, they became the world’s first fully accredited sensory analysis lab as governed by the International Organization for Standardization (ISO). The latest change came in 2003 when with the inclusion of certification of the wines of the Douro, the name changed from the IVP to the IVDP, the Douro and Port Wine Institute.

I was intrigued by the ‘tasting chamber’ and wondered who the fortunate people were who spent their days locked away in secluded communion with a never-ending river of wine. I had to find out more.

Tasters have been an integral part of port production ever since the region was demarcated by the Marquis of Pombal in 1756. Back then they would travel out to the Douro Valley and visit the quintas to ensure authenticity of the wine. Today, the tasters no longer go to the vineyards, instead the wines, over 10,000 samples of them, are sent to their offices in Porto. The role of ‘taster’, as you can imagine, is a coveted one!

Tasting the wines is a huge responsibility, but for the fortunate few (less than 15 individuals) it is also “the best job in the world!”. Bento Amaral, the handsome gentleman behind the voice of the above quote, is the IVDP Testing Coordinator and one of the lucky individuals tasked with tasting the wines seeking authorization (he is also an Olympic athlete in adaptive sailing!).

Bento showed us around the meandering corridors of the IVDP and I was able to pick his brain to learn more about the role of taster. I started by asking him to explain exactly what it is the tasters are looking for specifically.

“We taste each sample to make sure it has the minimal quality and age for the proposed style of wine” he answered (he’s referring to the different port categories explained here ***link***). “When speaking about how we judge quality, it’s hard to explain, but the starting point is the universal concept of BLIC (balance, length, intensity and complexity) as defined by Master of Wine, Jane Hunt.”

So who exactly are the people are given the privilege of being an IVDP taster? They are usually employees of the IVDP and have other responsibilities within the institute, but it’s not a hard and fast rule and outsiders have been known to join as well.

The number of tasters varies, the minimum is six, but there isn’t a maximum, the more they have the more robust their results are. “At this time we’re 14 tasters (5 women, 9 men), including the head of the Tasting Chamber, and we have one female trainee. Two tasters are assigned only to Port Wine, 7 only for Douro wine and 5 for both,” Bento tells me. “If someone from the institute is interested in becoming a taster, it helps if they already have some technical knowledge from other aspects of their work and if the daily 2 hours of tasting doesn’t conflict with their other responsibilities.”

So how many wines are usually on the ballot? “20 port samples, of all categories, are tasted every morning and 24 Douro table wines are tasted 3 times a week in the afternoon,” Bento explains with the twinkle in his eye of someone who obviously enjoys these rituals. After the wines are tasted, the group discusses them and the final decision is made by majority rule. If there are doubts, a 4-3 vote for example, the wine is resubmitted and tasted again.

It might seem like a glamorous role (ok, who am I kidding, it is pretty awesome!), but like any other fabulous job, there is a good deal of training that happens first. Before becoming a taster, each person must undergo four months of education which obviously includes tasting a hundreds of wines to gain the necessary understanding of what is expected and accepted within each style of port, (including reserve, LBV, tawny, pink, white and vintage) and table wine (standard Douro, Reserva and Grande Reserva).

Another important aspect of the training, which I hadn’t considered, incorporates psychological preparation because as Bento explains “You can’t feel pressured by refusing a wine when you know there will be economic consequences for the owner of it.”

Speaking of rejections, about 10% of the wines are discarded, the main reason being they were submitted to the wrong category. When this happens, the producer has the opportunity to resubmit the wine for certification in a different category (often a lesser one, from LBV to ruby for example) and then are usually successful in gaining the credentials.

And what if a producer disagrees with the decision of the tasting panel? There exists an Advisory Board composed of well renowned winemakers to whom they can appeal.

Since these tasters spend hours each week trying the wines of the region, they have a unique insight into how the overall style and quality is evolving and what we’ll find on our shop shelves. Bento told me he’s finding a lot of the Douro (non-port) wines are more balanced than they used to be and the winemakers seem to be more careful to not overdo the oak influence. While Vintage Ports he says are progressing towards “more colour and softer tannins, without losing their expected ageing potential,” which he believes, is due to the evolution of the viticulture and the progress of winemaking techniques.

Think you might have what it takes to be an IVDP taster? I asked Bento for his opinion on the necessary skills to be successful in the role. The good news is you don’t have to have a super sensitive palate, “Surprisingly I would say regular visual, olfactory, tactile and taste senses are all you need, but with a lot of passion and commitment. Psychological stability is also a very important factor, otherwise you’ll give higher marks on a day you’re euphoric and lower marks when you’re down.”

And by the sounds of things, it’s a rewarding job for the selected few that become part of this elite team. “For me, the opportunity to taste so many good and different wines and to have a window into the trends of the new wines is my favourite aspect – it’s lovely work, but my teeth are always dark!” Bento says, “It’s a sensorial pleasure but also a lesson about the world of wine.”

I greatly enjoyed delving into the world of the unsung wine and port taster and learning more about their rather fabulous work. Many thanks to Bento for showing me around and sharing his unique perspective into a part of Portuguese wine production that for many goes unseen and uncelebrated.

Next time you pull the cork on a bottle of wine from the Douro Valley or settle in to sip on a glass of port, give a nod to Bento and his fellow tasters at the IVDP who are making the world of port and Douro wine safe for wine lovers everywhere!