Part 1: Mallorca: The Jewel of the Mediterranean 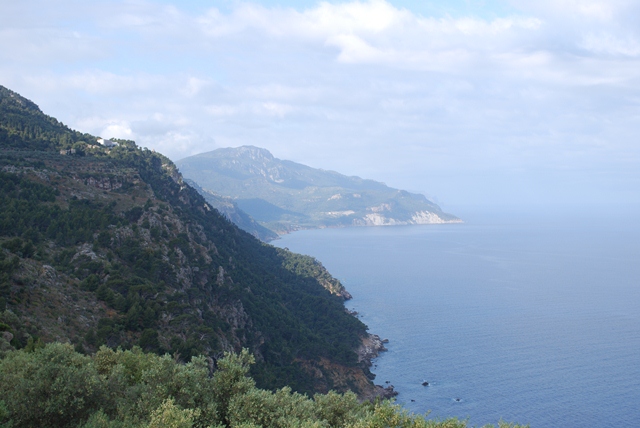 Amidst the periphery of the northeastern Iberian coastline lies one of the jewels in the Spanish crown – Mallorca (often spelt Majorca by English speakers). For years, I longed to visit the Balearics and only recently did that wish become reality. One luxurious week on an island in the Med. Would it be the experience I expected of a Mediterranean island? Yes and no. Surprises lurked around every corner – the island, the food, the wine – and the trip was beyond expectations. Prepare to be enamored by Mallorca, the jewel of the Mediterranean.

Majorca, the largest of the four Balearic Islands (Minorca, Ibiza, and Formentera are the other three), has a history dating back 8000 years. As was true of most of what is now southern Europe the Romans ruled the island for a considerable period of time (from around 123 BC). Driven predominantly by olive cultivation and viticulture, the island remained under Roman rule 500 years until the Vandals gained control. Over the ensuing 700 years, Mallorca was conquered by the Byzantine Empire, the Muslims, the Caliphates, the Moors, and various others, until King James I of Aragon launched an invasion on the island in 1229. The island has been under Spanish rule ever since.

Why the history lesson? Mallorca’s diverse past helps one understand its unique and varied culture and character. For decades Majorca has been a popular destination amongst Spaniards and non-Spaniards alike (in particular visitors from Germany and the UK), and tourism accounts for more than ¾ of the island’s GDP, as it caters to cruise shippers, sun-sea-and-sand tourists and is also one of Spain’s top sailing resorts. Thousands of restaurants dot the cityscapes with unique and delicious food and the wines are truly becoming world-class (more on both in the next two parts of this series).

Palma, Mallorca’s capital, houses half of the island’s population and a bustling metropolis, although that looks a little different on this island than on the Spanish mainland. Cruise ships abound and tourists sometimes crowd every nook and cranny of the city, but Palma’s matchless charm thrives despite its popularity. Palma has something for everyone – boutique shopping, amazing restaurants, tucked-away wine bars, varied and incredible architecture as well as miles of pristine coastline. Unlike most of Spain’s largest cities Palma experiences most of its traffic on the city’s outskirts leaving the interior free for roaming and exploration. The city is home to the tree-lined La Rambla and Passeig des Born as well as a hidden Arab quarter.

No visit to Palma would be complete without at least a cursory visit of La Seu, the gorgeous Gothic cathedral towering above and looking down upon the city and the sea. Construction of the cathedral lasted almost 300 years and boasts the works of Antoni Gaudí (interior restoration from 1904 to 1914) and atheist Mallorcan architect Miquel Barceló (reformation of the Chapel of the Holy Sacrament in 2007). It is truly a site to behold – inside and out.

To experience the diversity and beauty that Mallorca has to offer, one needs to leave Palma and venture outside the city into the Tramuntana Mountains and beyond. As Majorca is a major cruise ship port, car hires are plentiful and available to provide a full day experience of the western side of the island. Your trip up the coast will likely (and should) include most if not all of the following stops: Valldemossa, Deia, Soller, Port de Soller, the Monastery of Lluc, and Inca.

My tour began in Valldemossa, by far one of the loveliest villages on Mallorca. Opulent views over lush countryside abound from almost every corner of the village and a 13th century monastery with ties to Polish composer Frederic Chopin sits prominently in the town center. Grabbing an ensaïmada (more to come in Part 2 on this flaky and addictive pastry) and it is back in the car for a quick jaunt up the coast to the charming village of Deia. Now a millionaire’s getaway and the resting place of poet Robert Graves, this quaint hamlet is a must-visit on a western Mallorca road trip. Only a 15 minute trip is Soller, a lush valley of orange groves situated between the mountains and the sea. If you do anything here grab a glass of fresh-squeezed orange juice. It will undoubtedly be the best you will ever taste.

Miles of twisting, turning roads lay ahead as the driver pushed onward and upward through the Tramuntana Mountains and off to the coast for a lunchtime stop in Port de Soller. The ideal location for a stroll along the sea and a relaxing bit to eat, the Port combines incredible mountain scenery along with calming sea views. After some window shopping we were back in the car and on our way to the Monastery of Lluc – home to the famous Black Madonna (La Moreneta). The trip back to Palma included a quick stop in the “city of leather”, Inca, as well as a visit to Mallorca’s best known wine region, Binissalem (again, more to come on the wines of Mallorca).

Energetic yet tranquil, the isle of Mallorca is a vacationer’s paradise. Lush and beautiful mountainous scenery gives way to picturesque sea views and unique tastes sit tucked away between centuries old buildings. The quintessential getaway – short or long – Mallorca provides an experience to suit every taste.