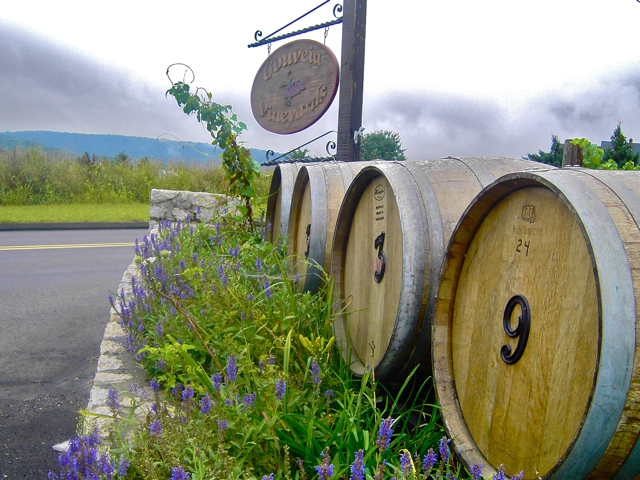 Editor’s Note: A few month’s ago, we were contacted by a passionate Portuguese emigrant, living in Connecticut, who longed to share stories about the foods, wines and culture of Portugal. And having stumbled across Catavino, she felt it would be the perfect location to place such stories, a request we couldn’t refuse. Sonia Andresson-Nolasco is currently a Senior Writer at Event Marketer magazine. She has worked as a journalist at newspapers and magazines for eight years, and we’re elated to have her contribution! Please give Sonia a very warm welcome, and let’s hope this piece will be the first of many more to come.

Amid stainless steel tanks and oak barrels Joe’s white-bearded face lights up as he recalls his childhood in a small village in Portugal. It’s the kind of village tourists rarely visit, and yet folks born there are changed by it forever. Jose “Joe” Gouveia, 60, was born in Trancoselos in the district of Viseu, a mountainous region in the interior of the country where as a child growing up with no electricity during dark and damp winters, spring and summer couldn’t arrive fast enough. “Things came back to life in January, February,” Joe recounts, lovingly. “The first crops that my grandfather tended to were the vines and so everyone would come out and start pruning.”

That fond memory and an entrepreneurial spirit gave birth to the Gouveia Vineyards in Wallingford, Connecticut, where Joe has lived for 46 years. His first stop in America, however, was in New Haven, CT, where at 15 he shined shoes to help the family and
soon realized he had a knack for business. Many entrepreneurial ventures later, Joe’s childhood memories were re-awakened in 1999 when he decided it was time to go into the wine-making business. He purchased his 140-acres, 32 of which are designated
for vines yielding 13 varietals, and where two inviting Old World stone and timber houses sit on a hilltop. One house is the winery and the other is the home Joe shares with his wife Lucy, originally from the Portuguese island of Madeira and their two 20-something-year-old daughters Amanda, a librarian, and Alli, a college student. The houses overlook lush woodlands and 100-year-old farms reminiscent of the village where a seed for wine-making was first planted in Joe.

Clearly comfortable in his own skin, Joe says naming his vineyard Gouveia was unquestionable. Other suggestions included calling it the Nutmeg Vineyard (Connecticut is the Nutmeg state), but Joe went with his gut and stuck to his roots. “I wanted people to know that this is a Portuguese vineyard,” he says, adding that it’s also a way to distinguish it from other vineyards in the state. It’s also a call to Portuguese people that pick to visit Gouveia precisely for its ties to the old country. “Not a week goes by that we don’t get five or six couples that are Portuguese,” says Joe, proudly. “It’s my first time here,” Maria Milhomens, a native of the Portuguese island of Sao Miguel and a resident of Bloomfield, CT, said striking up a conversation with us after hearing we spoke Portuguese, too. “It’s beautiful and I plan on returning.” Like many of the other visitors, Milhomens was accompanied by her family—her husband, son and daughter-in-law. Despite the torrential downpours that day such families ventured out to enjoy their spreads and a bottle of wine just as Joe intended when he first opened up his doors.

During the harvest the place really gets jamming as Joe shares his labor of love for picking grapes with visitors. People longing to revive their own small-village memories or simply to be closer to the wine-making process volunteer to lend a hand. The only
requisite is that they bring their own tools. This September Joe expects 300 volunteers, who as in past years will likely hear about the event through word of mouth and social networking sites like Facebook. In keeping with Portuguese tradition, Joe has his staff crush the first batch of grapes with their feet to give his visitors an authentic experience. Providing folks with unique experiences like this one is what Joe says his vineyard is all about. That’s why he encourages people to bring their food, grab a bottle, sit and stay for awhile at their choice of either the picnic tables al fresco or two bar areas inside where a fire is lit during the winter months. That convivial vision Joe, too, attributes to Portugal. “In Portugal, the restaurants are packed with people sitting with a shot and an espresso. People get together and stay for awhile,” he says. “We wanted Gouveia to be a place where people come together, too, bring their food and stay as long as they like. We’re the only vineyard in the area that offers a big-enough space where people can bring their own food, sit and have wine.”

People can pair up their meal with one of three of Gouveia’s reds, like the 2008 Big E Wine Competition Gold Medal winner the Stone House Red, a blend of Zinfandel, Merlot and Cabernet Franc aged for 12 months in American and French Oak barrels. Also popular, and one we particularly enjoyed from our white selection, is the crisp and fruit forward Seyval Blanc. Resistant to cold, Seyval Blanc is an ideal variety to grow in Connecticut where the winters are harsh. “Our most popular white is the Seyval Blanc. It’s not well known but it’s the number one vine used east of the Rockies. A lot of people use it for blending. I do too, but I also use it straight,” says Joe. There’s also the semi-sweet Whirlwind Rose and Epiphany Reserve, a dessert port-style wine.

It’s an exciting time to be in the wine-making business in Connecticut, according to Joe. There are a lot more wine drinkers in the state these days, especially women he claims, who nudge along their husbands on day trips to vineyards like his. There’s also a strong local food movement in the area, a plus for Joe’s home-grown wines. But there are challenges too, like adhering to vast Connecticut wine laws. For example, not all wineries are allowed to be open on Sunday or to give out samples. “We fall under the Connecticut Farm Winery Act, so we’re allowed to sell on Sundays, which is a big deal. They also allow us to give out wine samples, but in turn we have a number of restrictions on acreage and things of that nature.” Joe says that the law also demands that the wines coming out of vineyards like his be made from a percentage of grapes grown on premise. But that one is fine by Joe. “I’m actually pushing to increase that percentage because a lot of people are not doing it and it makes our wine more distinct, because people want to come out and actually see grape vines,” he says, explaining that commercial wineries (which adhere to different laws) can buy their grapes from anywhere, but they can’t hand out samples. There are other wineries that function mostly as wedding halls, including one that just opened in his area and is closed every Saturday for weddings. Another kind is wineries that in actuality are fruit orchards making cherry-based wines, and the like. Though weddings aren’t his thing, Joe does organize fundraisers that raise money to help local charities and neighbors in need. This he learned from his mother who back in Trancoselos aided the less fortunate. “My mother used to take care of the poor people in our village. Every time I go back people always tell me how my mother did this or that for them. We try to do the same thing here with the fundraisers that allow us to help this community, which has been so supportive of us.”

And when it comes to the question: to cork or not to cork? Joe stands firmly behind his native land, the biggest cork-producing nation. Portugal, he says, has made great strides to improving its cork screws which he dons on all of his bottles. “I think the reason wine-makers are opting for other types of caps is that cork screws cost 25 to 50 cents and the other stuff is 5 to 6 cents. For a guy like me who does a few thousand bottles it’s not that big of a savings, but for someone like Mondavi pushing out millions of bottles a year, it’s a big saving. Plus, it has a bit to do with marketing. Sometimes you have to knock the other product down to make yours popular. But cork is environmentally sound and it’s a tradition I plan to stick to.” (Flickr photo by dpriddy)

Open Thursday through Sunday, Joe says the vineyard is growing rapidly. It pumps out about 12,000 to 14,000 gallons of wine a year and sells roughly 50,000 to 60,000 bottles (average area winery sells 24,000 to 30,000) of wine at the winery and online. He stays away from packaged goods stores that would put a greater demand on his operation, which he currently has full control over and likes it just the way it is. But when it comes to accommodating his visitors, Joe is always looking at new ways to expand. This winter he’s adding a third bar area. He’s also searching for someone to aid him in making the wine—a task he singularly handles. Two full-timers assist him in tending to the vines and 10 women, managed by Joe’s right hand Mary Ann Pauley, rotate running the winery. His wife chips in with the paperwork and he detects a spark of interest in wine in his youngest daughter. He says this whole formula works out beautifully. All that they really ask of him is that there’s wine on the table.