The Nature of the Douro 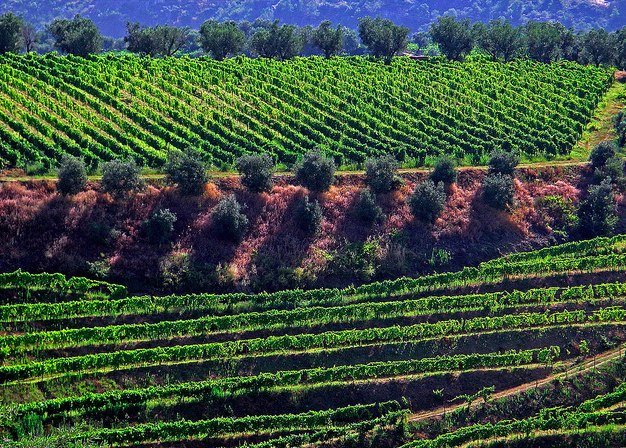 The Douro Valley is rightly considered a wonder of Nature. The river extends for 900 kilometres throughout Iberia, as both the Douro and Duero, and carves its way from the Portuguese border to the Atlantic when it reaches Porto. On its journey, the Douro river has carved a meandering path that is simply mesmerising from every viewpoint. The contours of the hills and valleys seems to dance in elegant patterns around each other. It may not have the vertiginous drama of other famous fjords or canyons, but it is all the more attractive for the smooth, curved elegance of the picture it has created.

At first glance this view is an ode to Nature itself. But appearances can be deceptive.

The Douro Valley we experience and appreciate today owes a great deal to unnatural intervention. Like wine itself, we like to focus on the natural aspects, yet human intelligence, ingenuity and imagination are instrumental too. The Douro is no longer untamed, free to make its way across the country. The river, whose dangerous rapids famously cost the life of Joseph Forrester but spared Doña Antónia Ferreira, no longer exist. The Douro no longer takes weeks to navigate up-stream to collect pipes (418 to 630 liters) of valuable wine. It is now easily navigable by pleasure boats, cruise ships, speedboats as well as cargo vessels who sail up and down the calm waters and deeper channels created by the system of dams and locks.

Many of the rabelo boats glide along apparently unchanged from 19th century designs, yet under the water, diesel-powered engines make that journey so much faster and more reliable.

Then there is the sight of the “Linha do Douro” railway between Porto to Pocinho, that skirts along the river, occasionally tunneling its way through hillsides yet not immune to the undulating lay of the land.

The Vertical Terraces of the Douro

But the most obvious intervention, and the most breathtaking, are the terraces. Here we see the natural and unnatural side by side. There’s nothing natural about the explosive engineering effort required to blast flat steps out of the schist, yet they are then rebuilt from earth and stone, following the curvature of nature with both artistic and scientific precision, so that vines can then grow in perfect conditions, naturally safe in this artificial environment.

A vine is a wonder of nature, able to grow where little else survives. Yet even ones struggle to grow unaided in this valley because of the heat, the infrequent but sometimes torrential rain and the steep, hard rock soils. It really makes you wonder about the first inhabitants who chose to carve their way onto the hills when so much of Portugal is more welcoming. And yet they did.

The terrace too is a contrast, serving as both a ‘natural’ means of capturing and retaining water, stopping soil erosion, determining an adequate exposure to the sun, and allowing vines to establish their roots deep into the soil. But it is also a means for vineyard workers to reach the vines to train them, prune them, treat them and of course, collect the grapes either by hand or machine.

The Douro’s ‘natural’ aura even extends to the winery, valuing the direct contact from foot-treading of the grapes. What could be more natural than the feel of grapes under foot, and the juice up to your knees in the lagar? And yet, today this is often done in specially constructed basins, surrounded by the ascetic stainless steel paraphernalia of modern winemaking. And in a post-modern twist, they even have machines to emulate the ‘natural’ foot treading.

All this dichotomy exists everywhere in wine itself, but although how ‘natural’ wine is can be a matter of some debate, no-one can doubt that the combination of nature and human skill can have amazing results.

Come to the Douro Valley and raise a glass of Douro wine or Port to the team effort of mankind and nature.

Join us in the Douro Valley for a Harvest, Tasting or Winery Tour!