The Possibility of Impossibilities 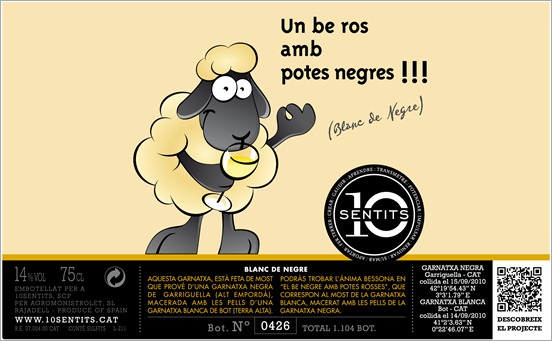 A blanc de noir and a noir de blanc (or “A story of cross-dressing grapes”) When we ‘closed’ Catavino (or rather, put up the virtual ‘gone fishing’ sign), we hinted that our finale might end up being more of a pause in our existence. With time and resources being limited, we opted to focus on those projects that fed us and offered us longevity. However, we knew we would find it difficult not to share our experiences, especially when, as happened recently, we were tasting things that made us stop and think.

To be honest, these weren’t wines that we’d run out to buy up by the case, but they did demonstrate a considerable amount of creativity … and if creativity exists, so does the possibility of change in the Spanish wine industry.

10 Sentits consists of 10 winemakers in Catalunya with a bit of free time on their hands and a profound desire to use the ample amount of cheap juice sloshing around Spain. They are not anonymous, but they are far from shouting their names from rooftops. Instead, they are curious and creative winemakers interested in playing with wine in a fun and unique way.

“Un be ros amb potes negres!!!” and “Un be negre amb potes rosses!!!” are two wines made with Garnacha grapes – both red & white. The names roughly translate to, “A red sheep with black legs” and “A black sheep with red legs”. The first is a Blanc de Noirs, but the latter is a rather unusual Noir de Blancs – the term “Red sheep with black legs” denotes an impossibility in Catalan, similar to the English idiom, “Pigs Might Fly”, which is where the true genius lies in the wine.

A Blanc de Noirs is a French term meaning “white wine from red grapes” and is most often associated with those white sparkling wines that are made entirely from the pinot noir grape. Blanc de Noirs are made by quickly removing the skins from the juice after the grapes have been pressed, preventing the pigment in the grape’s dark skin from transferring color to the wine. Hence, a blanc de noirs is a “A black sheep with red legs”, a real possibility (even if somewhat unnatural).

Then again, who is to say that anything is “impossible”? What happened was that, when creating the blanc de noirs with the red Garnacha grapes, 10 Sentits saved the red skins and used it to color a vat of Garnacha Blanca juice, thereby creating, “A red sheep with black legs”. Tricky but oh so ingenious!

The verdict? Well blind, you would be hard pressed to know which was which. The red (Noir de Blanc) was perfumed like a white might be, with lovely fruit and “white” aromas. While the palate, filled with tannins and slight structure, was a bit awkward but definitely drinkable. The more traditional Blanc de Noir white was very nice, and while it lacked a bit of elegance, it was a fun wine showing the structure of the Garnacha nicely. (Here’s a great post in Catalan on the project. Use google translate to check it out!)

Life is about discovery. Catavino will continue, but in order to do so, we’ll need to consider the impossible. With the amount of passionate support we’ve received since January, and the calls to keep this site alive, we’re confident that as a community, we’ll continue to share stories of change and success in Spanish and Portuguese wine for the foreseeable future.

Don’t expect much for now, but we’re working on it, and soon we hope this little experiment of ours gets back on track.