Top 8 Tips to Enjoying the Beach in Spain and Portugal 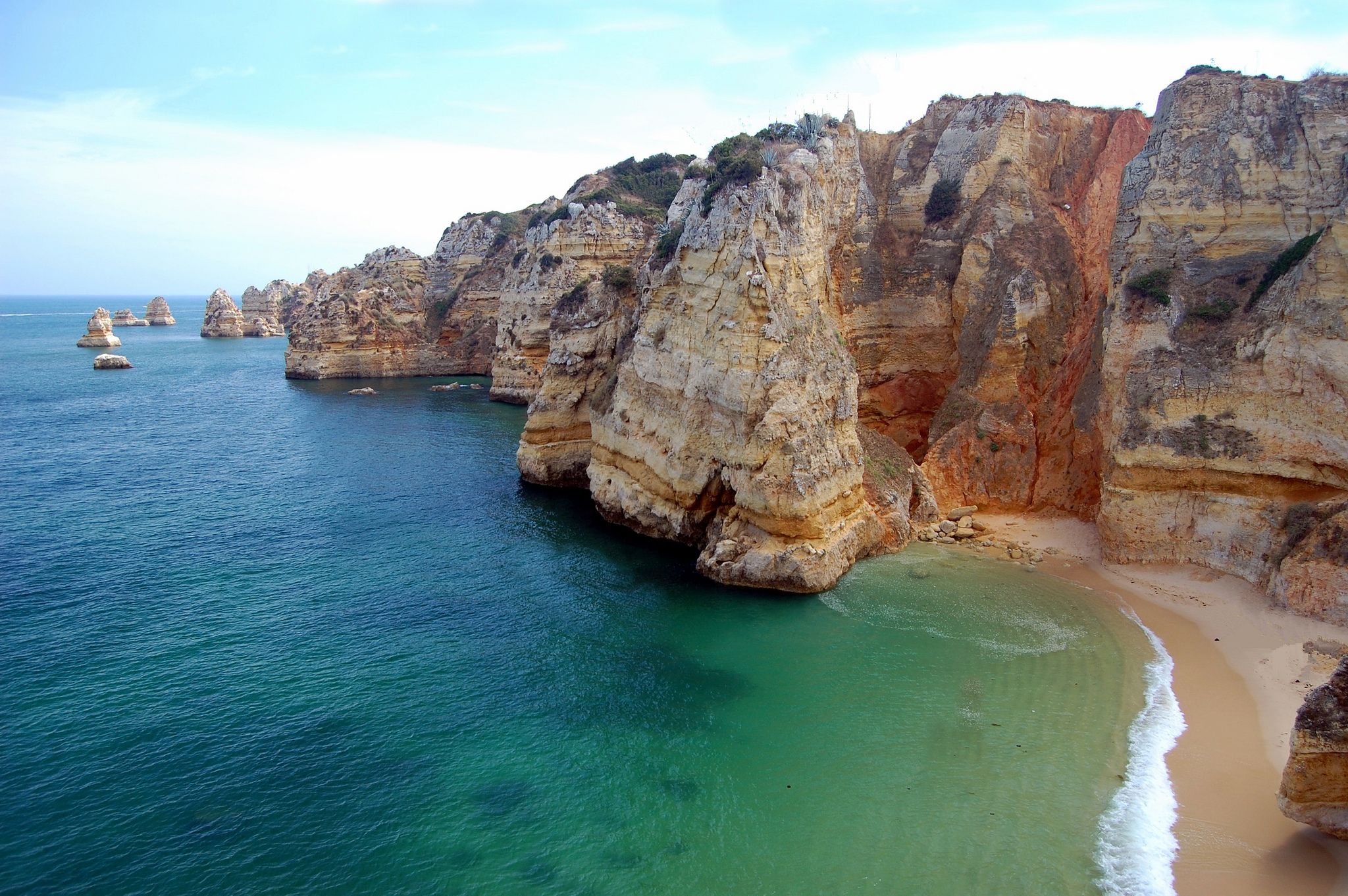 Every culture has their way of celebrating summer, but the Iberians are full on experts at maximizing your beach lounging experience. From serene rocky shores filled with marine life to vivacious sandy beaches sporting live entertainment, swanky restaurants and topless women, there’s surely a beach that fits your style!

But no matter where you are in southern Europe, there are some basic “rules” to live by when hitting the coast. Let’s cover a few to ensure your beachside adventure ends on a fabulous note!

Book a Beachside Vacation in Portugal and Spain

The entire reason why a day at the beach sounds unbelievably fabulous to me, isn’t just the sound of waves lapping upon the shore or the salty, sweet aromas that linger in the air. No, my excitement stems from the gorgeous food I’m going to enjoy throughout the day! The beach requires specific nibbles that typically fall on either side of the flavor spectrum: light and fresh or salty and sweet. Let’s see what each country has to offer:

Unless you have a cooler filled with ice, you’re better off sticking to none perishable items such as cured meats (a must while in Spain), hard Spanish cheeses, produce, nuts, dried fruit, fresh baguettes and pickled and canned foods. There is the option of swinging by a chiringuito, but for the price you’ll pay, it’s often better to shop at an open air market and enjoy a small pica pica along the sea. If you run short on goods, you might stumble across vendors selling pineapple, peal and eat shrimp or sticky buns; but please choose your seafood wisely!! The last thing you want is a marred vacation due to bad seafood! Check out this list of great seaside chiringuitos in Barcelona.

In all honestly,  I would sprint to any coastal restaurant for grilled fish if I were you. Forget the sandy picnic and dine on fresh fish that’s been perfectly grilled and accompanied by a crisp salad, boiled potatoes and heaps of crusty bread to sop up every remaining flavor! If you’re in the Lisbon area, you can order up snails “caracois“ with an ice-cold beer. Granted, snails and beach volleyball aren’t really my cup of tea, but salty potato chips are! In the Algarve, you can savor a bag of homemade made potato chips from the myriad of vendors roaming the beach, followed by a Bolinha de Berlim! Bolinha de Berlim is a fried donut, typically filled with a egg-yolk based cream called creme pasteleiro, and is considered highly addictive. So beware! Though we’ll help you satisfy both your sweet and salty side, be sure to wash it down with something mind-blowingly tasty! Here’s a list of must try foods while in Portugal!

Sweat is pouring down your brow, as you gather that very last strength to turn the page on your kindle with right index finger. The effort is so draining, so painfully exhausting that you’re simply dying for something to refreshing, something that will revitalize your energy and give you life. Sure you could drink water, but with a sea full of liquid licking your toes, it just doesn’t seem worth it. You’re craving something bubbly, something that quenches your thirst while giving off a sophisticated, debonaire feeling. Right? You want sparkling wine!!

Either a Spanish Cava or a Portuguese Espumante would be the perfect accompaniment to your spread of cured sausages and cheese. Not only that, it’s festive, fun to drink and delicious!! The downside being that glass is generally illegal on the coasts. So if you’re not keen to go all mission impossible, you can simply get a bottle of Fino or Manzanilla, or even a young, vibrant white wine from Vinho Verde, Galicia, Rueda, Catalunya and toss it into a plastic bottle or boda bag. What you sacrifice in elegance you gain back tenfold in satisfaction.

lf, for some desperate horrific reason, you find yourself sans wine, you can either buy a cheap beer from the zillions of venders roaming the coast or hit the nearest chiringuito to refill your stash.

You can smoke just about anything you want on the beach, as long as the quantities are for personal consumption only. However, on more one occasion I’ve been told that hash, marijuana and tobacco are encouraged over processed cigarettes. So yes, as long as it’s in the “natural” family, you’ll be in good company. If you’re packing Malboro, and the like, just be considerate of both your butts, which are natural polluters when not kept track of. Rumor has it that Portugal is providing disposable ashtrays that trap the butts inside so they don’t go skyward on a maritime adventure.

Though the Spanish have several names for the various prevailing winds that blow over the country, there’s nothing quite like the ferociousness of the Atlantic! The wind in Portugal can be so intense that your suit better be glued to your skin, especially in Porto, because one powerful current will take that newly bought suit skyward to some lowly cow field in the middle of nowhere Africa. Our suggestion, either purchase a simple wind guard at a local Chinese shop or head to a sporting goods store and pick up a Quechua tent. If your stay is short, and you’re not interested in getting another object to pack around the world, find a beach with cabana you can rent. You’ll not only feel elegant in your 1930’s stripped beach house, but you’ll count your blessings that the wind hasn’t made a luffa of your face!

The Spanish are fabulous at many things, but impromptu jam sessions are by far their forte! If you’re looking for a culture that can gather random people on the fly to begin an all night concert with bongoes, clapping, guitar, and whatever else is lying about, the Spanish are it! The downside being two fold: first, the party may never, ever end; and second, instead of a jam session, it’s a guy with a boombox and crap speakers. So, be bold! If you’re feeling musical, jump in and enjoy the party even if your voice sounds like a hippo on helium. If you’re not feeling musical, either move spots along the beach or bring a pair of ear plugs. The advantage of earplugs being that if you don’t use them at the beach, you’ll most definitely use them sometime during your stay.

Having lived in, and travelled to, many places around the globe, I can unequivocally say that Iberia is an incredible place to live. Violent crime is almost non-existent, people are stupidly kind, and generally, a helping hand is right around any corner. That said, petty theft thrives here! Your camera, wallet, and smartphone are not only vulnerable but screaming to be stolen when beachside. So make your life easy and simply don’t bring them. Keep a few bills on hand and alternate who dives in the sea so you always have one person watching the loot.

Whenever I’m at the beach alone, my rule of thumb is to find an elderly couple who’s grown roots under the sand from being sedative for so long. If game, they can be your “vigilant’ guard while you take laps and cool down. The benefit being twofold: first, they’re not going anywhere, and second, they most likely have no idea how to use your phone or camera anyway. So you’re safe!

Although beaches are “the place” to hang in the summer, it’s difficult to know which are the cleanest, the safest, or quite simply, if there’s anyone nearby to save you when you’ve fallen off your surfboard for the millionth time! First and foremost, look for blue flags with a white circle containing water.  These specific flags are awarded by the EU to clean, well kept beaches that have great environmental and safety standards. In short, it’s a stunning beach with plenty of great lifeguards. Otherwise, keep your eyes peeled for yellow flags, which mean you can paddle, but not swim; and Red, which means to clear out!

You’re in good company if you’re thinking of enjoying the beach sans clothing. There are many ways of letting your girls free, it’s just a question of where and when! In Spain, it’s basically an all play. Find beach -> take off top. It’s that simple. In Portugal, it’s a bit more restricted. No one will run at you with a towel screaming, “OMG! Boobs!” But you won’t be in the majority. Find a complete list of nude friendly beaches here.

As for full on nudity, there are heaps of places to ditch the suit entirely. Again, Spain has the lion’s share of nude beaches, but Portugal is no shrinking violet when it comes to nude friendly beaches. If you’re keen to feel the sun on your hidden bits, simply choose the beaches that fit your needs!

Now that summer is officially here, you’re now equipped with heaps of fabulous information to make your vacation amazing! Whether you’re looking for fab places to “let it all go”, or to keep it in but sip on something delicious while you do, you’re now armed and dangerous! That said, if you need a guide to customize your next trip, giving you the best of beachside living, then drop us a line! We’re more than happy to make your next coastal Spanish and Portuguese vacation an amazing one!

Experience the Beautiful Beaches in Portugal and Spain