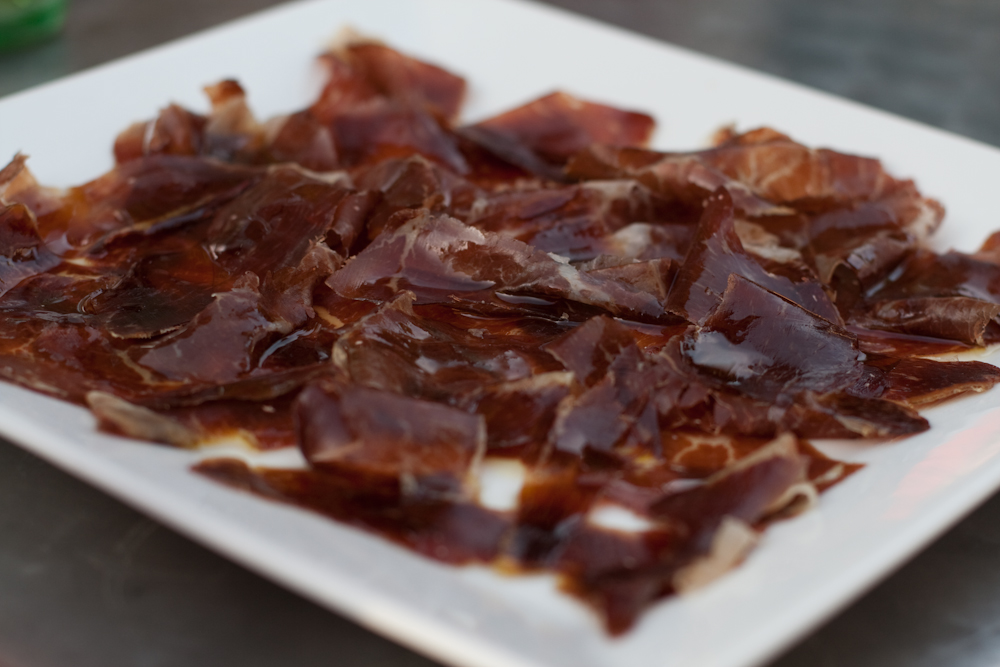 When my husband’s family goes to Italy for Christmas, Jamon is never missing. Served reverently on a large platter, after having been cooled and aired out, it is passed and eaten immediately. Hence, in the spirit of fantastic flavor, we brought Cecina from Leon – a sublime experience. I was accustomed to ordering it in restaurants, which is typically good, but nothing to rave about; but this Cecina was something different. With a beautiful dark cherry hue, a tender mouth feel, sweet and slightly smoky, it was beyond memorable. Why was this so good?  Let’s cut back to a month earlier……

One of our wedding presents was a weekend in a Parador. These reconverted castles, monasteries or important buildings are one of the only positive legacies from “Generalissimo” Francisco Franco which can be found throughout Spain. Last November, we decided to book a Parador in Leon: the capital of Castilla and Leon, notably famous for being on the Route of Saint James, (Camino de Santiago) and for Cecina. Clearly, we came here for the latter.

Upon arrival, we immediately walked the cobblestone streets in active pursuit of that beautiful, air dried beef. Stumbling upon a cute little bodega nestled right next to the Cathedral, we were served thinly sliced Cecina, with a drizzle of extra virgin olive oil, a sprinkling of black pepper and a side of Marcona almonds. As the flavor and texture were ridiculously good, we inquired of the owner where we could buy it. He told us the best Cecina can be found in Astorga, a small town about 40 minutes away from Leon. Without a second thought, we dashed off to the main square in Astorga, where the shopkeeper at “La Casa de La Cecina” lovingly vacuum packed our freshly sliced Cecina – each bag drizzled with olive oil so it would remain tender before she sealed it.

According to the shopkeeper, Cecina was traditionally a very humble product, made by farmers within their homes. As all houses in the region had a hearth, and a few farm animals, this was a particularly easy way to cure the meat for storage during the long winter months. Originally made from horse or donkey meat. When your work animal grew old, and hit that golden moment of “retirement”, it became cecina. But because of the decline in consumption of horse meat in the last 20 years, beef Cecina has not only become more popular, but just about the only type you will find outside of Leon.

Cecina is a cured and smoked meat made from the hind quarters of cows, horse, donkey and to a lesser extent, venison and hare. It is very similar to Bresaola, the Italian counterpart, except for that it is aged longer, up to 12 months opposed to 5 months (for Bresaola), drier, and has a much stronger taste. In Leon, Cecina has been produced since ancient times; as early as IV century AD there are mentions in manuscripts about its production and consumption. So why is it not as well known as Jamon? Most likely because that up until only 20 years ago it really had no quality control, and when you ordered or bought Cecina it probably wasn’t that good. 1994 is the year that Castilla and Leon formed an organization to promote and protect the production of Cecina with a PGI (Protected Geographical Indication), which serves to regulate a foodstuff from a particular region in the way it is manipulated to preserve its heritage. The region has been working very hard to regulate the quality of the product, in recent years it is having a sort of renaissance I believe due to the specific qualities adhered to by the Regulating Council of Cecina de Leon, which are:

It took a little research to understand why the Cecina we had for Christmas was completely different to any other we had tried before. But considering how quickly it disappeared off the plate, I’m not sure research mattered. My family’s only concern is that we’ll be bringing some with us for next year’s Christmas banquet. And next year, I guarantee Cecina will be given the preferential platter and the reverence it truly deserves!

If you’re looking for Cecina in either Barcelona or Madrid, check out our tours where our recommended guides will give you the royal gastronomic tour of the best Cecina in Spain!