Baking Bread with a Portuguese Grandmother 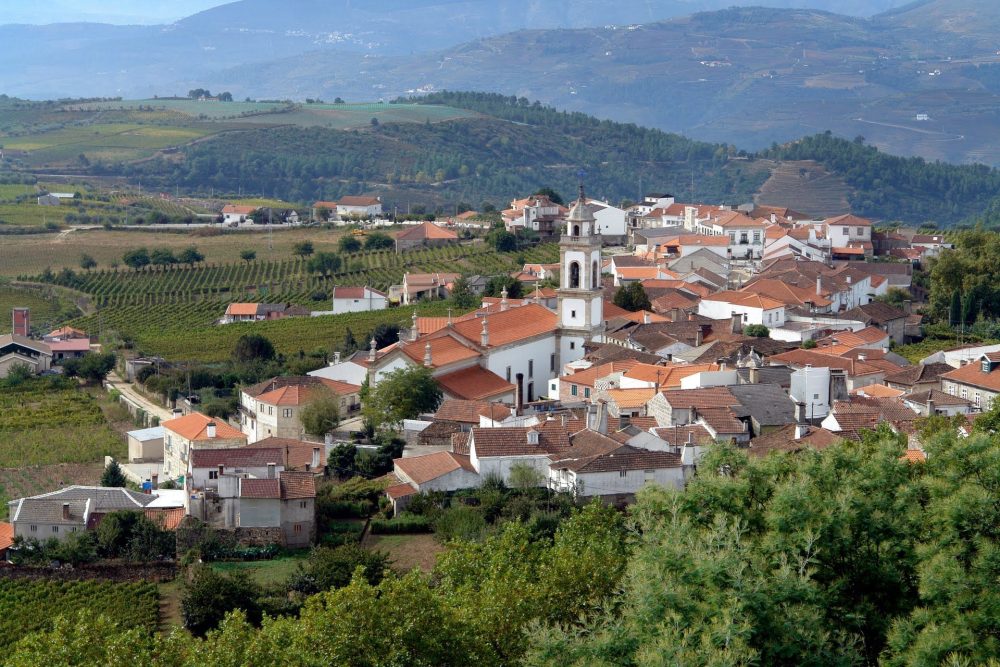 Housed in an 18th century baroque building, we leave behind the contrasting sleek interior of the bread and wine museum and step back onto the cobbled streets of the charming village of Favaios, where locals are taking respite from the intense July heat under red cafe umbrellas. We stroll towards the church as instructed and veer left in search of the old-school bread bakers (padeiras) of Favaios, our link to one of the most emblematic breads of the Douro Valley, “Pão de Favaios.”

With a few indications on a museum map, and little else but our intuition to go by, we spot a chimney spewing up tresses of smoke into the bright blue backdrop. A working chimney in 100-degree weather can mean only one thing – baking! We dash down the narrow street lined with rows of tiny stone homes towards pine branches piled up outside the door of the house with the smoking chimney. Bingo – they’re baking inside! A woman in a bouncy brown ponytail and a checkered apron points up as we begin to ask questions. “You’ll have to talk to my mother, she’s the baker.” We look upwards in unison to find a woman in a white cap smiling down on us through dangling laundry and pudgy cheeks speckled with flour. After a couple of quick exchanges, she disappears back into the window and suddenly appears next to us as if out of thin air – a magical bread baker dressed in radiant white from head to toe!

Nearing noon, we’re just in time to see her put the finishing touches on her last batch of dough before shoving hundreds of breads into her sizzling oven. Rosalia Rocha, 64, and her family run one of the four remaining traditional bakeries (padarias) in the village. It’s called Padaria Central a.k.a. Padaria da Rosalia, still baking her bread in the typical wood-burning ovens, modeled after those left behind by the Roman occupation. There are four other local bakeries in operation, but they use mixed ovens that combine both wood and electricity. This new system cuts down on how much wood is burned as well as how much electricity is consumed. However, the bread isn’t quite the same as what comes out of the wood-powered ovens, we’re told. This is why some of the most traditional bakers, like Rosalia, have resisted change. And this is what we’re after, not merely a taste of freshly baked bread, but a touch with a fleeting tradition that lives in women like Rosalia, and is becoming a challenge for new generations to conserve.

Favaios bread is the type of artisan food you’ll hardly see outside of its parish. Sadly, many of these old-school bakers keep to their village, choosing not to compete with the hordes of mass-produced options at everyone’s footsteps. And though the popularity of culinary television shows and foodie magazines have increased people’s appetites for artisan foods, specialty shops cannot replicate this experience, no matter how hard they try. Because here, at Rosalia’s bakery, every detail from the piled pine outside her door to that first bite of piping hot bread is unique to this very environment – it’s unique to her.

For instance, nothing heats up at the turn of a button. To increase the heat, the way she likes it, Rosalia burned branches for several hours that morning. The branches gradually morphed into hot embers, which are customarily pushed aside before the loaves of bread go in. The embers serve multiple uses here. After baking the bread, they’re stored in tin bins sitting beneath the oven until needed to whip up no-frills lunches and dinners for the family. The day we visited, Rosalia was roasting a chicken in one of the ovens, not in use for bread. As if that weren’t repurposing enough, the ashes from these meals are collected and sprinkled as fertilizer in the vineyards of the local “quintas” (wineries), where this wine village’s famous Moscatel wine is produced. Favaios is one of the six official wine-producing villages of the Douro Valley.

With help from her daughter, Maria do Ceu Soares, Rosalia places one loaf at a time atop a wooden paddle with a handle that stretches far enough to push each one into the depths of the oven. These ovens feature domed terracotta ceilings that trap heat and then release and radiate back into the bread as it’s slowly baking, resulting in a crispy crust and airy, moist center. These ovens are certainly key, but so is the natural yeast, or old dough (massa velha) as the bakers call it, saved from the previous day’s batch. Equally important are the age-old kneading techniques and the shape of this bread, which is also known as “Trigo de Quatro Cantos.” The kneading technique is called “tender,” referring to how Rosalia twists and turns the dough, halving it in the Favaios fashion of keeping two small oval pieces connected through a mere string to form this iconic bow-tie shaped loaf rather than “gluing” two pieces of dough together. The traditional technique gives the two pieces of dough breathing room, resulting in lighter loaves that after a couple of days are still quite soft inside.

Despite sticking to tradition, the process for these traditional bakers has become slightly modernized. For instance, Rosalia no longer sifts her flour as in olden times. Instead, she out-sources quality flour and leaves the back-breaking task of making the dough to an industrialized mixer. Though the industrial mixer can take about 100 kilos of flour, Rosalia only mixes 70 kilos at a time. She prefers this method because the machine works better and the dough becomes lighter. Before the industrial mixer, it used to take an hour to beat one bag of flour by hand, she tells us. Despite the upgrade, Rosalia keeps her 90-year-old wooden “gamela” (mixing tub) around, poising her hand affectionately on it and pointing out the dazzling stone granite it’s nestled on. Draped in white linen, each batch of dough rests on a steel counter for half an hour. Once it’s ready, Rosalia cuts and kneads the dough into shape. “I can’t do it the way she does it,” her daughter admits. “You need to have the touch,” explains Rosalia, who’s been baking bread this way since she was about 12. “Many of us already have the weight on our hands,” she adds, emphasizing the 30 years that she’s been running her own bakery. She can’t say exactly how much she cuts (talhar) for each loaf, “it’s been so many years doing this that we just know how much to cut without weighing.”

Rosalia bakes about 500 loaves a day, which her son Adelino Soares distributes throughout their parish of Alijó. Oftentimes, their regular customers come directly to the bakery to buy their bread. Some folks also pick up orders for Bola de Carne, a rectangular “meat pie” filled with a variety of olive oil braised meats that may include veal, rabbit, chicken, linguiça and chouriço. It’s a favorite during the holiday season.

Once loaves started coming out of the oven that afternoon, we were privileged enough to break bread with Rosalia and her family. Crackly on the outside, light and moist on the inside, Rosalia spoiled us with a spread of rich butter that melted immediately into the fluff of the bread’s core. Unfortunately, it’s not easy at all to find this bread too far from Favaios, but then again that’s an EXCELLENT excuse to visit this picturesque village!

Want to travel in time and taste bread baked the way only a Portuguese grandmother could, let us take you deep into the Douro Valley where the stunning views and outstanding wine are simply a scratch of the surface …