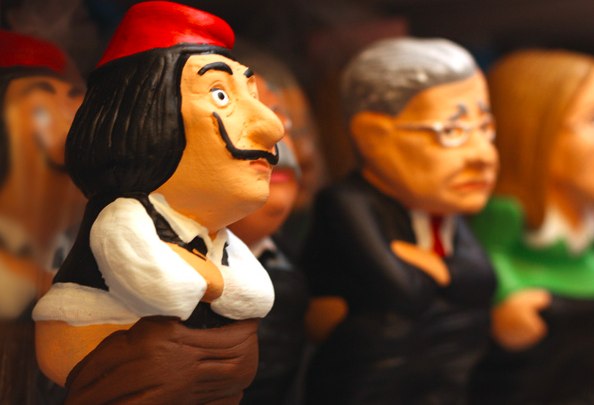 Snuggling close to a crackling fire as the bitter winds rush past double paned windows, I smile enjoying the warm smell of cinnamon and nutmeg, the clink of ice in scotch tumblers and the docile tones of Bing Crosby floating in the background. Christmas equates to everything cozy: warm nurturing foods, giggling laughter of children, and of course, the gentle blinking lights on the Christmas tree. And despite the fact that the Holidays can occasionally lead to family feuds, drunken brawls and the occasional disowning of your cousin Bob for public disorderly conduct, it has never included the celebration of poo.

Yes, you heard me correctly. Despite Catalunya’s fame for creating one of the most glorious cities in the world, not to mention an abundance of both stunning architecture and tasty gastronomy, one would be hard-pressed to understand why poo (not pooh) is so integrated into the very fabric of Catalan culture. And yet it is. Like many cultures who’ve based their existence on agriculture, Catalans celebrated nature, and there is nothing more natural than pooping. We all poop, hopefully, and a good bowel movement is not only a sign of a healthy body, but it can also help fertilize the fields and ensure a healthy crop. Consequently, many cultures have incorporated pooping into their everyday vernacular, ensuring that one of the most basic human necessities is always acknowledged and appreciated. To give some context let’s first look at the language.

And my personal favorite…

These are just a very small sample of the vast number of Catalan phrases dedicated to human waste. Granted most of these show up in various forms in all languages including Spanish, and as we all know English has its own strange fascination to bodily functions, but what most other cultures do not have have is an entire holiday dedicated to it. Hence, this is where our story veers off onto a road less travelled.

Tio de Nadal / Caga Tió Let’s begin with my absolute favorite Catalan Christmas tradition involving the Caga Tió (the pooping log). Caga Tió is a log, approximately 30 cm in length, with two front legs in the form of sticks, a red blanket to keep it warm, occasionally a wee red hat to be festive and a painted face similar to a South Park character. Always smiling, he arrives Catalan homes on December 8th, the Feast of the Immaculate Conception, with a very empty stomach requiring a massive amount of food. Thus from this day forward, it the responsibility of the children to leave small candies, water, maybe the leftover lima beans they didn’t want from dinner, to feed the Caga Tió each and every night. Come morning, these treats have “magically” disappeared deep into the disemboweled body of the log, which as been physically hollowed out so as to allow parents to perpetuate the idea of a living log, instigating an even broader smile. The better the loot, the better the chance the log will give back in equal generosity. On Christmas Eve, or Christmas Day, the “o-so-loving family” begins the celebratory process of burning the backend of their dear Caga Tió in the fireplace (assuming they have one) and ordering it to “poop”.

As if searing your dear friend’s back end wasn’t torturous enough, children then grab sticks and begin beating the living daylights out of poor Tio, all while singing one of their many twisted traditional songs: “Caga tió, tió de Nadal, no caguis arengades, que són massa salades caga torrons que són més bons!” (Poop log, log of Christmas, don’t poop herrings, which are too salty, poop nougats (turrón)which are much better!) Assuming that the Tio is still conscious (if you were able to suspend your disbelief this far), and not incredibly vengeful and bitter, it will then poop out small candies, nuts, turrons and/or dried figs. When he, at least I assume it’s a he, is finished with his generous “gift” giving, el Tió goes for a second round producing salt herring, a head of garlic, an onion or something symbolic of urine such as beer, all with a grin on his face. Classy. Then when all is said and done, he’s burned in the fire to keep the children warm. Curious…what exactly is the moral of this story?

El Caganer or as we like to call it: The Pooper Many of us are familiar with the Nativity scene, a small pastoral scene with figures representing the moment of Jesus’ birth. Put another way, we can consider them Christian “action figurines” starring: Jesus in a manger, camels, sheep, Mary and Joseph, the 3 wise men and a defecating peasant.  Errr…defecating what?! Yup, a defecating little dude. No one really knows the exact origin of the Caganer, but what is known is that this little defecating figurine has existed in the pessebre (nativity scene) since the 18th century.

Now, if you’re new to the Catalan culture, you may be asking yourself, “What is wrong with these people?!”, and you’d be very fair to ask such a question. I have yet to hear one solid reason why this tradition exists, but here are a few that have been thrown out as possible justifications:

Historically the Caganer is a Catalan peasant man wearing the traditional barrentina, a red stocking hat with a black band, but today, you can find hundreds of different versions ranging from Obama to Madonna.
When we first arrived in Spain, and encountered this little guy, our jaws dropped and our eyes popped wide open. Could this be true? We asked ourselves. Clearly, this was a joke, because no church in their right mind would allow such a practice. How sacrilegious can you get?! Oddly enough, this practice was not only celebrated by the church, but encouraged, with one condition: you may not put the Caganer by the manger. Good sanitary sense, but still doesn’t get points for style.
Summary
In no way, shape or form are we encouraging you to drop a caganer in your grandmother’s nativity scene this Christmas, though we’d pay good money to see her reaction if you do, but we are suggesting that you add a dash of excitement to your holiday celebrations. Who’s to say that reaching into Santa’s smelly stockings hanging over the fire shouldn’t be replaced with a friendly log that encourages you to release some holiday stress on his durable little frame? Or, maybe you need a Caganer to grace your toddler’s bathroom as an example as they learn the way. Our only hope is that you always try and incorporate a bit of cultural diversity to your holiday. Let’s be honest, nothing says “Merry Christmas” like poop.