Your Guide to the Best Carnivals in Spain 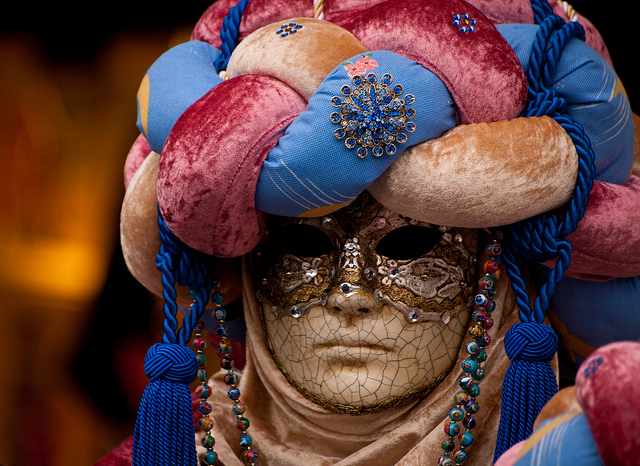 If you were to take a series of snapshots of Carnival around the world, they might all look markedly different: a painted mask floating out of the evening fog in Venice; a jewel-studded headdress on a scantily clad dancer in Rio; an enormous Krishna riding on a float down a dusty street in India. Carnival might revolve around the same central idea all around the world, but its evolution in each place reflects the specific cultural apexes of each place and time. (photo by ramsesoriginal)

A bacchanalian rite of old, the carnival was conceived of as a celebration prior to the fasting season of Lent, a time during which savoring and sinning was meant to be expunged from one’s system, perhaps though not in the way it is currently and creatively imagined. It may be hard to believe, given its hedonistic nature, that Carnival remains so closely tied to the Anglo-Catholic tradition, yet it does, at least in its ties to the religious calendar, falling approximately a month and a half before Lent and lasting from five days to a full month each year depending on where it’s celebrated.

Despite its religious ties, the festival has its other faces too, which are rooted in class consciousness and political deviance. Historically, the celebration has tended to provide an opportunity for the masses to come together to confront the class system, break down the social order, liberate one’s carnal instincts and act out against repression, both political and psychological. Alongside the more lighthearted fare, politically subversive songs and satirical costumes portraying political figures thread their way into many festivals around the world. More subtly calculated rites, such as the wearing of elaborate hand-decorated masks in Italy, have become an institutionalized part of each country’s celebrations. Long held as a way for citizens to quietly act out against repressive government guidelines, wearing masks, which were often banned from use, was a prized part of the celebration in its earliest days. Today, carnival in Venice has become defined by its masks, which lend a more mysterious, and perhaps austere, edge to their event. Nevertheless, the Venetian version is also punctuated by festive celebrations, including concerts and dancing in the plazas scattered throughout the city.

Carnival started popping up around the world centuries ago, with Venice holding one of the oldest recorded carnivals in 1268. It has gone on to become one of the most famous holidays in the world, a landmark event in countries all around the world, from South America to India. In Brazil the celebratory days are marked byhuge, organized parades in Rio de Janeiro and Sao Paulo, where participants display vibrant costumes and share rhythmic Samba music of their diverse cultures. The events in Brazil draw over 7 million visitors to the country annually, with around 5 million alone heading to Rio for the festivities there. Brazil might hold the title for the “biggest show on earth”, but Spain’s carnival is not to be underestimated. The oldest recorded carnival in Spain began in Gran Canaria in the 16th century and remains one of the most festive places to celebrate in the country. It’s not the only one, however. If you find yourself in Spain in February, looking for the biggest party in town, the guide below will get you started with a few of the best. (photo by ramsesoriginal)

Many argue the place to be during Carnival is Gran Canaria, where the annual festival pulls in over 200,000 people to its biggest city, Las Palmas, to celebrate island style. The festival has a long history on the island that reaches all the way back to the 15th century.Over the years, the festival has grown and evolved into what we see today. It wasn’t until the 19th century that the festival inaugurated its first parades with accompanying floats, a hallmark of most carnivals around the world. However, the 20th century saw the celebrations brought to a halt there and in the rest of Spain, as the carnival–known historically to be subversive and critical of power–was suppressed by the State during the Civil War and for the years of Franco’s reign. It maintained a discreet presence after being reincarnated under the vague moniker of “Winter Festival”. After the dictator’s death in 1976, the city regained permission to revive their celebrated street festival after 40 years of prohibition. In 1998, the city formed the first drag queen gala which was an immediate success and is now the event for which it is best known and has helped to define carnival as the island’s main tourist attraction. The main parade, known as the “Cabalgata” makes its six kilometer route across the city, while at the Parque de Santa Catalina, the competition is held to decide which competitor will take home the prize as best drag queen. The traditional Queen Gala finishes out the carnival while the funeral of the sardine is held on the 21st, officially signaling the end of carnival on the island. The final parade crosses the city and ends at Las Canteras Beach, where a giant paper maché sardine is burned in a symbolic rite that symbolizes the spirit of the carnival while a brilliant fireworks display closes out the evening.

Tenerife, January 21-February 22Like Venice, Tenerife, too, holds a spectacular month-long celebration in its capital city, Santa Cruz de Tenerife, with day and night celebrations awash in floats, parades, masked dances and shows. The elaborate costumes–covered in sequins, crusted in gemstones, and blooming with feathered headdresses– are a show in and of themselves and call to mind the grandeur of the Brazilian carnival. This year’s theme, “The Future”, promises to be one of the most intriguing yet. Costume contests run throughout the month, with the hallmark crowning of the carnival queen landing on February 4th this year. The biggest celebration is the second to the last evening of the festival, on February 21st, when people pour into the streets for a final night of music, dancing and revelatory fun.  (photo by Stefano Montagner)

Another Canary Island which throws a spectacular show during carnival is La Palma, where they have a slightly different take on the traditional carnival fare. In Santa Cruz de la Palma, the main parade–which falls on the 16th this year–is a vision in white. Women wear white dresses, men dress in white linen suits and talcum powder flies haphazardly filling the air while bright Caribbean rhythms echo through the streets. This part of the celebration is known as the “Indios”, the straw hats and white island dress a reenactment of the Palmero immigrants who returned to the island from Cuba. Cross-dressing also plays a disorienting role with many men decked out dresses, wigs and makeup.

If you find yourself in the region of Asturias in north central Spain during carnival, the city of Avilés is the place to be. The city holds its own small carnival–a pared down version of the larger parties in the south–filled with music, dance and costumes. You should be glad you’re there–if for the tart sidra alone–because their version of carnival adds an atmospheric touch to this often wet, rainy coastal region. They too close their festival with a funeral for the sardine and burn it at the end.

Located in Andalusia in southern Spain, Cadiz holds a festive carnival celebration filled with lighthearted costumes and traditional songs filled with irony, which make jokes, social satire, and political criticisms a strong part of the annual tradition. Like the other carnivals in Spain, the celebration disappeared from the official registry of the city during the Franco years, but that didn’t stop celebrants from getting together during the month of February outside shops and in public spaces to sing carnival songs and to keep the latent spirit of their favorite festival alive. Today’s carnival is well known for its vocal ensembles, which echo the fierce traditions and embody the memory of the festival’s long history. Another element that distinguishes the Cadiz carnival from others is its gastronomic element, marked by several key events, the pestiñada, the erizada and ostionada, which celebrate Andalucian pastries, spiny sea urchins, and oysters, respectively. Some of the stops on the gastronomic tour are by invitation only, but there are several opportunities for free food tastings for the public. On the Sunday of the festival week, the parade known as “Domingo de Piñata” takes place, an event that is fun for people of all ages. (photo by Stefano Montagner)

For those who can’t make it to the islands to celebrate, a smaller yet no less spirited version of Spanish carnival can be found in the small city of Sitges, a half hour train ride (38 kilometers) south of Barcelona. This pretty little seaside town is known for its white-washed stone buildings, gracious cathedral, and wide swath of Mediterranean shoreline. It’s also home to the International Film Festival of Catalunya and a thriving gay community. But ask any local about it, and they will often first identify it as the site of the second best carnival in Spain. While it’s certainly smaller than those in the south, the event is nevertheless a point of pride for Catalunya. The festival runs for a week, and the party goes on all night long, with the clubs and bars open late to accommodate the influx of party-goers. The costumes are more Halloween than Brazilian, with plenty of drag queens mixed in. As the night wears on, the streets become filled with people disguised as a colorful cast of characters, from the well-known to the eclectic, drinking mojitos from street stands as music blares out of the bars that line the narrow streets. A gaggle of oversized Smurfs might wander by, followed by several nearly identical Mozarts, and a chicken or two. It may be smaller, but Sitges’ carnival is no less hedonistic than its island counterparts. Families will find the afternoon parade worthwhile entertainment while those looking for the real fiesta will stay long into the night. The party goes until sunrise, when fiesteros head to the beach to watch the sun come up over the water and mourn the end of another memorable carnival.

Carnival celebrations around the world are a sight to behold, but Spain brings its own particular flair to the tradition. If you don’t have plans to visit yet, make them, because this is one fiesta you don’t want to miss.