A Masterclass on Portuguese Fish 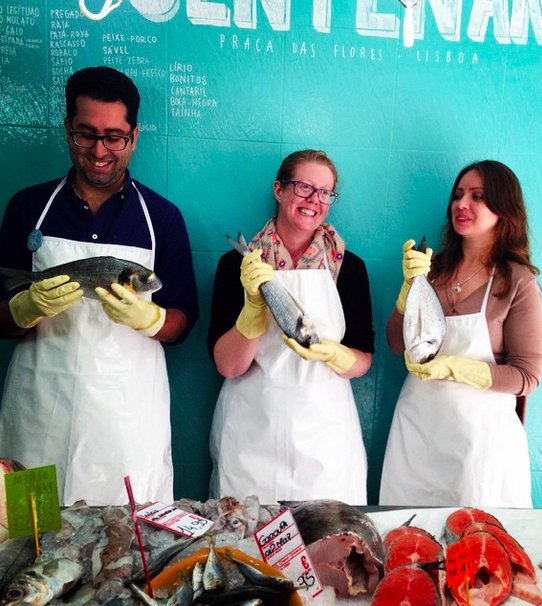 When most people order a meal at a restaurant, they’re satisfied with simply eating it. Not me. I have an overwhelming necessity to understand and intimately discuss the food in front of me. I long to linger around the restaurant, waiting for closing time so I can sneak into the kitchen and snuggle up to the chef to inquire about the origins of the food on my plate. Sounds a “tad” cuckoo? It should, because that’s exactly how it feels. Especially, when you’re trying to hold up a coherent conversation with company while all of these thoughts are invading your mind; a challenge I have to meet quite often.

This is even more problematic when I visit Portugal—where so much interests me culinary-wise, yet I have only had time to scratch the surface of it all. I blame this glutinous despair on my parents for uprooting me from this gastronomically-rich country when I was just getting a taste for it. Rule: Always blame the parents! (photo credit: Chili Com Todos)

One of my food obsession triggers is fish. I never leave Portugal without enjoying a few authentic fish dishes—like a lunch of “Peixe Grelhado” (grilled fish), “Caldeirada de Peixe” (fish stew) or “Peixe Frito com Arroz de Tomate” (fried fish with a saucy tomato rice). But though these meals are tremendously satisfying, they also raise all sorts of questions for me—all, while I’m wondering about everything else on the menu that I’m NOT eating. Don’t get me started on Portuguese shellfish …

Not to worry, though, admitting you have a problem is one step closer to recovery. And on my last visit to Portugal, I started working towards satisfying my hunger for Portuguese food knowledge by taking Lazy Flavors Taste & Explore up on their invitation to join them on a  “Masterclass on Fish” in Lisbon. The tourism company specializes in authentic, hands-on culinary experiences in Portugal.

I met my eager “classmates” and delightful guides at a whimsical kitschy pink kiosk with a white lacy trim nestled curbside to one of the city’s lovely parks, o Jardim do Principe Real, home to a knotted and twisted 100-year-old colossal cedar canopying all life scampering underneath it. Lisbonites lounged around the kiosk and park benches sipping old-timey juices concocted with xaropes, inspired by the gooseberry (Groselha) syrups Portuguese grandmothers spooned into water-filled glasses to create juices for the little people in the family. Having spent part of my early childhood in Portugal, this was a sweet blast from the past … The endless sunlight and soft fall breeze surely contributed to my delight, as did the easiness seeping into the atmosphere as the late morning ushered in Portugal’s favorite time of the day, o almoço (long, lazy lunches).

This tour was definitely off to a wonderful start! Our guides, Mariana and Veronica, could have chosen to meet us at the fish market where the class was scheduled to take place; instead they picked this park with loads of local charm, and perfectly glued to one of the city’s most iconic hilltop “Bairros” (neighborhoods), the Bairro Alto. At the very top, this allowed us to stroll through Lisbon life, where trendy new restaurants and boutiques collide with neighborhood grocers, painting the narrow sidewalks with orange and blue crates brimming with tomatoes, chili peppers, carrots, garlic and onions, and side-by-side with bakeries crowded with coffee fiends sipping espressos and enjoying a sweet treat from assembly line displays of the egg cream pastries synonymous with Portugal. Gradually, we leave behind the aromas of roasted coffee and scents of sugar to descend, but stop abruptly stunned by a postcard scene of cobblestone leading our eyes to the sparkling Tagus River (Rio Tejo) far in the distance, framed by rows of pastel pink, blue and yellow historic buildings, with the occasional veranda adorned with Portugal’s trademark of freshly-hung laundry swaying in the breeze.

We turn into Praça das Flores (Flower Square), tucked into a section of the Principe Real neighborhood where life converges around this fountained courtyard, home to another cutesy kiosk—this one in lavender and white. The tree-filled square is livened by mini markets, a butcher shop, a pharmacy, a wine bar, cafes, a handful of restaurants and a centenarian fish market, named none other than “Peixaria Centenária.” (Centenarian Fish Market).

The fish market wasn’t ready for us yet, but our smooth operating guides didn’t have us wait around the door, instead they directed us to that playful kiosk across the street. They bought us a drink and sat down to keep us company. This seems to be the trick to their tour concept at Lazy Flavors—treating themselves as part of the group. They don’t appear detached and nothing feels rehearsed—a trait often typical of tours. Their vision is inspired by the Portuguese lifestyle of making memories through food, and lazying around with friends over prolonged meals, a drink and casual conversation. With Lazy Flavors, it’s like spending an afternoon with foodie friends that know the city inside and out. Mariana and Veronica are certainly putting their foodie knowledge to good use, helping visitors avoid tourist traps, while sharing with them the most traditional and avante-garde flavors that the country has to offer through their relaxed gastronomical experiences.

A few minutes later, we stepped into the fish market. Bet you’re thinking this fish market is run by a bunch of big-bosomed, oldie but goodie fishwives aren’t you? Nope. The fish market is run by a group of hip, young professionals with boatloads of fish in their DNA. They’re heirs to three generations of fishmongers, and are so good at what they do that the customers that came in throughout our session were in fact old school women from the neighborhood.

A seal of approval from these ladies means you’re doing something right!

The tiny space is artfully designed with high plaster ceilings ornamented with chandelier medallions that connect to hanging fisherman lamps. Lots of sun shines in through the wall-sized door that opens to a clear view of the pretty park across from it. The airiness of the fish market harkens to traditional open-air markets with traces of stone peeking through the white washed walls with one painted in turquoise tying together the refreshing look and feel of this shop.

In white aprons and yellow rubber gloves, we lined up along an ice bar blanketed with a wide assortment of sea creatures—Carapau (Mackarel), Robalo (European Seabass), Lulas (Squid), Lingueirão (Razor Clams) and more. Our “teachers” selected the Dourada (Gilthead Bream), one Portugal’s most popular fish, for our lesson on filleting. Before getting started, we learned a few tips on how to identify fresh fish. Use all of your senses!

SMELL If there’s an intense smell, as if that fish “decided” to go sunbathing, or it reeks of ammonia—refuse it. Fish should smell like nothing more than a sweet and salty sea breeze.

LOOK The skin should be bright; discoloration is a bad sign. When the fish isn’t fresh, it turns dull and its scales begin to easily detach.

TOUCH The flesh should be firm and elastic, bouncing back at the touch. Gradually, the skin softens and loses elasticity turning reddish along the spine, which begins to break instead of bend. (photo credit: Lazy Flavors)

EYES The eyes should be protruding with shiny black pupils and a clear cornea. If the eyes have caved in, the cornea is opaque and the pupils gray, the fish is no longer in its best condition.

GILLS They should be a vibrant red and free of mucus. Over time, the gills turn yellow and build up a milky mucous.

SENSE And remember to trust your intuition. If something just doesn’t seem right, don’t buy it. Move on to another fish or vendor.

Next up, we got hands-on with the fish.

Whole fish meals are more common than fillets in Portuguese cuisine, but there are a few recipes that call for them. And as to be expected, you’ll find haute cuisine versions at high-end restaurants. Now that I have filleted my own fish, I tip my hat to chefs that do this regularly—it’s quite laborious, or so it seemed to a newbie like me. It takes lots of patience, preciseness and concentration. It’s also quite wasteful, a reminder of why prices for these meals are usually high. The good news is that the discarded parts can be saved to whip up broths or soups.

If you want to challenge yourself, here’s a taste of what you’re in for when filleting.

One constructive tip for our tour guides: Consider having a cheat sheet for your guests, so that they can go home with notes on what was covered in the class. This is key for food geeks like me, who want to take notes but can’t because I’m wearing rubber gloves covered in fish guts. This is terrific for the sensorial side of the tour, but for knowledge gathering not so much. If I hadn’t followed up, I probably wouldn’t remember these “classroom” steps.

Once our session was over, we packaged our fillets and carried them over to our next destination. Just a few steps from the fish market, we arrived at deCastro bistro. Owned by one of Portugal’s top chefs, Miguel Castro e Silva, who puts a refined twist on traditional Portuguese dishes—and for tour guests, he incorporates whatever food is brought over to him into the meal. From pillowy codfish cakes that dissolve in your mouth to a wine collection hand-selected by the chef—e.g. Rui Reguinga in the Alentejo and Quinta do Ribeiro Santo in the Dão, the Miguel Castro e Silva editions—to the fish you filleted transformed and served by the chef himself, the experience is delivered with no rush at all, staying true to Mariana and Veronica’s concept of lazying around. I could not have felt more like a fish in water! (photo credit: Lazy Flavors)

Did this “cure” my food cuckoo-ness? No, but it did help calm it a bit while I was working on the fish. The task at hand was all I could think about—probably, the reason why I love cooking. I realized that more hands-on culinary experiences in Portugal are what I need to “recover.” Learning from the other side of the Atlantic is no longer enough. And thankfully, Mariana and Veronica have a series of similar tours on a variety of foods to offer—one even gets you out onto the water with fishermen. Reel me in, ladies!