Part 2: Cutting up the Iberian Pig 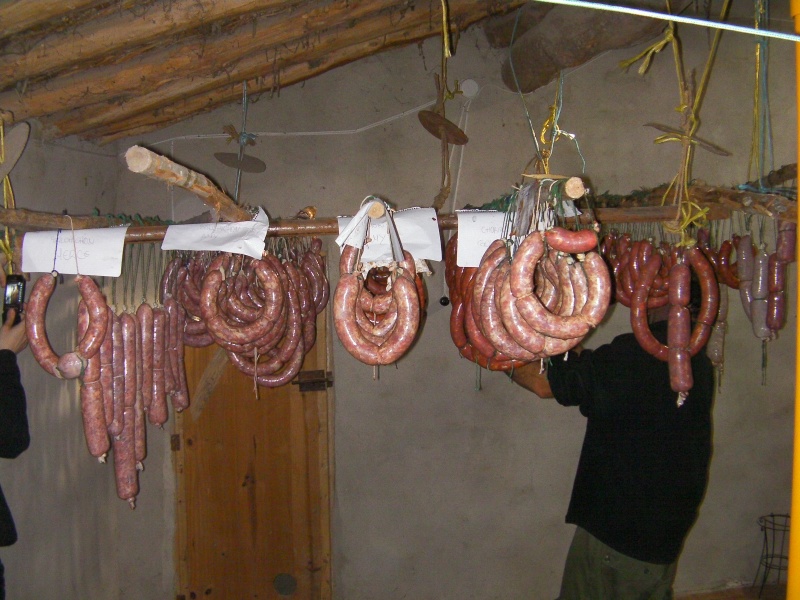 WARNING: This post is extremely graphic; however, it does depict the very real act of processing an Iberian pig after the Matanza(Killing). If you are someone who is an animal lover, or gets squeemish at the site of bodily fluids, we might suggest you skip this article and await happier articles of drinking wine by the sea. Please read part 1 here: La Matanza if you want better context to this story.

Part 2: Cutting up a pig

Now that the dead pig has been cleaned and prepared, the fun begins. Before the massive corpse is transported a few hundred metres to a shed to be butchered, Luis and I hold a rear leg each while Alvaro takes a knife and slices down the animal’s belly. On this occasion, the blade nicks an edge of the beast’s lower intestine and an intense, gagging smell of pre-fecal matter is up our nostrils within seconds. Everyone groans, curses Alvaro, and then laughs through the stench. . Placing a very large container on the side of the skeleton bed on which the pig has been prepared, we tip the sow on her side and her innards spill out of the cut and into the bucket.

There are distinct jobs during the matanza and generally, I have noticed, they are divided up by sex. Men kill and butcher. Women clean tripe and make blood sausage. Everyone comes together to make the chorizo at the end. Selfishly and shamefully, I am glad to be a man in a chauvinist’s world as I watch Alvaro cut the colon that keeps the innards attached to the pig and cart the whole, foul-smelling, wobbling mess off to the women waiting in a backyard with hot water and vinegar.

We bundle the pig onto a trailer (although I have known it be strung up again by a tractor and paraded down the street to the waiting garage) and drive it 50 metres down the road. As we’re walking Luis taps me on the arm after he’s lit a cigarette.

‘You know those hooves Alvaro gave you?’ I nod. Alvaro had pried the burned cones off the animal’s feet and handed them to me, saying they were important, and for the vet. ‘Well, that’s a bit of a joke. They’re rubbish. They’re not for the vet. Alvaro plays that one on people. You know what he’s like…’ I feel into my pocket and bring out eight blackened hooves that smell of toasted faeces.

My intense humiliation turns into brief anger which turns, as it must, to a resigned smile and then, indeed, to vengeance. As we walk into the garage, I slip the hooves into Alvaro’ coat pocket hanging in the doorway. It takes a while for my eyes to accustom themselves to the darker surroundings.

A short bench, whose edges are rounded and notched, stands across the middle of the garage. Large plastic buckets and wooden troughs line the walls. A large cigar box – probably a relic from a wedding – lies open on a chest freezer, its contents an assortment of knives, some of which look like they were homemade by the inmates of a prison.

The pig is hauled in and its back laid along the bench. The head is the first to be removed. Then the sirloins are stripped from it. Once these are removed, Juan produces a small axe similar to a tomahawk and with a mallet he and Alvaro remove the spine from the carcass. Then follows a bout of cutting, slicing, whacking and tearing. Unnervingly the meat is still warm and within seconds everyone’s hands are greasy with animal fat.

There is a special technique for removing each side of the ribcage more or less intact. It involves a slice between two upper ribs to gain a handle and while one hand lifts, the other cuts the ribs free, turning them into a rack of ribs. All such bits are thrown into a bucket or trough, depending on their further use.

No one really makes jamon here (the climate is not as dependable as it is in the mountains further south) so trotters are cut free and whole legs put to one side. The trotters land in the trough with the head and spine. Once the pig is in more manageable chunks deboning and the like take place on a black table that has been brought in and placed in the centre of the room. As I’m deboning a leg as best I can (one finger in the tuber calcaneus the other whipping around the bone with a slim knife) I look up to see three generations in tableau. Alfonso the granddad has relegated himself from cutting up to sharpening knives and his gently trembling hands work the blunted blades on a belt sander. His son is dealing with the other rear leg opposite me and behind him, his niece is looking on with curiosity.

When all the meat is removed and the fat trimmed as best it can be, it all goes through a coarse mincer. This is where it gets divided up between people and styles. The meat destined for chorizo is mixed, by hand, with endless packets of Pimenton (Paprika). Each family has its own recipe for salchichon but we used a good dose of white wine, a touch of mace and whole black peppercorns. Once each 15kg mash of flesh and ingredients is mixed up by hand and patted down, it sits in the cold garage overnight to be fed into the casings (read cleaned ‘intestines’) the next day. This is the job where everyone comes back together to tie up the sausages, prick them with a set of forks so old they probably date back to the French occupation in the early 19th century, and hang them up in a cool, airy attic.

For now, though, most people light up a cigarette and have a beer – some are more unconscious than others that they are flicking tobacco ash liberally and equally over concrete, offcuts, prepared mince, meat and bones. Hygenie is, generally, not a priority at this time of year. I walk into the kitchen through the back door and see a grandmother, elbows deep in a bucket of crimson blood, trying to stop the mass from coagulating while her daughter pours in a packet of flour. They are making blood sausage. By now, thoroughly used to blood, bones, anatomy, meat, flesh, fat and everything else, I barely give them a second glance.

Within an hour, after a bit of a clean-up of hands, clothes and faces, we sit down to the traditional dinner of chichas (the coarse, paprika mince) and other cuttings (viz. cheek, etc.). Juan hands me a plate of something. It looks slightly meaty, quite fatty but tastes absolutely fantastic. What is it, I ask.

Come on, Juan, what cut is it?

‘Secreto,’ he says again, with more emphasis, while he lifts his arm up and points to his armpit with his fork.